"Dirt" (2008) by David Montgomery deals with the relation between soil erosion and civilization collapse. It is neither the first nor the only book that examines this subject. It is, however, written by a soil scientist, and it brings to a deeper level the understanding of how soil disappears and how this affects agriculture and, in turn, society. 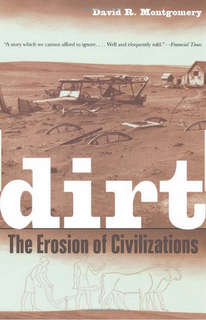 Dirt: The Erosion of Civilizations by David R. Montgomery

Was the Roman Empire doomed by the loss of fertile soil to erosion? This is a much discussed point that I also examined in a study of mine on the fall of the Roman Empire

http://europe.theoildrum.com/node/5528 . Fertile soil generates food that, in turn, causes population to increase and that is what makes an empire able to expand, as all empires do. But fertile soil is also subject to overexploitation. It is fragile; is easily washed to the sea by rain. And, when it is gone, it takes centuries, at least, to reform.

So, did the Roman Empire collapse because of soil loss? Historians are still debating this point but, in this book, "Dirt", David Montgomery makes a forceful case that soil erosion was a major cause of the decline of the Roman economy and that, in general, it strongly affected ancient civilizations. Montgomery connects the dots of what we know and shows - among other things - that the Romans clearly understood the importance of agriculture in their economy. Yet, they never were able to understand the role of soil erosion.

Of course, there are alternatives to the simple linear chain of positive feedbacks that goes as more people -> more land cultivated -> more erosion. The sources tell us that many fields went uncultivated at the time of the Roman Empire and that suggests the possibility of a problem of underpopulation. The military needs of the late Empire were so strong thet there were not enough people left to cultivate the land. There is also evidence of droughts at the time of the decline of the Empire which would have affected agriculture, too. None of these explanations excludes the others. In a complex system, there is no simple cause and effect relation. Everything affects everything else and you need good quantitative data to understand the weight of all the factors involved. Unfortunately, good quantitative data is exactly what we are missing for the Roman Empire. But, on the whole, it is clear that soil erosion is a major element at play in the decline of civilizations. The Romans, as many other civilizations before and after them, were destroying their resource base, soil, and they never were able to replace it.

There is much more in Montgomery's book - it is a comprehensive review of the relation of soil erosion and the history of humankind that starts from the end of the last ice age and arrives to our time. As such, it is a great learning experience. Of course, the book is not without defects. Stuart Staniford correctly points out that often Montgomery doesn't give a sufficient justification for his statements and that leaves the reader unsatisfied

http://earlywarn.blogspot.com/2009/12/dirt-erosion-of-civilizations.html . This is true especially for the last chapter, where the text becomes somewhat ideological when Montgomery tackles fields which are not his: peak oil, energy, and the economy. The result is that the discussion becomes shallow, unlike the rest of the book.

Apart from these problems, "Dirt" is an absolutely must read for the serious students of civilization collapse. It is the same for those who still insist in defining biofuels as "renewable energy."