Sunday December 27th marks the anniversary of the attack on Gaza by Israel, which left over 1,400 people dead, and over 5,000 injured in 22 days.

At 11 35 am, the time of the first attack, a group of humanitarians on the “Viva Palestina Convoy” will embark on an International Hunger Strike in the main square in Aqaba, Jordan. 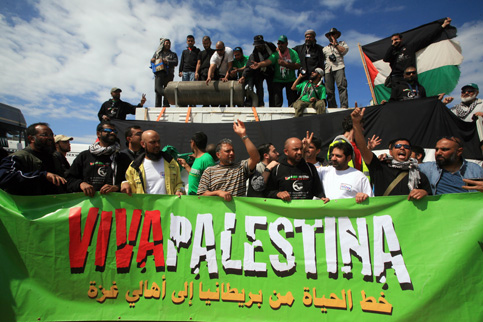 The International Hunger Strike will aim to highlight the ongoing illegal siege imposed on Gaza, and to remember the victims of the attacks who died during the 22 day bombardment by Israel.

This International Hunger Strike will also highlight the refusal by Egypt, under Israeli pressure, to allow the humanitarian aid to reach the people in Gaza.
The convoy has been stranded in the city for 3 days now, having been refused permission to enter Egypt on their way to Gaza. There are 500 people from no less than 20 different countries in 250 vehicles loaded with charitable humanitarian aid. The convoy is been led by leading international politician George Galloway, having left London on December 6th.

Embarking on the International Hunger Strike are 15 people from different continents across the world. Among those taking part are Fatima Mohammidi from the United States, John Hurson and Caoimhe Butterly from Ireland, Ahasan Shamruk from Palestine, Nidal Hajaj, Hanan Chehata and Mohammed Shakiel from England, plus Kamal Mashni from Australia among others.

Each day, 15 more people from the convoy will join in the International Hunger Strike, and they will go without food until the convoy is allowed to enter safely into Egypt, and through the Rafah border to Gaza.

Speaking from Aqaba, Ahasan Shamruk, said, “I am joining this Hunger Strike to draw attention to the fact that the siege is a form of collective, sustained, and devastating punishment of 1.5 million civilian people. As we commemorate the first year anniversary of the massacres, it is important to remember, that for my brothers and sisters living under siege in Gaza, the war has not ended.”

John Hurson, from Tyrone, who traveled on the first “Viva Palestina Convoy”, decided to join the International Hunger Strike to draw attention to the fact that nothing has changed in the past year following the attacks.

John said, “from my time spent in Gaza, to think that in the year 2009, people are denied all the basic essentials in life, like water, electricity, medicine, blankets, books, and even footballs for the children, is just unbelievable and unacceptable.

“For Egypt to prevent this compassionate and charitable aid, donated by ordinary caring people from all over the world, unnecessarily adds to the hardships currently endured on a daily basis, by the besieged and distressed people in Gaza.

I am hopeful that the leaders of the West will exert their influence, put pressure on Egypt, the United States, and Israel to end this inhuman blockade forced upon Gaza, and allow for the safe passage of this essential humanitarian aid. Enough is enough, this has to end now, for the sake of humanity.”