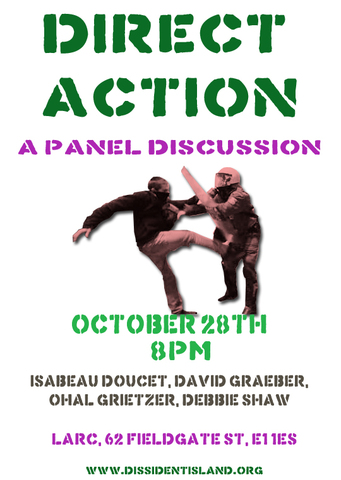 The event is inspired by, and a celebration of, the recent release of David Graeber's book "Direct Action: An Ethnography". The panel and audience will be asked to reflect on the anarchist movement and various tactics of direct action since the turn of the millennium, in the lead up to Copenhagen and beyond.

The discussion will be broadcast live, online (via players on dissidentisland.org and IMC London), and available for download shortly after. We'll be setting aside a chunk of time for audience participation, questions and comments - so come along and bring your views!


The discussion will be followed by a low-key social with DJ Ursa (centrifuge), DJ Steene - playing dubstep, drum'n'bass, jungle.

Some background on the panelists:

Isabeau Doucet: Isabeau Doucet participated in her first direct action protests at 15 with Montreal-based group SalAMI and later CLAC, which David writes about in his book. More recently, she helped found Barriere Lake Solidarity, which campaigns for the Canadian government to respect the rights of an Algonquin First Nation community, and helped curate a Dissident Art exhibition in Montreal. Since moving to London to study Anthropology at Goldsmiths, she has become a militant Climate Camper, and hopes to defend the rights of bicycle clowns and trickster protest puppets.

David Graeber: David is an anthropologist and activist who teaches at Goldsmiths, University of London. Active in numerous direct-action political organizations, he is the author of Fragments of an Anarchist Anthropology; Towards an Anthropological Theory of Value; and Possibilities: Essays on Hierarchy, Rebellion, and Desire.

Ohal Grietzer: Ohal spent the past year in Israel-Palestine where she participated in direct actions against the occupation and has been mainly involved in the popular struggle against the construction of the apartheid wall in the village of Ma'sara. Ohal has also been active in the struggle against the systematic oppression and abuse of migrant workers in Israel. She currently resides in London and studies Anthropology in Goldsmiths.

Debbie Shaw: Debbie is a senior lecturer in Cultural Studies at the University of East London. She is the author of Technoculture: The Key Concepts and Women, Science and Fiction and a member of the rampART collective.

Some more words on David's book:

In the best tradition of participant-observation, anthropologist David Graeber undertakes the first detailed ethnographic study of the global justice movement. Starting from the assumption that, when dealing with possibilities of global transformation and emerging political forms, a disinterested, "objective" perspective is impossible, he writes as both scholar and activist. At the same time, his experiment in the application
of ethnographic methods to important ongoing political events is a serious and unique contribution to the field of anthropology, as well as an inquiry into anthropology's political implications.

The case study at the center of Direct Action is the organizing and events that led to the dramatic protest against the Summit of the Americas in Québec City in 2001. Written in a clear, accessible style (with a minimum of academic jargon), this study brings readers behind the scenes of a movement that has changed the terms of debate about world power relations. From informal conversations in coffee shops to large "spokescouncil" planning meetings and teargas-drenched street actions, Graeber paints a vivid and fascinating picture. Along the way, he addresses matters of deep interest to anthropologists: meeting structure and process, language, symbolism, representation, the specific rituals of activist culture, and
much more.

The book is available from AK press.