SINCE the removal of the 'Marine Gate' 'Blade Blockade', and the Turbine Blades that remained in the Vestas Blades UK factory on St. Cross Business Park, Dodnor Lane, Newport, Isle of Wight, campaigners have been sorting out the original 'Magic Roundabout' Camp, and considering strategy.

A Marquee has been erected and a fair amount of furniture skipped / built to make the area comfortable and well-resourced in terms of power (80-odd watts of solar power for phone and laptop charging), a solar shower, and spare tents for visitors.

The campaign to keep the Wind Turbine Blade Factory on the Isle of Wight (the only sizeable renewables production facility in the UK) open was featured heavily in the national news media in July and August. Media, and activist, attention was grabbed by the Occupation of the offices at the factory by a small number of the 600 workers who were to lose their jobs (more would have occupied, but the management were tipped off, and the occupation had to be moved forwards).

The occupation began on July 20th. Vestas failed to sort out their eviction order the first time, meaning the occupation lasted 10 days beyond the closure of the factory on July 31st. Workers remained on full pay during this time, and many workers entered the company redundancy scheme thanks purely to this (Vestas was to refuse them any redundancy despite the fact they were days from the minimum time needed). This was one of many small victories.

With the end of the occupation, many in the local press spoke of the 'end of the campaign' - no doubt in part thanks to ideas put out by Vestas themselves. On the contrary, rallies and meetings continued, the local JobCentre was 'Rushed', demos happened around the Isle of Wight and nationally, including one march which ended with local campaigners and supporters invading the Vestas site, and temporarily occupying the factory (leaving of their own will).

Focus then shifted to the Wind Turbine Blades that were being stored both in Southampton (109 blades) and the St. Cross factory (9 blades). Activists occupied a crane and two barges in Southampton, and blockaded the gate wherby blades were moved to the River Medina on the Island. Vestas security attempted to make it known that Vestas were unconcerned about the 'Blade Blockade', but activists estimated the value of the Blades at £750,000, and the police operation to evict the camp suggests some degree of importance attached to the removal of the blockade. 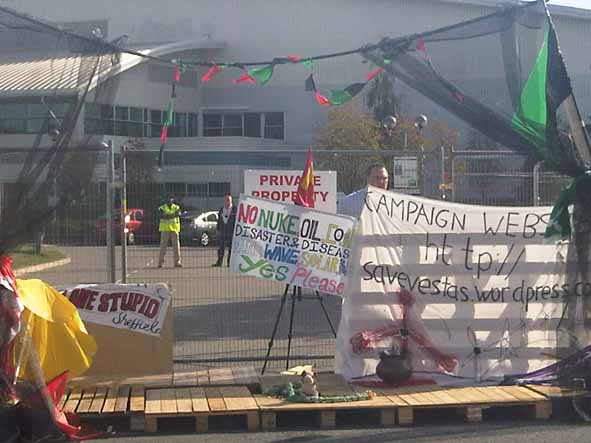 Up until the eviction of the 'Blade Blockade', the police presence has generally been low and reasonable. Officers constantly repeated the line in informal police liaison that they "were neutral" and there to facilitate peaceful protest. Very few arrests have been made.

Last week 120 officers were drafted in from the mainland, arriving at the 'Blade Blockade' at 6.30am. The cyclepath over which Blades had to be taken to reach the river was shut off with harris fencing, and lines of police. 13 people were arrested for "having committed, committing, or about to commit the offence of aggravated trespass", but as I understand it none were charged later. Workers (including several of the original occupiers) and supporters were present with banners and chants, but the blades were removed from the factory. Also removed, by police, were various items found at the Marine Gate camp - including a tripod, various tables, a brazier, a large tarpaulin, tents, and much else besides. Apparently this is available for colelction but one attempt at least has been met with a failure to return goods confiscated.

Shortly afterward, Vestas installed new Harris fencing expanding their "perimeter" (now including the infamous 'Vestas Oak' - "from small occupations, mighty revolutions grow"), putting up 'Private Property No Trespassing' signs', and strengthening triangles in the fencing, and denying the campaigners the option of hanging banners on the fencing.

Since the eviction of the Blockade camp, workers and campaigners living at the site have concentrated on a massive tidying operation. Banners have been hung in front of the main gate by other means, and a marquee and stage area erected. Local skips and plentiful and provide a variety of useful furniture and raw materials for the construction of tables, shelving units and the like. The Marquee is becoming a social centre of sorts, with information from the different groups present (Vestas campaign, Climate Camp, Climate Rush, Bicycology, Alliance for Workers Liberty, SWP, Socialist Party) - and more on it's way. There's a solar powered mobile charging point and stereo, a solar shower, a 12 seater dining/meeting table, a radical library and photo/newpaper history of the campaign.

Vestas workers have had appeals against their dismissal (essentially against the closure of the factory) this week, and they and others have been visiting the camp more than they have recently had time/energy too. A positive local news story on 'life at the camp' seems to have inspired more locals to visit out of curiosity, and with Film Nights, National and Local Meetings, an advertised restaurant evening and even a 'girls night in' planned, things are looking interesting.

The Fight Goes On. We ain't giving up on this one! Come and Join Us!

(Fighting for 1. Reinstatement of the sacked occupying workers - owed £45,000 redundancy collectively. 1.b) better redundancy for all. 2. Re-opening of the factory. Ideally under worker control, through nationalisation if necessary, bought out by a consortium, or re-opened by Vestas as alternatives. 3. A decent energy strategy from the government and IOW council regarding production of energy through renewables, and production of the renewables kit on the IOW and in the UK. Ed Miliband is soon to meet Vestas management. Don't let either of them get away with rhetoric and PR)