Around 25 workers have occupied the second floor of the offices of the Vestas St. Cross factory in Newport on the Isle of Wight, the UK's only industrial-scale wind turbine blade factory, following mounting concern over its planned closure on the 31st July. They are calling for government intervention to save the plant, jobs, and to ensure fair redundancy packages. Since the first day of the occupation on the 20th July the workers have been besieged by police and private security, with 15 arrests being made (as of 28/07), mostly for 'breach of the peace' as people tried to join and get food to the occupiers. A large crowd of fellow workers, locals, and environmental campaigners from around the UK have gathered outside the factory gates to show their support. 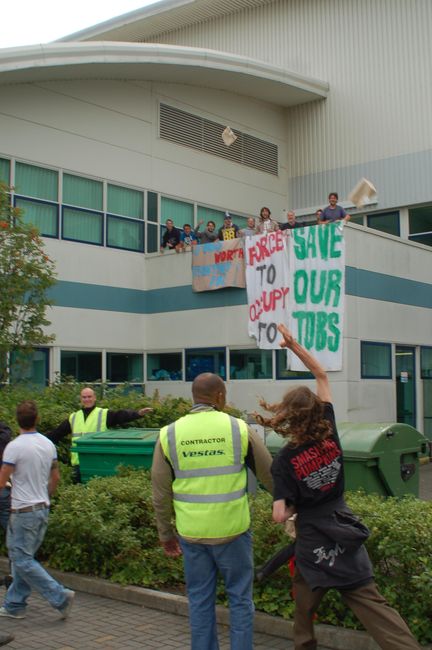 The St. Cross factory in Newport on the Isle of Wight, which is owned by the Danish company Vestas, makes wind turbine blades for the American market, but the company, despite seeing its profits double in the past year, now wants to move production to America claiming problems with planning and demand in the UK prevent it from adapting the factory to the UK market. The closure of the plant had been discussed for over two years but government inaction and a lack of unionisation (partly due to an entrenched culture of bullying and persecution of organisers by management at the plant), against a background of deeply conservative local politics on the island, have led to the current crisis on the Isle of Wight and at another Vestas site in Southampton.

The St. Cross plant is formally scheduled to close for production on the 31st July and workers have been offered a pitiful £9,000 redundancy package with the reality that many will have to move themselves and their families to the mainland, in the midst of an economic recession and high unemployment, for lack of work. Faced with the reality of their situations, and with the support and encouragement of local trade unionists and visiting climate activists, 30 workers from the plant occupied the management and administration block of the factory at around 7.30pm on 20th July.

The initial police response was to deploy officers in riot gear, setting the tone of the campaign since, in collusion with private security employed by Vestas, to isolate the occupying workers. On the first day the occupiers were threatened with the enforcement of two hour deadlines to leave by private security 'storming' the building, repeated threats of arrest, and an angry senior manager, Paddy Weir, wielding bolt-cutters. Police and security backed off after footage of riot police was made public and meanwhile large crowds of Vestas workers, turned away by management, as well as locals, and trade union and climate activists, were gathering outside the gates. Police arrested 3 people for 'breach of the peace' for trying to join/get food to the protest, but a lunch time rush managed to successfully resupply the occupiers. In the following days security erected a metal fence around the factory in an attempt to cut off supplies to the occupiers. Undettered, the growing daily crowd hurled tennis balls full of treats and the company have since been forced to provide food (albeit and endless supply of crappy sandwiches) and water to the occupiers. Later, on 30th July workers, local supporters, and activists boldly broke through police and security lines using a diversion and managed to get some much needed supplies to the activists.

Things have since reached an impasse and the occupiers were granted a stay of execution by a local magistrate at a hearing on 29th July challenging their right to posession. The magistrate didn't buy Vestas' characterisation of the occupiers as violent fanatics (as well as several other aspects of their brief), and told them to return on the 3rd August with a better legal case to remove them. Far from being worn down by the actions of the company and the police, the resolve of the workers appear to be strengthening. Only two workers responded to threats to sack the occupiers, with the remainder vowing to remain in the factory until they are 'dragged out' by 'heavies'. Eleven of the occupiers have now been officially sacked by management (receiving the news on letters inserted into pizza boxes delivered by the company to the occupying workers), but still show no signs of backing down.

As well as the growing numbers gathering outside the factory, financial support and solidarity has been flooding in from around the world. Addressing the workers and their gathered supporters, the general secretary of the RMT Bob Crow, promised the workers legal aid and various (largely symbolic) shows of support, including demonstrations and fly-by banners and helicopter drops of supplies. On 20th July and 28th July climate activists and trade union activists gathered outside the Department for Energy and Climate Change in London. Less typical for the Isle of Wight, hundreds marched through Newport town centre on Thursday 23rd July and onto the factory. Further afield climate activists in Malmo, Sweden protested outside local Vestas offices. Solidarity actions are also now following Ed Milliband around the country on his tour to promote the governments strategy to green the UK economy, beginning with a racous welcome by members of Thames Valley Climate Action in Oxford on 27th July and solidarity picket in Birmingham on the 29th July. Further actions have been called for the weekend of the 31st July on the Isle of Wight.

In speeches and interviews since the occupation workers have found themselves at the centre of a perfect storm between growing concerns over inaction on climate change and multiplying consequences of the economic recession, making a mockery of the government in a week they announced further plans to create jobs by 'greening' the UK economy. After three days of saying nothing, and amid growing press and public awareness of the occupation, Ed Milliband (climate change minister) finally attempted to weasel the government out of any responsibility to the workers, blaming nimbys in the planning system for the supposed collapse of the turbine market in the UK. The Save Vestas campaign, as well as many commentators, cried foul, pointing out that a government prepared to fund multi-billion pound bailouts for greedy banks should be able to put up the money to save a wind turbine factory, especially given the governments ambitious plans to force through the planning system more than triple current wind capacity in the next five years. The government has since approved £6 million for a 'research centre' on the Vestas site, suppossedly creating 150 jobs, but have handed the money straight over to Vestas, who continue to give no guarantees on the future of the St.Cross factory.

Following the last-minute cancellation of the Big Green Gathering in Somerset, set to start on the 29th July, hunderds of green activists and festival-goers may have been diverted to the Isle of Wight by a huge social-networking campaign in support of the Vestas occupiers, dubbed Vestival. Ironically, BGG organisers claimed the festival was shut down for political reasons by Avon & Somerset Police, to prevent the Camp for Climate Action and other campaign groups from raising funds. Isle of Wight and Hampshire Police are now reported to be monitoring the three ferry crossings onto the island for hordes of angry festival-goers turned away by their colleagues.

The Vestas occupation is the latest in a series of successful militant industrial action this summer following occupations at the factories of Waterford Crystal in Kilbarry (Ireland) and Visteon in Enfield (London) and Belfast; successive wild-cat strikes at refineries and LNG terminals around the country; and walk-outs at the Linmar plant in Swansea over the persecution of Unite union activist Rob Williams.

Wind turbine maker Vestas has won a £6m grant from the UK goverment to help it build a research-and-development facility on the Isle of Wight.

The Department for Energy and Climate Change is awarding Vestas more than £3m as part of the Environmental Transformation Fund (ETF) scheme. This amount is being matched by the South East England Development Agency.

Vestas is the first company to receive a grant from the ETF scheme. The company submitted its bid earlier this year for a research-and-development facility to focus on developing wind energy products for the global market.

The centre will safeguard 100 jobs and create a further 150 jobs on the island in the short term and may offer jobs to some workers from Vestas's closing manufacturing plant.

Jim Brathwaite CBE, SEEDA chairman, said: 'We are very conscious of the difficulties faced by the current manufacturing plant and have been working hard to identify job opportunities for those facing redundancy at Vestas and have had a good degree of success: some 100 jobs look secure so far with many more job opportunities still being identified, albeit a proportion are likely to be off the island.'

After being on the roof for eleven nights, rooftop protesters will
descend from the vestas factory in East Cowes tomorrow morning
(Friday) at 11am. They will then take the protest to the local MP
Andrew Turner's constituency office in Newport.

They say: 'Despite the green rhetoric from the main political parties, the truth
of their attitute is apparent where green jobs are allowed to be lost
and local MP Andrew Turner actively opposes a wind farm on the Isle
of Wight. This tipifies the NIMBY attitute which is blocking
the progression of on-shore wind in the UK.'

'Andrew Turner's justification for the opposition to Wind power on the Island
includes a statement that having a windfarm on the Isle of wight would have no
effect on the vestas work force,(1) when in fact it is the cummulative effect of
decisions like these which efffects demand for wind power in the UK and has directly
let to the closure of vestas with the loss of over 600 jobs.'

Timings for photo and interview opportunities;

11am Protesters will abseil down from the side of the vestas building,
Columbine Road, Venture Quays, East Cowes, Isle of Wight
and, alongside vestas workers, will be available for media interviews.

1pm - We will be at Andrew Turner's constituency surgery requesting to talk to
him on camera, to discuss his objections to Wind power on the Isle Of Wight,
and his stance on NIMBYism
There will be a photo and interview opportunity at this time.
Address: 24 The Mall, Carisbrooke, P030 1BW
tel. 01983 530808

vestasrooftop@googlemail.com
Telephone on the roof: Martin: 07944744922

1) Based on Andrew Turners response to windfarm application: ref. TCP/27774,P/01400/06)
paragraph begining: 'I do not accept that a convincing...'
Copies of which will be available tomorow.