Message to the women of Iran

Your struggle against the misogynous regime of the Islamic Republic has gained great respect and admiration in the world. Your struggle has been followed by the world. 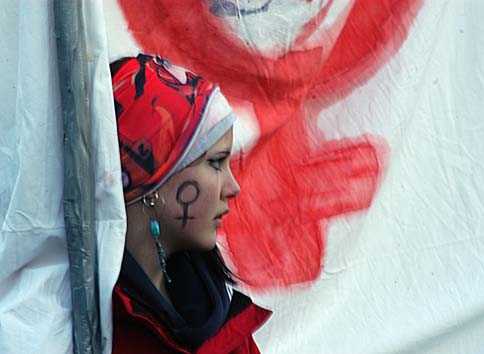 Your admirable bravery against the brutal islamic armies and your resistance against repression and violence demonstrates the profoundness of your desire for freedom. Now even the most ambivalent and unconscious "experts of the Iran" must take into account the reality that Iran is no islamic republic and that the people of Iran want freedom, equality and the end of the islamic regime.

Thirty years of resistance against one of the most brutal, murderous and misogyneous regimes, thirty years of war on the islamic soldiers against the islamic veil and for the most basic human rights, have made the women stronger. Thirty years ago, the brutes of the Hezbollah threw stones at the women shouting "veil or blow on the head", which led to the establishment of the regime. Today, women and girls throw stones on the brutes shouting "death to the dictator!". To the regime, a shiver runs down their spines, when they hear the women shout this slogan.

We salute the courage, the resilience and strength of the women of Iran. Your sacrifices in this tough as well as decisive period brings back hope for a humane future and a better world to the hearts of millions of people. The high price you pay for freedom and equality must guarantee a society free of any kind of discrimination and inequality. The liberation movement of women needs its own organization.

It needs an organisation that represents the ideas and claims of the movement. This requires an organization that does not compromise on the claims, and that demands nothing less than unconditional freedom and equality. The time has come to strengthen the Organization for the Liberation of the women of Iran.

The time has come to organize, to destroy gender apartheid and male chauvinism and to establish freedom and full equality for women. The whole freedom and equality are our claims and our right. We don't accept any compromise or revision downwards our claims under any pretext, be it national or religious.

Long live the Liberation of Women!

Azar Majedi, secretary of the Organisation for the Liberation of Women