Lets do it again: Prevent the Anti-Islam-Congress in Cologne

After the disastrous “Anti-Islam-Congress” last year, the party “pro Köln“(pro Cologne) tries one more time to organize a congress in the centre of cologne with many patriotic guests from whole Europe. This text includes information about the last year’s congress, the current program of “pro Köln”, the actions being prepared and practical details. 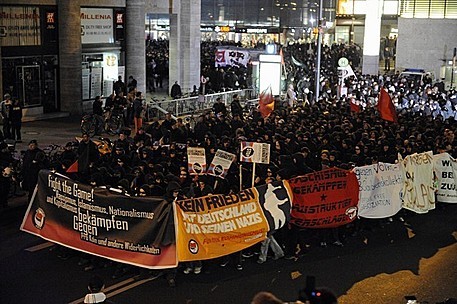 From the 19th to the 21st of September 2008, racists and neofascists from Austria (FPÖ), Belgium (Vlaams Belang), Italy (Lega Nord), the USA (Robert Taft Group), Great Britain (British National Party), Spain and Hungary planned to hold a so called „Anti-Islam-Congress“, invited by the self constituted citizens' initiative "pro Köln“ (pro Cologne), to spread their propaganda against people with other background or religion under the smokescreen of a pretended critique on Islam.

On Friday night, before the main day of the congress, 4000 people demonstrated under the motto: „Fight the game! Fight against racism, Islamism and nationalism!” The demonstration should communicate a criticism on racism, right-populism and Islamism. Therefore the development of right-populism should be discussed and put on in a context to European politics. Further the reactionary character of Islamism as a political and social movement was pointed out. The demonstration was the begining of a successful weekend for the antifascist movement.

Saturday, thousands of people were on the streets of Cologne to prevent the so called “Anti-Islam-Congress”. Different forms of action, like blockades and decentralized actions, “convinced” the police to end the congress because of “the high risk of security for the civilians and peaceful demonstrators of Cologne”. Therefore the right-wing-people were sent away and the congress was officially cancelled!

After the end of the blockades and while the people wanted to celebrate the police acted very brutally and arrested more than 400 persons. After this disastrous day “pro Köln” cancelled their press-conference that should take place on Sunday by claiming that Saturday as “the day, on which Cologne lost its democracy”.

At the weekend of 8th-10th of May, “Pro Köln” will reorganize a European Anti-Islam-Congress in the Centre of Cologne. Last year the congress was blocked successful by thousands of people. Again the announced participants of the congress seem like a horror-line-up. So it is supposed that many patriotic guests from Germany, like Harald Neubauer (editor of Nation and Europe) or the parliament member Henry Nitschke (ancient-CDU), as also from the European countries: Free party of Austria (FPÖ), the Belgian Vlaams Belang, Front National from France, Lega Nord from Italy as also the extreme right-wing from ancient -Yugoslavia, Hungary and more will appear in Cologne.

They plan to start Friday with rallies in suburbs of Cologne and a press-conference in the centre. The main congress will take place on Saturday morning on the “Barmer Platz” and from there a demonstration should start through the city centre to “Ehrenfeld”. You can find the detailed program below.


As last year the group Antifa AK Cologne will organise a demonstration to bring up our criticism on the streets. Under the motto: „Europe – Germany – Cologne. Everything shit!!” the demonstration should communicate a criticism on the construct of state,nation and capital. Therefore the development of the “good nationalism” from the state and civilians should be shown up and put in contrast with the “bad nationalism” produced by right-wing parties. The focus will be on the state-based nationalism and the faith in false freedom. The demonstration will take place in the centre of Cologne.

The Antifa AK calls out to fight state, nation and capital! For the social revolution!
==) Friday 8th May – 19:00 – Cologne – Main station (Köln- Hauptbahnhof)

Further information and the callout (german):

Friday, 8th May:
During the day: Actions against the rallies of “pro Köln”
Infos (in german) on Leverkusen-Wiesdorf:

Saturday, 9th May:
In the morning: Infiltration-Concept of trying to get in civil clothes to the congress-place and to prevent it from the inside. More Infos (in german) at

Further there will be Infopoints in the city where you can get actual Information on the congress and the eventual demonstration.

The preparation for the actions includes also the buildup of an appropriate infrastructure. For the communication an info-telephone and a wap-ticker will be set up. Legal-Team and paramedics will be present.

Sleeping Places will be available for Friday and Saturday night. Just send an email to

pennplatz@no-racism.mobi with a (not necessary real) name and the number of places you need or use the contact form at

http://september.web-republic.de/aik2/?page_id=44. All international people are therefore welcome to spend the whole weekend in Cologne.

Info-telephone: To be announced on