As part of the anti-NATO summit protests, several blockades were organised to stop, or hinder, access to the red zone - the part of Strasbourg that was completely closed off and where the summit took place.

These blockades were done under the "Block-NATO" umbrella ; one of those, the north blockade organized by "NATO-ZU", was strictly nonviolent. 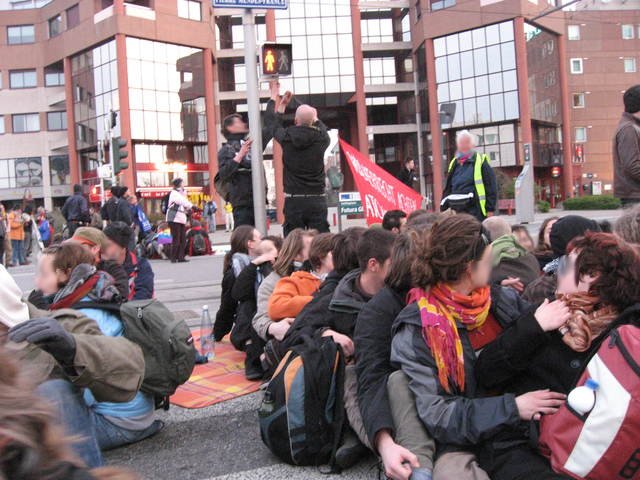 Blockaders are ready to resist being removed 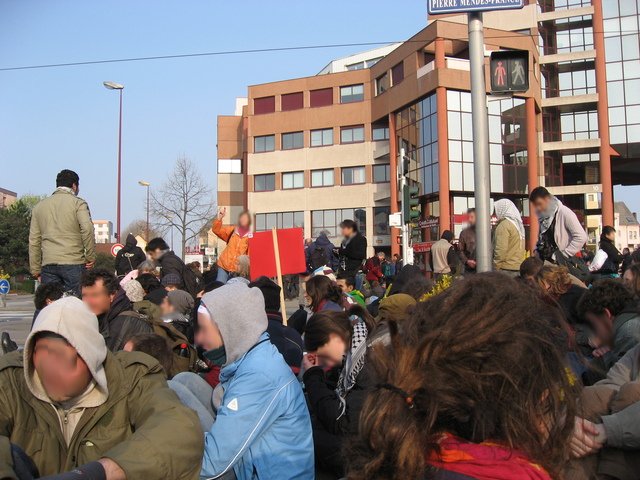 Blockaders chilling out after several hours 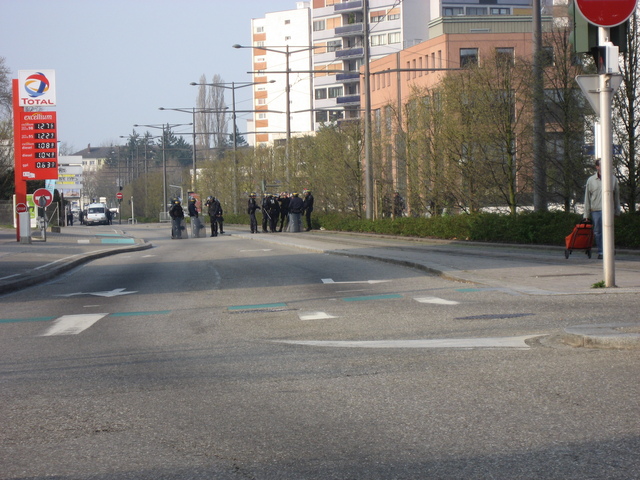 Police decides to keep their distance

NATO-ZU, which had it's own barrio and training facilities in the camp, was organised by consensus using a spokesperson council, where each affinity group would send a representative.

While anyone could join NATO-ZU at any point (as long as you agreed with the nonviolence guidelines), groups had to work within that structure. Information was only communicated to the group through that structure.

This organising structure seems to have made a difference - as all the other "Block Nato" groups who had advertised a public meeting point were attacked by the police at their meeting points, NATO-ZU got to their blockading point without any problems.

To ensure we would not be trapped in by the police, most of NATO-ZU left the camp on the Friday evening, to stay at other places in town or in campings. The blockading point and time had been agreed, and on Saturday morning many small groups converged at the same time on the blockading point. The point - a 4 lane road, one of north Strasbourg's main access route - was taken easily.

People sat down peacefully and waited. Soon after some riot police arrived, to evaluate the situation. They then decided to withdraw about 200 meters away from the blockade, and stayed there. The blockade lasted for five hours, at which point the blockaders decided by consensus that they had achieved their aim (the summit was now well under way, and there was no-one left to blockade), and could now leave to join the main demonstration.

The action was a success. We did not blockade all accesses to the summit - and with some effort the traffic could be re-routed around us - however it was clear from the start that this would be a symbolic action.

We organised in a democratic and efficient structure ; we planned our action as a group ; we carried out our action the way we had intented to ; and we left when we decided to. We did not bow in the fear of police reprisals, and where all ready to be arrested ; but equally we recognised it was a symbolic action and did not take any undue risks to our persons. Finally we provided an alternative form or resistance to that of the violence of some elements of the black block, whose actions were, in the end, no less symbolic than ours.