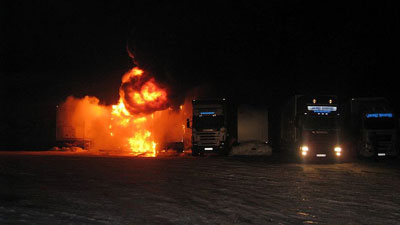 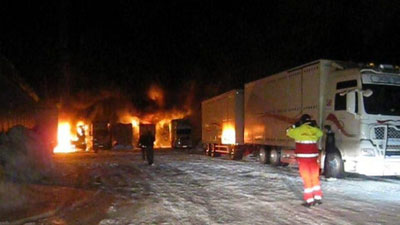 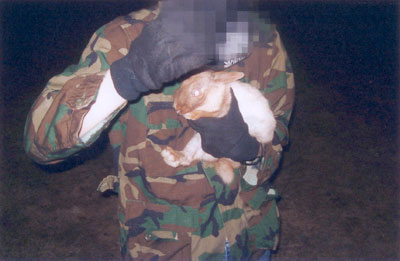 "On the night of March 6th into the morning of March 7th, 2009 an ALF cell carried out an attack against a rabbit breeder in Hematite, Missouri. We freed one Female Rabbit as our actions were interrupted by the family dog. We would like to thank the target for making it so easy to liberate these cute, wonderful, innocent animals. We didn't even need to use our bolt cutters to open the cages. We did free their only female rabbit though we know it may not have stopped their slave trade, it serves as a warning that we WILL be back for the rest. We will not stand by and watch as you rape innocent animals for your profit.

Included in the pictures is two of the rabbit, one of its first steps to freedom, and the wonderful sunrise a few hours afterwards.

Also that night we tore down a dairy farm fence to cause economic and labor pains for the slave owner of the farm. We also took a trip to Potosi, Missouri to investigate a suspicious establishment which we received word of animal research being practiced. We did not find anything due to high security but trust us... We will be back.

No animal will go unnoticed.

"In the province of Zeeland is the quiet village Stavenisse. It looks like a peaceful town but just on the outside of Stavenisse is a mink farm called Walhout BV. This family company earns money by breeding about 30,000 mink a year and gassing them after 7 months for their fur.

The mink spend their entire lives on the farm in small wire cages. Hundreds sit in cramped sheds awaiting their death. The sheds are not much more than a roof, because the colder the mink are the thicker their fur is and that means more money for the breeder.

Last November, about 80% of the mink were gassed and skinned. The mink who were 'lucky' enough to live are used to create a new stock of mink. A mink has between 1 and 10 young per litter.

The DBF wants an end to this exploitation of animals and especially for an unnecessary luxury product like fur. We won't wait for a ban on mink farming because in The Hague they have debated for 10 years too long already. Not words but deeds; this is why we have taken it into our own hands.

During the night of Saturday 14th to Sunday, March 15th we went to Walhout BV. From previous visits to this filthy business, we knew exactly what we could and could not do about the (otherwise extremely useless) security. Once we were on the grounds we first destroyed all the breeding cards in 20 sheds and painted in big letters 'DBF is everywhere'. We found a ladder which was very useful for us to escape again over the fence. There was also an excavator which we took the keys from and cut all the cables. There were multiple nets to catch mink around the area which we also destroyed. Then it was time for the real job: Liberating the mink! We freed all the animals that we could and took 5 mink with us to be released somewhere else in a natural area. Before we left we cut holes in the fence to help the mink escape.

This will be a significant blow to the company for a mink is worth at least €90. The Rasmussen mink farm in Oude Molen was lucky this time, as the DBF left you alone. Let this be a warning; stop the breeding and murder of innocent animals! As long as the animals suffer we will not rest; you can make that ditch that you are making as wide as you want but it will never stop us!

*Media reported that approximately 2,500 were released from cages.

"On the first night of the weekend that just past, in the filthy city of
Santiago, we encountered 2 large butchers to which we wanted to
give our contribution and make the work of these murderers more difficult;
we decided to do something easy and which would take us very little time.
Taking whatever materials with which we could plug the locks on the
padlocks, we approached our target. The first butcher had 4
padlocks on the front door which were used to open all the metal shutters
from the inside (that were like 3 shutters); after plugging the locks well
we adorned the walls of the premises writing 'meat is death'
and 'murderers'. The second butcher was larger, this had a
front door (with a lock and 2 padlocks) where the murderers
enter and 5 metal shutters (7 padlocks in total); after plugging
all the padlocks and the door lock we painted on the door of the building
'murderers' and 'FLA'.

On the 2nd night of the weekend and with a little superglue in
our pockets, we went to another butcher; this one had two
metal shutters and a total of 8 padlocks which we plugged with pieces
of metal and superglue; we also graffitied on the walls
'murderers' and '(A)'. The following day the meat market did not open their
shutters ...

Plugging locks, breaking windows, leaving a message, etc. is very
simple, but that does not make it less important... we know that
actions like these are carried out and it is not the first time that we have done it,
but this is the first time that we claimed it through a communique,
because we realized we were making a mistake in not doing so.

It is important to claim an action ...

We do not believe in a hierarchy of actions, like believing that the action
that produces the most damage is the most important or that releasing an animal is nothing in comparison to the liberation of thousands of animals. What is important is to smash the fear and to dare to carry out sabotage against the oppressors, because they will not stop exploiting through the power of 'convincing' and the form of pacifism that some believe in.

A small review of what is happening with our friends in Mexico is enough, where in the beginning communiques were read describing graffiti and breaking windows and now the burning of machinery, attacks against the police and the liberation of animals. More people will see that direct action is a practical and effective method in the fight against exploitation.

Words are worth little if they are not coupled with action.
Propaganda by deed is necessary. Our fight against power will only end
with its destruction.

We send a friendly greeting to all those who fight against exploitation,
whatever type without exclusion and without giving more significance to anyone.

For the destruction of what oppresses us, war against exploitation!

During the night of March 1st, five chicken-transport trucks were set on fire outside "Norsk Kylling," a chicken slaughterhouse and processing plant in Støren. Unfortunately, many other trucks were removed from the area during the fire, or else the damage would have been larger.

Norsk Kylling has been in the media spotlight numerous times for serious breaches of animal welfare laws.

The police and the owner of the trucks believe it's arson, but no one has claimed responsibility for the action yet.

In September 2007 three trucks were destroyed by fire at the same place. No one claimed responsibility for that arson either.