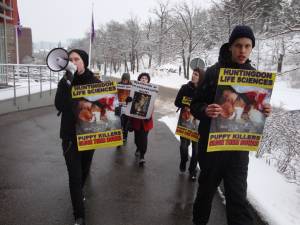 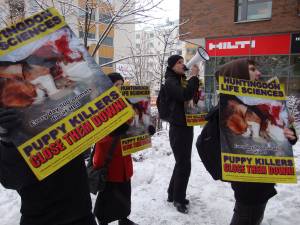 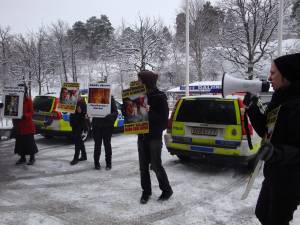 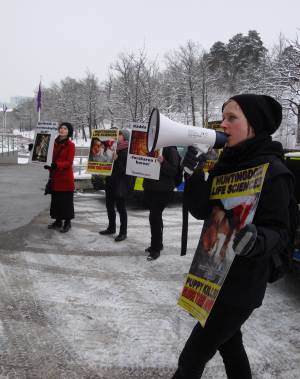 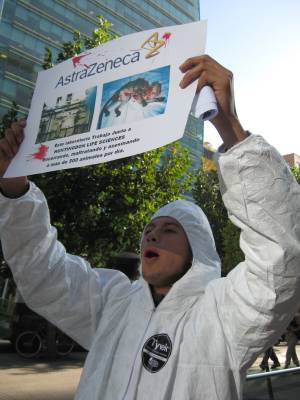 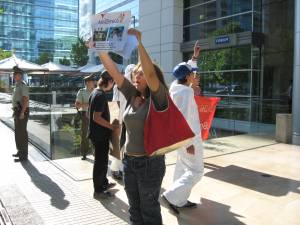 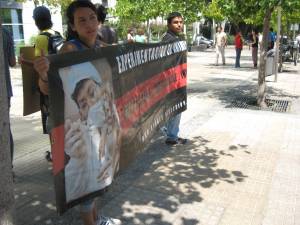 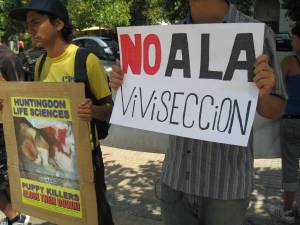 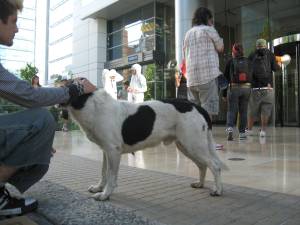 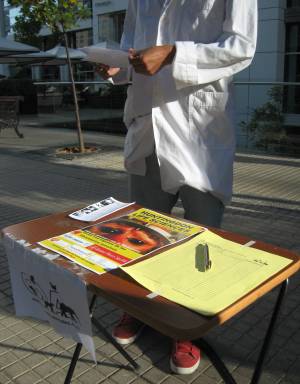 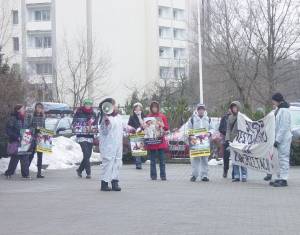 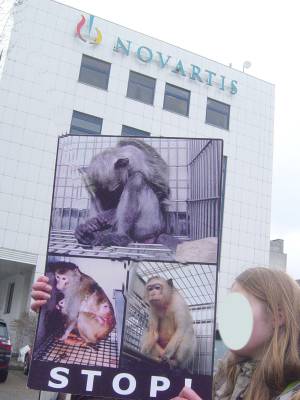 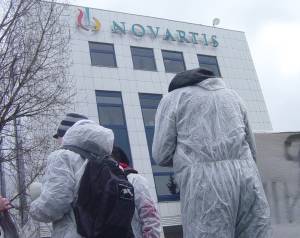 Demos in Stockholm against Novartis, Glaxo and Wyeth

During the day activists in Stockholm, Sweden, paid a visit to three of Huntingdon Life Sciences biggest customers - Novartis, Glaxo SmithKline and Wyeth.

Noisy demonstrations were held outside their offices to remind them that anyone doing business with a company that allows animal abuse to go on will be campaigned against. We do not tolerate beagle puppies being slapped in their face, we do not tolerate animals being force fed toxic substances, we do not tolerate rats and mice being tortured.

We won´t be stopped. Total abolition of vivisection, stop all cruelty now!

The second day of action in Santiago took place in front of the office of AstraZeneca, another customer of HLS and involved in the experiments exposed by the recent undercover investigation. Activists from Juvan, Concepción, protested also and an activist from San Antonio, another city, traveled here to participate in the demonstration.

Again we arrived early in the morning to demonstrate, and lots of people got near us to see what was happening and all of them were informed of the filthy trade AstraZeneca has with HLS. This place was surrounded by office buildings, so thousands of people work there and yesterday learnt that they have a cruel profiteer as a neighbor.

Like yesterday, we had an information stall by the demonstration where people could stop and talk about the campaign and vivisection. Even a person who was just walking there joined the protest after finding out what it was about.

This protest is dedicated to and the animals that are tortured and killed by HLS and to all SHAC prisoners, imprisoned just for their compassion.

Until all cages are open!

Campaigners were back at Barclays Market Hill Cambridge branch informing customers and members of the public about the company’s investment in HLS, the most exposed animal testing lab in the world who have been caught out time and time again for animal cruelty. HLS test sweetener, household products and GMOs on animals in abusive and deadly experiments.

A police officer and 2 PCSOs came up to a campaigner and tried to get him to move from near the doors. Despite calling him ‘arrogant and ignorant’ for not moving (leading to a member of the public showing support and telling the campaigner he didn’t have to stand for it), the police admitted no offence had been committed. They also revealed that they hadn’t even got a complaint when the PCSOs first came up and started to waste time they should be using to catch criminals! The police left sulking after not getting their own way!

We have the right to freedom of protest allegedly in this country and we will not be deterred from naming and shaming companies that support and collaborate with the most exposed animal contract testing lab in the world.

We organised a SHAC demonstration against Novartis in Warsaw, Poland today. Where 15 activists chanted outside their building and gave out information about HLS's and Novartis' cruel track record.

Two activists went into the building to talk about the cruel experiments with some workers of Novartis and gave them information about all of HLS' exposes over the past decade.

We continued to make some noise, gave out leaflets and informed as many people as possible about the cruelty of Novartis and HLS. This demo was in solidarity with the SHAC City Shakedown march that happened in London today.

We're planning to come back to Novartis premises until their stop paying for animal experiments.