The flagship of the Sea Shepherd Conservation Society, the M/Y Steve Irwin, is heading back from the Antarctic Whale Sanctuary where it has been on patrol to enforce international conservation regulations in protection of the area's great whales. Since its departure from Brisbane, Australia on December 4th, the ship and its crew have been involved in various confrontations with a Japanese Whaling Fleet, which continues to operate a commercial whale hunt in the area illegally.

On December 26th, the Steve Irwin confronted the Japanese vessel Kaiko Maru. The ships collided and Sea Shepherd crew deployed butyric acid on its decks. From 1st February the whaling operation was shut down for 8 days straight with both sides of the conflict accusing each other of dangerous manoeuvres and tactics. On February 6th, the Steve Irwin collided with a harpoon ship twice, when it tried to block the ship from offloading a dead whale onto the factory ship Nisshin Maru. As part of an international crew of volunteers, 3 activists from the UK worked onboard the Sea Shepherd vessel during the campaign which was dubbed operation Musashi. 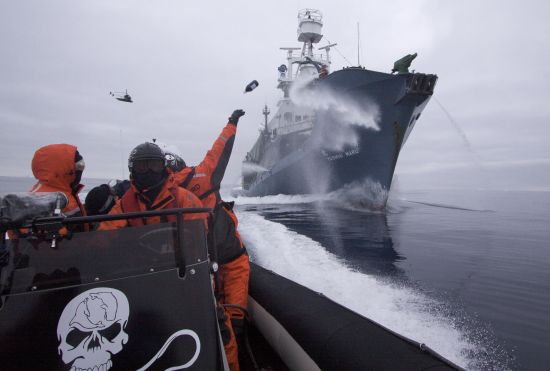 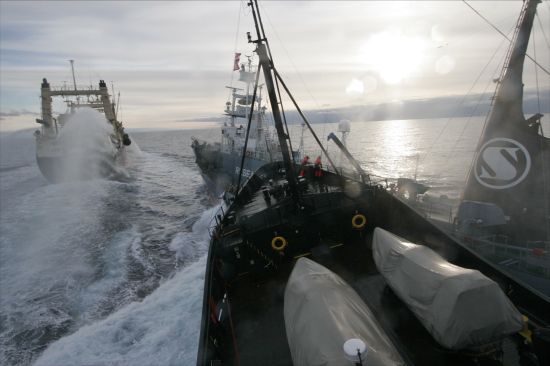 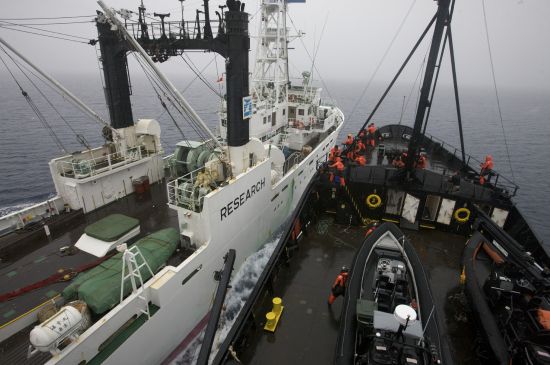 On December 19th, only 9 days after the Steve Irwin had left Hobart, Tasmania it was able to locate one of the ships of the Japanese Whaling Fleet. The Yushin Maru No.2, one of the Japanese harpoon ships, suffered ice damage to its propeller while being pursued by the Steve Irwin that day. In dense fog the harpoon ship was forced to flee into icy waters. The incident and the damage which resulted from it took the harpoon vessel out of operation between December 20th and February 5th, for a total of 46 days.

On December 26th, the Steve Irwin confronted the Japanese spotter vessel Kaiko Maru. The ships collided and Sea Shepherd crew deployed butyric acid on its decks. During manoeuvres by both ships a collision occurred causing minor damage to both ships, and no injuries, in Antarctic waters within the Australian Economic Exclusion Zone and Southern Ocean Whale Sanctuary, north of the Mawson Peninsula. Australian citizen Jeff Hansen from Perth, Western Australia, delivered a message over the radio in Japanese calling on the Japanese whaling ship to cease whaling operations and leave Australian territorial waters.

The Kaiko Maru had been undertaking a detour in the ice pack area after completing the day’s research activities, according to the Institute Of Cetacean Research (ICA). The Steve Irwin pursued and came alongside the Kaiko Maru for anti-whaling activists to throw 10 bottles of butyric acid (rotten butter) and 15 bottles of a methyl cellulose and indelible dye mixture.

Methyl cellulose makes the decks of the whaling ships unbearably slippery, as the whalers now know after a few of these confrontations, while butyric acid produces a very bad smell making work intolerable. Both substances are biodegradable and cause no harm when it comes in contact with a person. The main target is the large deck of the Nisshin Maru, the factory ship which processes the whale meat. Once the substances have been thrown on deck, they can’t use it for a while as it would contaminate the whale meat, delaying any killing of whales.

From 1st February the whaling operation was shut down for 8 days straight as Sea Shepherd persued the factory ship Nisshin Maru. On February 4th, Sea Shepherd reported that the three harpoon vessels of the fleet attacked the Steve Irwin. All three harpoon ships moved in to flank the Steve Irwin as the Sea Shepherd ship continued to chase the factory ship Nisshin Maru. "The Yushin Maru #2 initiated the attack by cutting dangerously close across the bow of the Steve Irwin from port to starboard in seas that were far from calm. The other two harpoon vessels Yushin Maru #1 and Yushin Maru #3 made the same dangerous maneuvers." stated a press release by Sea Shepherd. "It has given us some very dramatic footage for the next season of Whale Wars," said Captain Paul Watson.

"If their intention was to intimidate us, it did not work. When it comes to playing chicken on the high seas, we have much more experience than the whalers."

On February 6th, the Steve Irwin collided with a harpoon ship twice, when they tried to block it from offloading a dead whale onto the factory ship Nisshin Maru. No injuries occurred during the collision. The Japanese Whaling fleet decided to stop running from Sea Shepherd and recommenced whale slaughtering which has provoked confrontations between the whalers and Sea Shepherd activists.

According to Captain Paul Watson: "We told them to not continue their illegal whaling operations and that we would be blocking the stern slipway of the factory ship. They decided to test our resolve and apparently expected us to retreat when they charged in ahead of us to make the transfer."

With the Japanese Whaling Fleet using three harpoon boats, Sea Shepherd does not have the resources to prevent the harpooning of whales. Once harpooned, the whales need to be transferred to the rear slipway of the factory ship, the Nisshin Maru. Sea Shepherd have endeavoured to block the transferring of dead whales by placing their boat, the Steve Irwin, right behind the Nisshin Maru. Both collisions ocurred in this situation with the Japanese attempting to force Sea Shepherd from blocking access to the Nisshin Maru slipway, while pounding the activists with hire pressure water jets, Longe Range acoustic Devices (LRD) which can daze or confuse people within its range, and metal objects.

Sea Shepherd says they pursued the Japanese whaling fleet for over 2000 miles between December 18th and January 7th disrupting their whaling operations for 19 days. "The Steve Irwin returned and relocated the whaling fleet shutting down operations of the fleet for an additional 8 days. We can claim 27 days that we physically prevented the whalers from killing whales.

"Many less whales have been killed and more whaling profits lost. The whaling fleet will not meet its quota for the fourth year in a row."

The Sea Shepherd Conservation Society was founded in 1977 by Paul Watson who is one of the three founding members of Greenpeace. Watson had come to feel that the tactics employed by that organisation were inadequate. While Greenpeace have a policy of avoiding harm to whaling vessels, Sea Shepherd have a deliberate policy of sinking or sabotaging vessels engaged in illegal whaling.

This confrontational approach has been controversial. Greenpeace refuse to work with them and the FBI dub them 'eco-terrorists'. Nevertheless, their uncompromising position has found them many supporters, including several high-profile figures. In 2007 the MV Robert Hunter (named after Canadian Robert Hunter, co-founder of the Greenpeace Foundation) was renamed Steve Irwin after the TV naturalist. Irwin had considered joining the vessel on an upcoming voyage to Antarctica shortly before his untimely death, and the decision to rename the vessel was endorsed by his widow Terri Irwin.

Although it is most famous for its work defending whales, Sea Shepherd's remit is much broader, incorporating campaigns against poaching, longline fishing, shark finning, seal hunting, unlawful habitat destruction and climate change. Their confrontation with shark poachers in Guatemala is a key element of the film Sharkwater, recently released in cinemas in the UK.