Bayer Day of Action in NYC 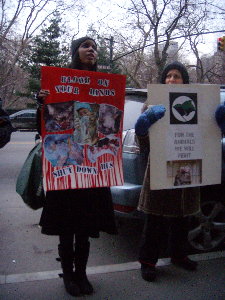 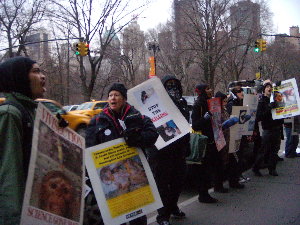 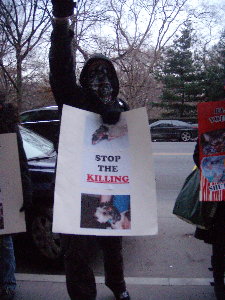 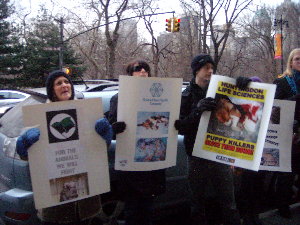 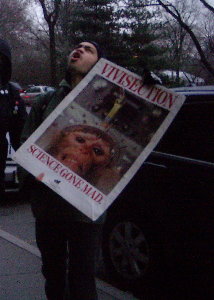 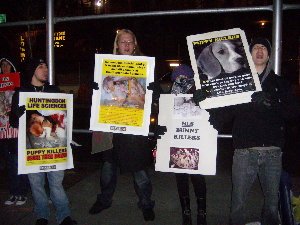 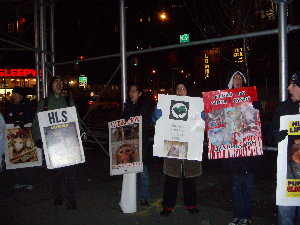 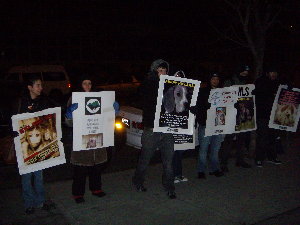 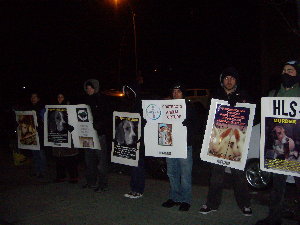 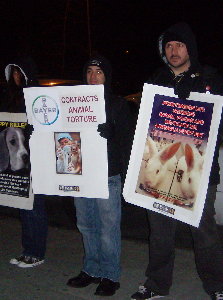 First stop of the evening was the exclusive luxury hi-rise building of Lamberto Andreotti, who sits on the Executive Management team of Bristol-Myers Squibb. Lucky for the activists, the Ethical Society, whose meeting space is directly across the street from Andreotti’s apartment, had a concert scheduled. This ensured a steady stream of pedestrians, many of whom stopped to discuss the lack of ethics and compassion being shown by Bristol-Myers Squibb by continuing their relationship with the animal abusers at HLS.

Fifteen activists raised their voices in unison to advocate for the animals, imprisoned by Huntingdon Life Sciences, who have no voice. Graphic posters enlightened passersby to the suffering and pain caused by animal testing. Literature was freely distributed and concert-goers stopped by to take handfuls of flyers to distribute at the concert. It is always a pleasure for activists to converse with intelligent and educated people, who care about ethical issues and compassion.

Many expressed their support for animal rights and against animal testing. Most were disheartened to know that a well-known company like Bristol-Myers Squibb was complicit in the bloody business of Huntingdon Life Sciences.

After a short walk north, activists arrived at location that is very familiar to them. At the bustling intersection of 72nd Street and Broadway, activists raised their signs and their voices to name and shame Dorothy Watson of HLS customer Novartis. The erection of scaffolding along 72nd street served to amplify their already loud voices. This has to be one of the busiest intersections in New York City!

As always, hundreds of flyers were distributed and many stopped to engage in conversation with the activists. Many promised to call or write to Novartis and to Dorothy Watson in an effort to get them to cut the ties that bind them to the despicable animal abusers at Huntingdon Life Sciences. The bone chilling cold did nothing to dampen the spirits of the activists. Despite freezing fingers and toes, they held up their signs and gave voice to their anger and rage naming and shaming one of the coldest and most dispassionate partners of Huntingdon Life Sciences, Novartis.

Despite the numbing cold and frigid winds, activists traveled by both train and bus up to 135th Street and 5th Avenue in the well-known neighborhood of Harlem. There, activists set up in front of the building of Dr. Sybil Anderson of Bayer Corporation. This protest was part of the Global Day of Action against Bayer.

One activist held a sign prominently featuring a Bayer logo along with the words “Contracts Animal Torture”. This was a very different kind of location for the activists, who were gratified to find, that the hatred of animal cruelty is universal and people from all races and walks of life are equally disgusted by it. Many of Sybil Anderson’s neighbors stopped to take flyers and to ask questions of the freezing activists. Not one person spoke out against the protesters or argued against their right to be there and to loudly call attention to their cause.

Chanting…..”One Struggle, One Fight….Human Freedom, Animal Rights”, activists spoke the truth and were well received……”You can put our friends in jail, we will drive the final nail” was met with encouragement and nods of support from passersby.