Liverpool anti-ID picket: No One Is Illegal

20 students and No Borders/anti-ID campaigners from Manchester made their way to Liverpool on 25th November, the day that the government introduced ID cards for non-EU nationals living in the UK. There they joined a group of 30 Merseyside activists outside Reliance House to protest at the introduction of compulsory ID cards for international students and non-EU spouses on that day. 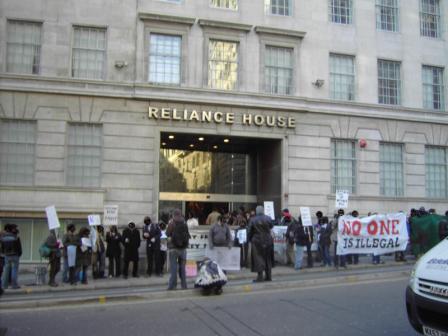 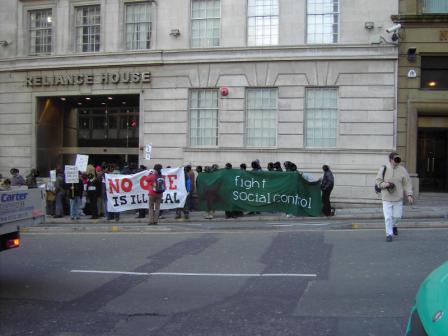 Reliance House is where interviewing, photographing and fingerprinting will take place from 4th December before being issued with a biometric ID card. It is also Liverpool’s reporting centre where those seeking asylum have to ‘sign in’ on a regular basis while their claims are being processed. If their claims fail they can be held, without prior notice, in the immigration detention facility in the same building for up to 7 days.

It is thus imperative to make the connection between ID cards and the assault on the rights of non-EU nationals wanting to live, work and study in the UK. People from Manchester No Borders had brought along placards and banners proclaiming that “no one is illegal”. Where the state reinforces the division between legal and ‘illegal’ people our solidarity must extend to those most affected by the scheme.

Some mention in the news:


No Borders! No Nations!
No One is Illegal

(During the picket of Reliance House, some first contact was made with individual No Border activists from Liverpool, Merseyside and North Wales. If you are from this region and want to get active in a No Borders group, please email us, so we can get you in touch)