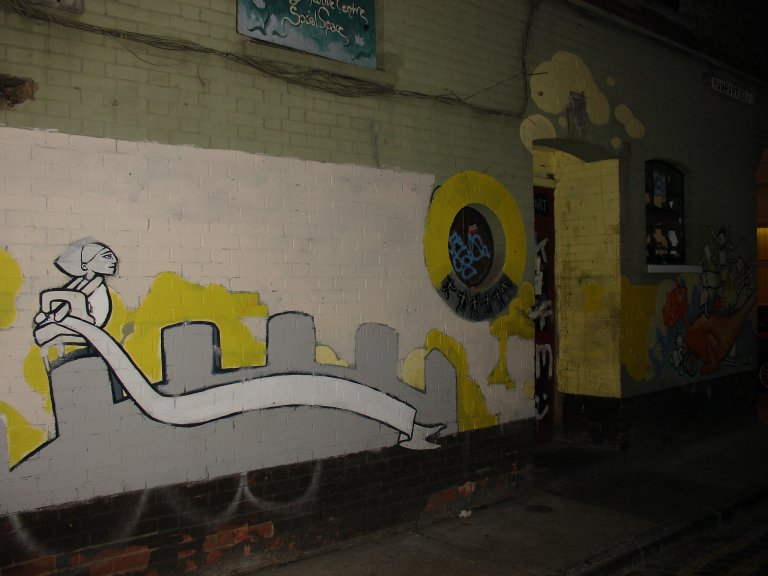 This year was the same venue as last year, Queen Mary College, a bit of a trek but an improvement on last year with an extra large room for stalls, and so not so crowded.

I'm beginning to wonder why I go. You find books you do not find elsewhere, but I have all worth having.

One of the few stalls worth visiting is Indymedia for the DVDs they have on offer. I came away with half a dozen. Last year I got We – the unauthorised Arundhati Roy and Manufactured Landscapes, both I'd highly recommend.

To coincide with the book fair, Indymedia London was launched. The Indymedia stall had flyers for the new site, but the flyer omitted to include the web address!

Other stalls worth visiting are Corporate Watch and Rising Tide. I regret that I did not go back to pick up their publications.

Missing were Undercurrents and SchNEWS. A pity as I would have liked to have picked up a copy of On the Verge from SchNEWS.

Even Notes From the Borderlands were not there, peddling their fantasies. Always good for a laugh.

In addition to the stalls there were also talks. I would have like to have attended the one given by John Pilger, but did not learn of it until later.

I would have liked to have seen Mark Thomas there as he has just published a book, Belching Out the Devil, an account of Coca-Cola, but he had other engagements for the day. Luckily for myself, I saw him two days before at the Guildford Book Festival. If he is promoting the book near you, go along. Also buy the book.

There needs to be a wider diversity of groups with stalls. Each year it gets narrower and narrower. Suggestions which others can add to: Colombia Solidarity, Bolivian Solidarity, Palestinian Solidarity, Kurdish groups, War on Want, World Development Movement. Many, if not all, of these groups have been there in the past. Why do they no longer come? Anarchist Bookfair is the lesser occasion without this wider diversity.

Afterwards there was a couple of parties. One was apparently at a bookshop on the way to the other party at Ramparts.

The Ramparts party went on until the early hours, but I did not stay. I grabbed some food, heard the opening group, punk with attitude, white noise and enthusiasm which barely made up for lack of talent (I've seen better on the streets of Brighton), then headed home.

I thought that Ramparts was no more, that an eviction had taken place. I was therefore surprised, that as last year, there was a party at Ramparts. Ramparts has been re-occupied and with the collapse of the property market, it could be occupied for some time.

There and back the usual third world transport. At my local station, a long queue at the ticket office, only one person selling tickets, two goons manning the ticket barrier, one of whom refused to open the gate to let me through. They need the goons in case someone tries to dodge the fare. Ironic when they rob us blind with their fares, fares which go up faster than inflation every New Year, whereas the quality of service goes down. The train was overcrowded, only five coaches for a busy mainline service.

I guess I should be relieved that being weekend, there was not the dreaded rail works, though I did notice several tube stations and lines were closed, fortunately not on my route.

On the way, I looked in the recently opened Crypt of St Martin-in-the Fields.

A thought for the future which I discussed with a few people who thought it a good idea. Know a good book? Leave a copy which you have registered on BookCrossing for others to pick up. Maybe an area or table set aside for the purpose.