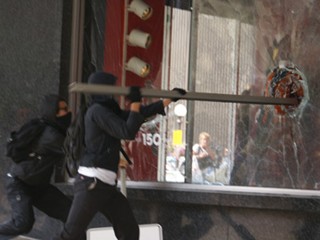 Other up-to-the-minute newsfeed from the legal team on the ground:

As of 10:30pm Tuesday, the arrest tally from Ramsey County Sheriff’s Office was: 284 total; 130 felonies; 51 gross misdemeanors; 103 misdemeanors. The jail is seemingly severely backed up and not everyone has been booked or processed, so these numbers clearly don’t represent the total arrestee count for the day. These numbers also do not necessarily include the numbers of arrestees whose identifications have not been verified.

In regards to the arrestees from this weekend’s raids, five of them are still being held at Ramsey County Jail on probable cause, which means that they might not be able to see a judge until Tuesday or Wednesday. One of the arrestees was released yesterday evening.

Though some people have been cited and released, the majority are still being held in jail. We’ve gotten many reports that people are not getting proper medical attention, are being refused their medication, and/or have been separated from the rest of the group.

Also, there are also many felony charges, which allow the state to hold the protesters for a longer period of time. Felony charges have historically been used as scare tactics against activists, and there is much less precedent for them to hold up in court. More often, these bogus charges are simply used to keep protesters off the streets and as a way to oppress and silence people.

Please show your support and solidarity by calling the jail at 651.266.9350 and demand that people are given proper medical attention, are given access to their medication, and are not separated from the larger group! Also, demand that arrestees’ charges are dropped and that they are released immediately! You can also call the Ramsey County Sheriff’s office at 651.487.5149 or the St. Paul Mayor’s office at 651.266.8510, as well your city council member, state representatives, etc.

* Try to get messages from the outside world to your arrested friends. This is a HUGE morale booster; and
* Flood the jail with phone calls, especially if folks have needs that aren’t being met. Call the mayor, the police chief, and other representatives of the state, or write a letter to the editor denouncing police harassment, misconduct, unlawful arrests, and/or the attempt to oppress and silence people. You may also want to organize other actions such as staging protests or rallies outside of the jail.