Recently, there has been much discussion about Barack Obama having possibly
attended the recent Bilderberg conference in Virginia. This speculation arose
when Barack Obama and Hillary Clinton sneaked off for a secretive meeting
while in Virginia. As the AP reported, "Reporters traveling with Obama sensed
something might be happening between the pair when they arrived at Dulles
International Airport after an event in Northern Virginia and Obama was not
aboard the airplane. Asked at the time about the Illinois senator's
whereabouts, [Obama spokesman Robert] Gibbs smiled and declined to comment." 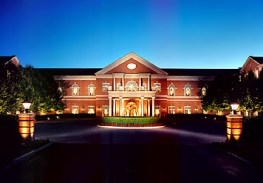 First Meeting of the Bilderberg in 1954

A Background to Bilderberg

Bilderberg, which has been meeting annually since 1954, is a highly secretive
international think tank and some say, policy-forming group made up of
representatives from North America and Western Europe and was founded by
Joseph Retinger, Prince Bernhard of the Netherlands and Belgian Prime Minister
Paul Van Zeeland. The Bilderberg Steering Committee, made up of around 30
people, (with no official list available), "decided that it would invite 100
of the most powerful people in Europe and North America every year to meet
behind closed doors at a different five-star resort. The group stresses
secrecy: What's said at a Bilderberg conference stays at a Bilderberg
conference."2

Usually, the Bilderberg Conference is held in Europe for three years in a row,
with the fourth year holding a meeting in North America. However, the previous
North American conference was held in 2006 in Ottawa. So why did they break
tradition to hold the conference in North America this year? Speculation
abounds around a discussion of a possible attack on Iran, the
American-centered global financial crisis, as well as the current US
Presidential elections.

Bilderberg has long been an important forum for up-and-coming politicians of
Western nations to be introduced to the global financial elite; the heads of
the major multinational corporations, international banks, world financial
institutions, global governing bodies, think tanks, and powerful individuals
of the likes of David Rockefeller and various European monarchs, including
Queen Beatrix of the Netherlands, daughter of founding member, Prince
Bernhard, as well as Queen Sofia and King Juan Carlos of Spain.

Interestingly, as the Washington Post reported, Vernon E. Jordon, a
high-powered American executive, who sits on several corporate boards,
including American Express, Xerox, J.C. Penney, Dow Jones, and Sara Lee, to
name a few, also happens to be a very close friend of former President Bill
Clinton. However, "it was Jordan who first introduced then-Gov. Clinton to
world leaders at their annual Bilderberg gathering in Germany in 1991. Plenty
of governors try to make that scene; only Clinton got taken seriously at that
meeting, because Vernon Jordan said he was okay."6 Clinton subsequently became
President.

Recently, there has been much discussion about Barack Obama having possibly
attended the recent Bilderberg conference in Virginia. This speculation arose
when Barack Obama and Hillary Clinton sneaked off for a secretive meeting
while in Virginia. As the AP reported, "Reporters traveling with Obama sensed
something might be happening between the pair when they arrived at Dulles
International Airport after an event in Northern Virginia and Obama was not
aboard the airplane. Asked at the time about the Illinois senator's
whereabouts, [Obama spokesman Robert] Gibbs smiled and declined to comment."7

The press that had been traveling with Obama were not made aware of the
secretive meeting until the plane that they assumed Obama would be present on
was moving down the runway, prompting many angry questions from the press
towards Obama's spokesman, Robert Gibbs. One reported asked Gibbs, "Why were we not told about this meeting until we were on the plane, the doors were
shut and the plane was about to taxi to take off?" to which he responded,
"Senator Obama had a desire to do some meetings, others had a desire to meet with him tonight in a private way and that is what we are doing." This preceded another question, "Is there more than one meeting, is there more than one person with whom he is meeting?" Gibbs simply replied, "I am not going to get into all the
details of the meeting." He again later repeated that, "There was a desire to do some meetings tonight, he was interested in doing them, others were interested in doing them, and to do them in a way that was private."8

As the Financial Times reported in May of this year, Barack Obama appointed
James A. Johnson, the former CEO of Fannie Mae, "to head a secret committee to
produce a shortlist for his vice-presidential running mate." A short list was
discussed by the article, which listed, other than Hillary Clinton, "Jim Webb,
the former secretary of the navy, Vietnam veteran and senator for Virginia;
Tim Kaine, the governor of Virginia; John Edwards, the former
vice-presidential candidate in 2004; Ted Strickland, the governor of Ohio; and
Kathleen Sebelius, the governor of Kansas." Other potential nominees include
"Sam Nunn, the former chairman of the Senate armed services committee; and
Wesley Clark, the former head of Nato in Europe."10

James A. Johnson, the man Obama asked to pick his running mate, played the
same role for John Kerry back in 2004, and he selected John Edwards. As the
New York Times reported, "Several people pointed to the secretive and
exclusive Bilderberg conference of some 120 people that this year drew the
likes of Henry A. Kissinger, Melinda Gates and Richard A. Perle to Stresa,
Italy, in early June, as helping [Edwards] win Mr. Kerry's heart. Mr. Edwards
spoke so well in a debate on American politics with the Republican Ralph Reed
that participants broke Bilderberg rules to clap before the end of the
session." The Times further reported, "His performance at Bilderberg was
important,'' said a friend of Mr. Kerry who was there. ''He reported back
directly to Kerry. There were other reports on his performance. Whether they
reported directly or indirectly, I have no doubt the word got back to Mr.
Kerry about how well he did."11

James A. Johnson, Vice Chairman of Perseus, a merchant banking firm, is also a
director of Goldman Sachs, Forestar Real Estate Group, Inc., KB Home, Target
Corporation and UnitedHealth Group Inc., is also a member of the American
Friends of Bilderberg, the Council on Foreign Relations, the Trilateral
Commission and is an honorary trustee of the Brookings Institution.12 It is
likely that Obama's running mate will be chosen by Johnson at this years
Bilderberg Conference.

Notable among this year's Bilderberg guests are Kansas Governor, Kathleen
Sebelius, who the Financial Times reported was on Johnson's short list of
nominees. In fact, Sebelius is the only person mentioned as a possible running
mate in the Financial Times article that was officially listed on the
Bilderberg list of attendees.13 Could this be a sign that she may be the
chosen one? Time will tell. However, another Democratic politician present at
the meeting was Tom Daschle, so perhaps he is working his way back into
politics.

Just because Obama's popularity dwarfs that of McCain's, is not reason enough
to ignore the other candidate. After all, the elite never ignore both
candidates, and in fact, ensure they have them both neatly packed in their
back pockets. Among the guests at the Bilderberg meeting this year, included
Republican Governor of South Carolina, Mark Sanford, as well as Secretary of
State Condoleezza Rice,14 which would be a smart political pick for McCain,
going up against the first black presidential candidate.

McCain has also received endorsements from former Secretaries of State, Henry
Kissinger, General Alexander Haig, Lawrence Eagleburger and George P.
Shultz.15 These are not men without influence, as Henry Kissinger and George
Shultz were also present at this years meeting.16 Also interesting to note is
that George P. Shultz "associated himself with the Bush presidency early on,
introducing the Texas governor to Condoleezza Rice at the Hoover Institution
in 1998." Could Condi be in the process of being groomed for higher office, or
is she simply at the meeting for foreign policy discussions?

Also important to note, is that McCain had a fundraiser in London held for
him, which was hosted "by kind permission of Lord Rothschild OM GBE [Order of
Merit and the Knight Grand Cross of the British Empire] and the Hon Nathaniel
Rothschild." As the Washington Post reported, "Tickets to the invitation-only
event cost $1,000 to $2,300."18 The Post later reported, "Aides refused to
talk about the fundraiser, or to say how much money was raised, and McCain
dashed through the rain away from reporters after emerging. One guest said
there were about 100 people at the luncheon. If they all gave the maximum, the
event would have raised about $230,000 for the campaign."19

6 Marc Fisher, Jordan Is Comfortable With Power. And With Himself. The
Washington Post: January 27, 1998:

12 Goldman Sachs, About Us: Board of Directors: James A. Jonhson.

15 Klaus Marre, McCain gets support from former secretaries of state. The
Hill: April 10, 2007:

18 Matthew Mosk, Senator's Supporters Are Invited to Lunch With a Lord. The
Washington Post: March 15, 2008:


Andrew G. Marshall contributed to breaking the Climate Change consensus in a
celebrated 2006 article entitled Global Warming A Convenient Lie
[www.globalresearch.ca/index.php?context=va&aid=5086], in which he challenged
the findings underlying Al Gore's documentary. According to Marshall, 'as soon
as people start to state that 'the debate is over'', beware, because the
fundamental basis of all sciences is that debate is never over'. Andrew
Marshall has also written on the militarization of Central Africa, national
security issues and the process of integration of North America. He is also a
contributor to GeopoliticalMonitor.com [www.geopoliticalmonitor.com]
He is currently a researcher at the Centre for Research on Globalization (CRG)
[

http://globalresearch.ca] in Montreal and is studying political science and
history at Simon Fraser University, British Columbia.