It has come to light that Oxford-educated Toby Kendall, 24, an employee of aerospace security consultants C2i International, infiltrated and spied on Heathrow campaign groups across London for a year. According to people from Plane Stupid, he was "suspected" and following an investigation he was confronted and exposed. Heathrow owner BAA has now admitted to the Times newspaper that it has been in contact with C2i, having previously claimed it had no involvement in the spying operation.

C2i International states on its website that its team is "hand-picked from Special Operations at New Scotland Yard". It is run by self-proclaimed Special Forces Veteran Justin King and says it "delivers tailored advice and solutions to companies in a wide range of industries including Aerospace." 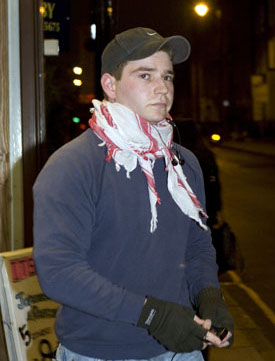 Piecing together evidence including photographs, reports from fellow students at Oxford and website profiles, Plane Stupid discovered the agent who was going by the name of 'Ken Tobias' is in fact 'Toby Kendall' who was captain of the athletics team at Wadham College, Oxford. Kendall went undercover in London Plane Stupid following last year's Climate Camp at Heathrow. According to Plane Stupid he made "elementary errors" as his career as a secret agent faltered at the first hurdle: "Due to his poorly constructed back-story and appalling acting skills. When Plane Stupid fed Kendall false information it was just 48 hours before sources in the aviation industry confirmed that the plans had been reported back to them".

The day after he was confronted, Kendall emailed Plane Stupid saying he "came into the group with a pure heart wanting to make a difference. I still of course hold my principles." Tamsin Omond, 23, a Church of England parish administrator, said today: "The aviation industry brought its special brand of bumbling incompetence to the task of spying on us. Their secret agent was more Austin Powers than James Bond though the question still remains, who paid the espionage agency?"

Plane Stupid is publishing a full dossier of evidence, including web links, photographs and more at www.planestupid.com

This isn't the first case of a spy being uncovered by activists in the recent past. The Campaign Against the Arms Trade (CAAT) was infiltrated by Martin Hogbin. See the enemy within from CAAT and BAe Spy Martin Hogbin and Mark Thomas by Mark Thomas and the 2005 CAAT Steering Committee statement on spying.

In the run-up to the 2005 G8 summit in Scotland, an American woman, known as Anna, contacted anti-G8 medics and various IMC's claiming she wanted to get involved with the protests. She was later identified in the set-up of the Auburn Three trial and turned out to be an FBI informant/agent. According to the FBI's own affidavit, "Anna" had been involved in gathering information on 12 separate cases in the anarchist movement.

Other cases of spies being caught include the case of the Oakland Police Infiltrators taking control of an anti-war group and the case of the Terrorism Task Force operative infiltrating a peace group in Fresno (see the IndyBay article: What Have Peace Fresno Members Learned Since the Infiltration)

Ward Churchill, author of The COINTELPRO Papers, 'Documents From the FBI's Secret Wars Against Dissent in the United States' has documented the history of state infiltration of activists movements in the 1960's and 1970's and several of his talks on this matter are available online: [1] | [2] | [3].

Private spy contractors are a very big business. According to the Christian Science Monitor, the US spent over $43 billion on spy services in 2007. "The bulk of money was spent on private contractors" and the figure does not include "billions of dollars spent by military services on intelligence".

Radical comedian Mark Thomas recently wrote an article in The Guardian about discovering a good friend and fellow activist in the anti-arms trade movement was a spy. It's worth the read in terms of the personal and political costs paid by those infiltrated and betrayed.

In the '90's, the private intelligence group ran 6 spies in the more moderate Campaign Against the Arms Trade and a spy in the extended community of the Liverpool Catholic Worker for five years. At one LCW "Faith and Resistance" retreat, of the 35 present four were spies. The privatisation of spying is a serious issue - as is the privatisation of the military see Blackwater et al. Arms corporations Raytheon are about to take over surveillance of wo enters and exits the UK and Lockheed Martin are tendering for the census.

To create work and money for themselves these spooks inflate and lie about activists to make their services relevant to their customers. They can create suspicion and paranoia in th movement. The movement needs to develop ways of dealing with such suspicions and Plane Stupid seem to have done well here. See the article on Plane Stupid dealing with the issue in today's Guardian

Our community in Liverpool comprised of Catholic Workers and exiled East Timorese - some who had been tortured jailed orphaned by the Indonesian dictatorship BAe were keen to do business.

and the consequent formation of the Liverpool CW focussed on nonviolent resistance to BAe arms supply of the Indonesian dictatorship occupation of East Timor.

Mark Thomas Guardian article, my reflections on the Liverpool experience and a website dealing with these agencies on the lnk below

Corporate spy dressed as pirate in BP and Shell protests

London Hands Off Iraqi Oil [1] congratulates fellow campaign group Plane Stupid on their exposé of corporate mole Toby Kendall this week, and reveals that Kendall has also targeted their meetings over the past six months.

Kendall attended the open meetings of climate change and anti-war organisations over the past year.

C2i International state on their website that their team is “hand-picked from Special Operations at New Scotland Yard.” [3] They list their “key services” as “Counter Espionage & Debugging” and “Executive Profiling and Investigation.” [4]

As soon as London Hands Off began its open meetings in December 2007 ‘Ken’ began to attend, sensing possible direct action against companies in London seeking access to Iraq ’s oil, including BP and Shell. [5]

Activists immediately suspected Kendall , in part due to his militaristic punctuality in attending and departing meetings, and his absurdly suspect email alias: ‘Meneleus’ – the Greek King who hid in the Trojan Horse sent to conquer Troy . [6]

After swapping notes with fellow activists in Plane Stupid, it became clear that ‘Ken’ was widely suspected as an infiltrator.

Ewa Jasiewicz of London Hands Off Iraqi Oil said: ‘We knew Plane Stupid were planning to expose ‘Meneleus’ so we put him to work writing our minutes and dressed him up as a pirate.’ She continued:

‘C2i’s choice of spy really put the ‘Ass’ back into Asset. However on a serious note, it is no surprise that campaigners who are monitoring Shell and BP’s every move on Iraq and are directly supporting anti-oil privatisation campaigners inside occupied Iraq should be of interest to corporate spies’.

Next month, the national Hands Off Iraqi Oil coalition is organising a fundraiser with award-winning journalist Naomi Klein for the Iraqi Federation of Oil Unions – a 26,000 strong independent union campaigning against the privatisation of Iraq ’s reserves.

Jonathan Stevenson, also of London Hands Off Iraqi Oil said: ‘The issue of oil privatisation through occupation in Iraq has been treated as a ‘conspiracy theory’ by some. However this incident suggests that groups challenging the undemocratic and destructive agendas of companies like Shell, BP and BAA are being taken seriously’.

‘We will be taking our message of corporate scrutiny and resource sovereignty for Iraq to BP’s AGM in London next week. ‘Ken’ had promised to bring a bathtub to the protest which we could convert into as a pirate ship. If he turns up we will make him walk the plank.’

London Hands Off Iraqi Oil successfully prevented Toby Kendall and C2i from accessing any sensitive information or participating in any direct action planning.

UK-wide there were 26 protests targeting Shell and BP petrol stations, plus four in the USA and one in Amsterdam . The London ‘corporate plunderers’ tour targeted Shell, BP, Erinys private military security company, The International Tax and Investment Centre and the National Portrait Gallery – for their sponsorship relationship deal with BP.

NEWS: Meet the private security firm that spied on Greenpeace and other environmental outfits for corporate clients. A tale of intrigue, infiltration, and dumpster-diving.

In addition to focusing on environmentalists, the firm, Beckett Brown International (later called S2i), provided a range of services to a host of clients. According to its billing records, BBI engaged in "intelligence collection" for Allied Waste; it conducted background checks and performed due diligence for the Carlyle Group, the Washington-based investment firm; it provided "protective services" for the National Rifle Association; it handled "crisis management" for the Gallo wine company and for Pirelli; it made sure that the Louis Dreyfus Group, the commodities firm, was not being bugged; it engaged in "information collection" for Wal-Mart; it conducted background checks for Patricia Duff, a Democratic Party fundraiser then involved in a divorce with billionaire Ronald Perelman; and for Mary Kay, BBI mounted "surveillance," and vetted Gayle Gaston, a top executive at the cosmetics company (and mother of actress Robin Wright Penn), retaining an expert to conduct a psychological assessment of her. Also listed as clients in BBI records: Halliburton and Monsanto.

Read the whole article on one page: