Vigil to mark the 5th anniversary of the invasion and occupation of Iraq. Meet this evening, Wed 19 March, at the junction of Hope Street and Queen Street in Wrexham, 4.30-5.30pm. 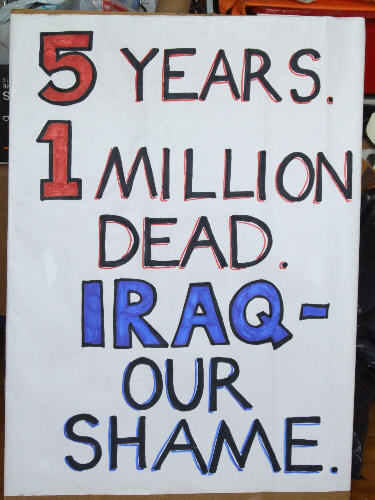 Members of Wrexham Peace & Justice Forum and Wrexham Women for Peace
will be holding a vigil to mark the 5th anniversary of the invasion of
Iraq on Wednesday 19 March.

"On my orders, coalition forces have begun striking selected targets of military importance to undermine Saddam Hussein's ability to wage war... I want Americans and all the world to know that coalition forces will make every effort to spare innocent civilians from harm... We have no ambition in Iraq, except to remove a threat and restore control of that country to its own people." [1]

It is estimated that over 1 million Iraqis have suffered violent deaths since the invasion in 2003 [2], with very many more injured. Over 4 million Iraqi people (approximately one in five of the population) have been displaced from their homes during this and previous troubles [3]. Much of the land has been poisoned forever with uranium munitions [4].
28% of Iraqi children are now malnourished, compared with 19% in 2003 [5]. According to UN figures, barely one in three Iraqis now has access to clean drinking water [6], leading to life threatening health problems; for example there was a serious outbreak of cholera in Iraq last summer [7]. One in eight Iraqi children now die before their fifth
birthday, more than half of these in their first month of life [8]. Tens of thousands of Iraqis are detained, many without trial, and a recent UN report has expressed continuing concern about this and other violations of human rights and civil liberties in Iraq. [9] Oil companies including Shell and BP, with the support of the British government, are pushing for an oil law to be passed in Iraq which would give these companies a
leading role in developing and profiting from the country’s oil.[10]

On Wednesday, we will stand for an hour in silent vigil, remembering those who have suffered and who continue to suffer in Iraq since the invasion. We will reflect on the part our country has played in this suffering.