Talk and discussion on the recent rise of fascism in India and people resisting it. 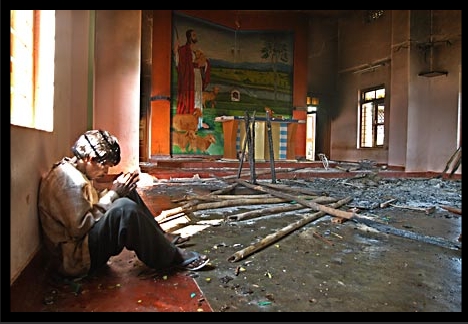 A tribal christian praying at a torched down church

The rise of neo-liberalism in India, since late 80s, has only been matched with the rise of neo-fascism of Rashtriya Swayamsewak Sangh ([RSS], the National Volunteer Corps), its political arm Bharatiya Janata Party ([BJP], the Indian People’s Party) and similar political organisations. From a fringe group of religious fanatics, admiring Hitler’s ethnic purification drive, RSS has grown into a massive socio-political force with a membership of 4.5 million, a national trade union, think-tanks, presence in the central and state bureaucracy, chain of primary and secondary schools, charities and international presence in 150 countries of the world.

RSS’s ideological leaning first came into the limelight in 1948, when one of its members assassinated Gandhi because he was “sacrificing” Brahminist (Hindu) interests in favour of appeasing Muslims. In 2002, Gujarat, a state ruled by RSS’s political arm BJP, became the first “lab” in implementing their supremacist ideology known as Hindutva. The experiment supported by the state Chief Minister, bureaucrats, police forces, educational institutes, and various business houses took form of the socio-economic boycott of Muslims and eventually culminated into religious riots that left more than 2000 Muslims dead and 150,000 displaced. More recently, December 2007 saw spate of planned attacks against tribal Christians in the Indian state of Orissa, which besides being most poor among Indian states is being ruled by a BJP coalition government. The attacks in which 10 people were killed, hundreds severely injured, 40 churches and other properties belonging to the Christians torched down are said to be the result of “gullibility” of the local tribals who converted to Christianity.
Growth of RSS and its Hindutva philosophy has also been reflected in the South Asian diaspora which mainly has acted as financier for various RSS projects through its international charities. Awaaz-South Asia Watch submitted a report to the House of Lords, in 2004, stating that millions of pounds raised for humanitarian causes, such as aid for the victims of 2001 Gujarat earthquake, had been funnelled to the RSS. That the ideology propagated by these fascist organisations has etched the divisions among the South Asian community along religious lines deeper is to say the least.
Public admissions, by various leaders associated with RSS, of making Orissa the second lab of Hindutva and re-election of BJP government in the state of Gujarat even after the shocking expose by a national magazine Tehelka, call for an imminent discussion among progressive groups to take concerted measures stopping the alarming march of Indian fascism.