On the 10th April 2007, 11 people walked into the Ratcliffe-on-Soar power station and locked on to the coal conveyor and assorted plant there. Their objective was to take direct action to halt operations and thus to diminish the CO2 emissions of the E-on plant, the greenhouse gas thought to be largely responsible for climate change. They were all charged with aggravated trespass and throughout the court case (which lasted for 3 days), the defendants argued that yes, they did take these actions, but employed the defence of "duress of circumstances" or necessity, and pleaded not guilty.

On Monday 25th Feb, 10 defendants (one having had the charges dismissed due to lack of evidence) returned to court to receive the judgement. Judge Cooper had earlier said that he wished to compliment all the defendants on the way they had handled themselves and on the presentation of their case. However all were found guilty.

Audio: Featured in #2 'the March Show' on Riseup Radio 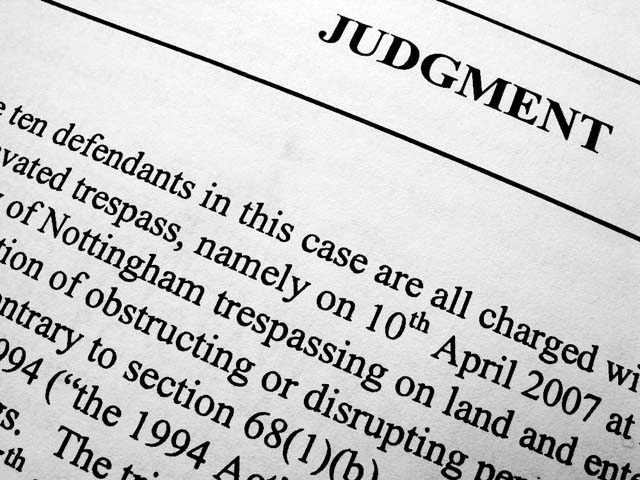 At the beginning of the case, there was legal argument on if the court would hear this defence. It did and the case was proceeded with in making such argument. It is thought to be the first case dealing with environmental matters, that this defence had been employed.

On Monday 25th Feb, 10 defendants [one having had the charges dismissed due to lack of evidence] returned to court to receive the judgement. He had earlier said that he wished to compliment all the defendants on the way they had handled themselves and on the presentation of their case. However all were found guilty.

The District Judge Morris Cooper said that he had rejected the defence of necessity, this being so, and the defendant had all admitted their action they were thus guilty of these offences.

There had been extensive evidence presented to court by an expert witness Dr Simon Lewis. The court had accepted this without contention. In the written judgement DJ Cooper points out that ...

Dr. Simon L. Lewis is a Royal Society Research Fellow, at the Earth and Biosphere Institute, University of Leeds and has written a recent article for the Guardians Comment is Free, it's time for a body count, in which he wrote "In the trial, for which I was an expert witness, crucial questions were how many people does climate change kill, and what proportion is the UK responsible for?".

Also, I was struck by a quote from one of the authorities relied on in making the decision. London Borough of Southwark V. Williams [1971].

"Well one thing emerges with clarity from the decisions, and that is that the law regards with the deepest suspicion any remedies of self-help, and permits those remedies to be resorted to only in very special circumstances. The reason for such circumspection is clear, necessity can easily become simply a mask for anarchy".

So, there you have it!

They were fined varying amounts between £100 - £250. Additionally, the prosecution asked for £100 costs each and the victim surcharge of £15. The total bill coming to £2670. All were given time to pay.