Brian Haw the peace campaigner is standing for London Mayor 2008 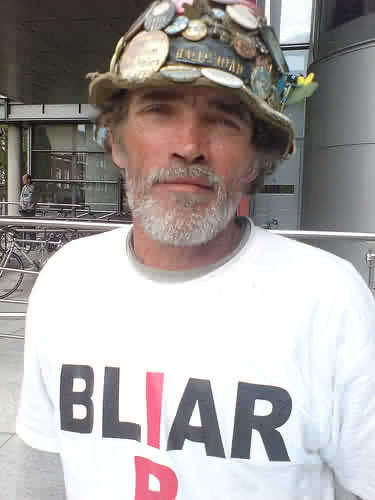 Peace campaigner Brian Haw has been continuously protesting in Parliament Square since 2nd June 2001. Initially he was campaigning against the economic sanctions on Iraq and the bombing of the country by the US and UK. After 11 September 2001, he widened his focus, directing his messages of peace against the 'war on terror', the terror that the US and UK have inflicted on Afghanistan and Iraq. He protests on behalf of those innocent people who suffer and die in other countries, as our governments seek to further their own economic, military, political and strategic interests around the world.

Brian Haw has received extensive international media coverage and has had visitors from numerous countries as a result including many heads of state. Many people from the UK and from abroad have made contributions to Brian's display with their own messages of peace. However, Ken Livingstone and Sir Ian Blair have staged a sustained campaign of persecution against Brian Haw and his fellow peace protestors which has included fencing the square and staging a raid with 23 police officers who removed and damaged the display. Both actions were declared illegal by the High Court but Ken Livingstone and Sir Ian Blair have continued their vendetta against Brian Haw. Don’t you agree this is a disgraceful waste of London’s money and Metropolitan Police resources?
UK Laws have also been changed specifically to try and stop Brian Haw’s peace protest. What a total waste of our government’s time and what a total waste of our taxes.

Brian Haw is now seeking election by running for London Mayor as an independent candidate in 2008. Join the campaign and help clean up politics and stop the genocide in Iraq, Afghanistan and wherever else they want to invade next. Brian Haw is the only Pro Peace candidate. Brian Haw was elected in a poll by Channel 4 viewers ‘The Most Inspiring Political Personality of the Year’ with 54% of the vote and now he has been nominated ‘Most Inspiring Political Figure of the Decade’.
If elected, Mayor Brian Haw has pledged to end the phoney war on terror and will seek the dismissal and prosecution of senior Met officers for the murder of Jean Charles de Menezes. Mayor Brian Haw will also use his position if elected to initiate a full inquiry into the events of the 7th of July 2005.

Today’s London under Labour control is an unpleasant place to live and work. There is more crime, more congestion and more pollution after 8 years of Ken Livingstone in charge. Under Ken our transport fares have doubled. Mayor Brian Haw pledges to cut congestion and pollution by cutting bus and tube fares as well as scrapping the Congestion Charge and making more efficient use of our existing roads by dismantling certain Bus Lanes. Brian also cannot see the purpose of elongated buses for which London’s roads are totally unsuitable. Unlike Ken, as mayor, Brian Haw will promote the use of clean fuels such as Bio-Diesel, LPG and Electric delivery vans. Mayor Brian Haw will put our police back on the streets thereby making our children feel safer walking to school. Our parking fines and congestion charges have been used by Ken Livingstone’s GLA to buy illegal hollow nosed bullets as were used to murder Jean Charles de Menezes and now American Tasers for our police and therefore help pay for the phoney war on terror. Brian Haw will put our police back catching real criminals such as drug dealers, rapists and muggers. Ken Livingstone has supported Gordon Brown in his war against our Muslim brothers and sisters, therefore the blood is on his hands as much as Gordon Brown and Tony Blair.

Brian Haw grew up in Barking, East London and if elected will make London a nice place to live, work and visit as it used to be. As a former small businessman Brian Haw believes that our high streets and local shops are an important part of our infrastructure. We therefore need common sense parking controls not a revenue raising tax machine. We need bicycle stands on every high street and a sensible visible police presence on every high street all day every day. As a lifelong Christian, Brian sincerely believes in equal human rights for all and animal rights. Brian has given up everything to promote his message of peace and London really will be a nicer place with Brian Haw as London Mayor.

Let’s kick these war criminals out of office and take our country back. Brian pledges if elected to use his position to campaign to bring our troops home. London Mayor Brian Haw will also expose the bungs and sleaze and corruption that has been a hallmark of the Labour government and Labour run Greater London Authority. The public are fed up with career politicians like Ken Livingstone. Brian Haw promises to bring common sense and honestly to UK politics. Give them a bloody nose and elect Brian Haw as London Mayor in 2008.