This morning a group of 15 climate change activists from protest group Food Not Fuel entered the BioFuel Expo & Conference taking place at the Newark Showground and took over the keynote speech. Oliver Mace, CEO of BP Fuels, the lead sponsors of the event recieved a cream pie in the face. Another campaigner was D-locked to the podium and various alarms were placed around the place. The hall was emptied and talks were canceled. There were no arrests.
BP Executive pied as Europe's largest BioFuels Event disrupted

This morning a group of 15 climate change activists from protest group Food Not Fuel entered the BioFuel Expo & Conference taking place at the Newark Showground and took over the keynote speech. Oliver Mace, CEO of BP Fuels, the lead sponsors of the event recieved a cream pie in the face. Another campaigner was D-locked to the podium and various alarms were placed around the place. The hall was emptied and talks were canceled. There were no arrests.

They were protesting against planned expansion of biofuels citing its contribution to deforestation and the fact that it will continue to contribute to climate change. The activists complained that biofuels on a large scale is greenwash and companies such as BP are ignoring its negative impacts on the environment.

Protester Michelle Lynch said, "What they are promoting is a replacement to fossil fuels, but the reality is that they are little better. Large scale plantations are not the solution; reducing our consumption is the only realistic way forward."

Another protester, Thomas Bradshaw pointed out, "Biofuels will be taking food from the mouths of the hungary when there are already 800 million people suffering from malnutrition. These corporations are effectively encouraging the erosion of valuable ariable farmland and rainforests vital for combating climate change."

1. The protestors can be contacted at 07880 937 511. Their critique argues that radical social change is needed to deal with the impact of peak oil and climate change, and that seeking solutions such as carbon trading and biofuels are not the answer, as the real problem is unsustainable economic growth.

2. The BioFuels Expo & Conference (www.biodiesel-expo.co.uk) is the largest of its kind in Europe, and brings together big industry players such as BP Fuels, Deloitte & Touche and many chemcial, agricultural and manufacturing companies.

3. A comprehensive critique of biofuels can be found at BioFuels Watch (www.biofuelwatch.org.uk) who are a distinct group from Food Not Fuels, but are hosting their own demonstration against the Conference.

4. Text of leaflet distribute to attendees.


Biofuels & Fossil Fuels: Biofuels that are not produced by recycling waste oil are the direct product of large scale monoculture. Currently the amount of fossil fuels required to produce biofuels is greater than the amount of fuel you get out: you have to make the fertilizer, run the agricultural machinery, transport the feedstocks and fuels, and refine the plant matter into fuel.

Biofuels & Food: The land that is used to farm biofuels has to come from somewhere. If it is agricultural land used for food then there will be less food. Maize, Mexico's staple crop, have increased massively due to American demand for bioethano. Adding to the number of people living below the poverty line.

Biofuels & Land use: If not agricultural land, then biofuels will be grown on virgin rainforest or wetland. 1/3 of all greenhouse gas emissions come from the destruction of living carbon sinks. The Amazon rainforest is the largest driver of the climate on the planet and expanding bioethanol plantations will push it to extinction. Wetlands, eg peat, contain more carbon that the whole atmosphere and cover just 1% of the worlds surface. The largest peat bogs in the world, in Indonesia, are currently being drained for palm oil plantations. If greenhouse gas emissions continue as they currently are we will go beyond the climate tipping point causing mass extinction of life on earth.

Biofuels & Local Control: The driving force beyond the expansion in biofuels are big corporations such as BP & Monsanto, and government - the very people who have got us into this mess. They are using biofuels as a way to continue their position of power into the post peak oil world. To stand a chance of survival the control of land must be by local people for local people.

The Solution: We will need to reduce our consumption to levels that we can meet ourselves. This WILL mean a reduction in luxuries, like the luxury to travel. Some biofuels will be used, but at a fraction of our current oil use. We need to end the search for technological solutions to economic problems. We need to localise our economy, produce our own food, make our own tools and use less.

We need an end to economic growth.

Interesting to note that one of the main speakers was a certain Alan Lovell, now CEO of Infinis, who are a renewable energy generator (mostly from biogas and landfill gas). This chap was the CEO of Costain (civil engineering firm) whilst they were building the infamous Newbury Bypass in the 1990s. Could it be that all the targetting of Alan and his company back then persuaded him to seek a more enviromentally acceptable (albeit still highly corporate)career path?

Not according to this: 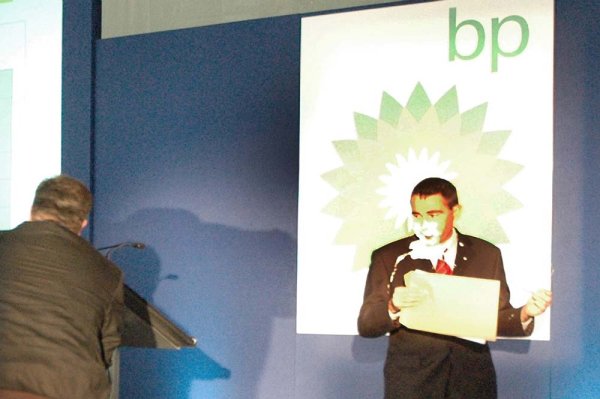 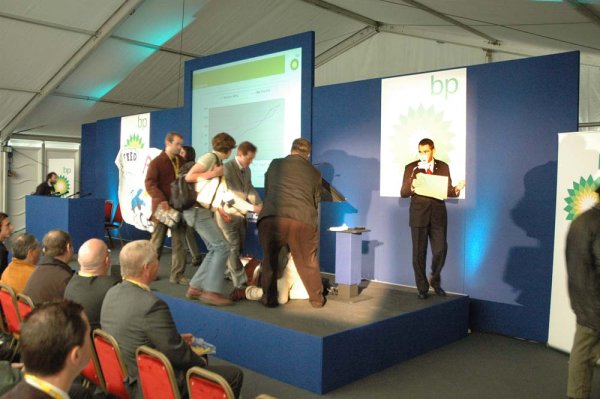 Just a preview. More photos will be published soon...