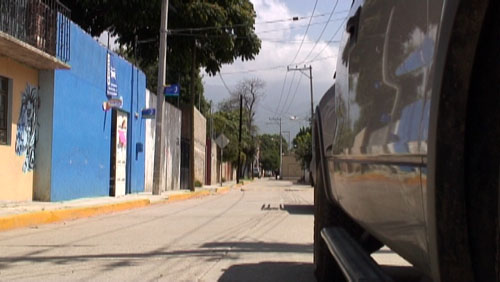 The street of CIPO-RFM HQ 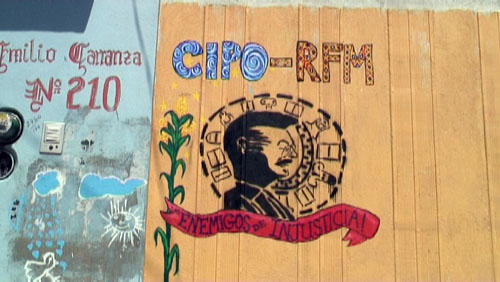 3.50am, 7 October, 2007: Gun shots rang out outside the communitarian house of CIPO-RFM in the district of Santa Lucia del Camino, Oaxaca.

Following a tense time, determining whether it was safe to exit the headquarters, people went outside to see six heavy calibre bullet holes in the house of Santa Lucia PRI municipal presidency.

The military, federal riot police, municipal police and plain clothes officers soon moved in, they claimed, to protect the voting of the municipality.

According to CIPO-RFM, one compañero, Juan, was viciously beaten in the face and hospitalised by uncover cops and his car was stolen.

On 8 October at 2am, when part of the delegation set off on the Vicam trip, they faced harassment from the authorities, first from public security officers, then aggressively by the police, who interrogated them for some time.

On 9 October, around 5am, the Vicam delegation were stopped and again interrogated by the military, infantry battalion 89 of the third military district. The military were backed up by Obregón City officials, who refused to identify themselves.

This is just the latest incident involving those attending the Indigenous People of America meetings, including forced evacuations of Zapatista towns and a direct attack on a meeting by Yaquis authorities.

CIPO-RFM have been the brunt of brutal oppression for years, which has increased recently following escalated attempts to peacefully halt the destruction of communal forests in the Sierra Norte, north of Oaxaca.

Jason Parkinson's blog is no longer at the site listed above.

It is now at