Last Tuesday, the German police arrested 4 activists in Berlin under the suspicion of being members or supporters of a terrorist group. 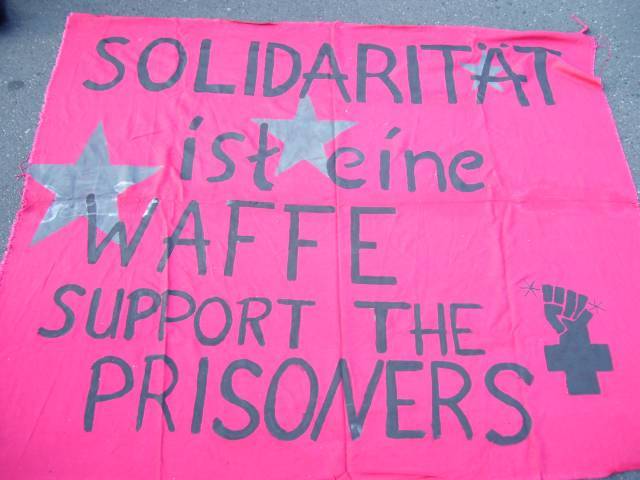 "Solidarity Is A Weapon"

Last Tuesday, the police arrested 4 activists in Berlin under the suspicion of being members (section 129a) or supporters of a terrorist group called "militante gruppe" (militant group). police suspects the "militante gruppe (mg)" to be behind several arson attacks (prosecutors say at least 25) against police and army vehicles in the last years, some of them in the run up of the G8 2007, including an attack against vehicles of the german federal police to protest its involvement in deportations and an attack in response to the massive police raids against G8 activists.

The police used the arrests for a series of raids in Berlin last week, including several private places and one bookshop.

Three of the arrested activists are under suspicion of having tried an arson attack on army vehicles last week, the fourth activist is under suspicion of having "written statements for the group". Prosecutors said that his publications (he is a sociologist) showed "parallels in terms and expressions with the militante gruppe". (!) All four activists are now under arrest in the prison Berlin-Moabit.

Many groups and initiatives are preparing a german wide demonstration for saturday september 15th to protest the increasing police repression and the involvement of the German army in Afghanistan.