FIT for what purpose?

"Teams of 12 specially trained officers will form a Forward Intelligence Team (FIT) who, operating in uniform, will seek to build a "rapport" with "street activists" so that people "likely to provoke disorder can be identified early in an event"

The FIT first surfaced in the early 1990s, as part of the Public Order Intelligence Unit (CO11), a section of the Public Order Branch of the Metropolitan Police. They were initially targeted at football fans but were soon extended to cover a wide variety of political events, and their tactics have more recently been used in town centres as part of the "community policing" strategy. Sometimes they are deployed outside of the Metropolitan area, as at the G8 in Scotland for example, and most UK police forces now have officers trained in their methods. 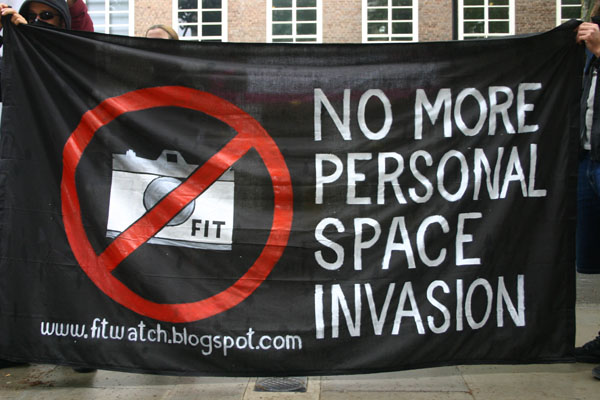 Why do the FIT target some events and not others? Their presence at large demos of dissent might not be surprising but why pensioners and Critical Mass cyclists? You never know when or where they will turn up. The FIT sometimes try to engage you in friendly conversation to extract intelligence and are claimed to use covert methods to obtain unpublished information.

A typical FIT will consist of a photographer/videographer with two yellow-jacketed minders, a note taker and one or more 'controllers'. The controllers will point out certain individuals in a crowd to be photographed. At other times the photographer will snap off shots on his own initiative of people at random, which is thought to be an intimidation tactic aimed at discouraging political dissent. A police photographer will sometimes shove his long lens right in people's faces and at other times will shoot in semi-concealment from a distant balcony.

OK, you now want to get your own back and photograph them instead. Why is the note taker trying to conceal his face and the police photographer hiding behind another cop? It is odd that some of the FIT really do not like being photographed and you wonder why.

Under the Data Protection Act you are entitled to get hold of any pictures the police may have taken of you but this is not as straightforward as it might seem. No surprise there then!

"Some activists were assigned their own 'personal' escort who followed them at all times and one cameraman continuously took photographs of the same group of people (estimate that he must have taken over one hundred pictures of the same twenty-five people!)."

It's a serious issue. They take on two clear roles, harassment and intelligence gathering.

It can be very intimidating having your picture taken at events, meetings or protests.

Of course the surveillance state is expanding with more forces beginning to use the cop cams - small camera units attached to police officers helmets, but FIT are clearly there to intimidate people as well often demonstrating disgraceful behaviour.

Often they will approach people and call them by their christian or surnames, make references to where they live, ask about personal details, make insulting insinuations and derrogatory remarks. I've seen them kicking photograpers in the shins at demonstrations, lieing about what details people need to provide during stop and searches, telling members of the public that there are dangerous extremists inside X building and that people shouldn't go near them, singling specific better known campaigners out for verbal and physical abuse, following people who are talking on the phone putting their ears right next to their heads and then threatening to arrest people if they push them away etc etc etc

People shouldn't just photograph these officers, they should be videod constantly and if appropriate legal action taken against them.

The FIT outside the Climate Camp meeting in London. 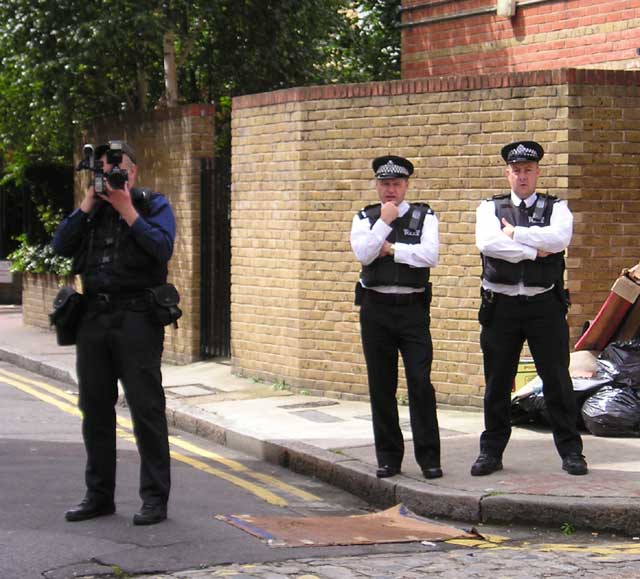 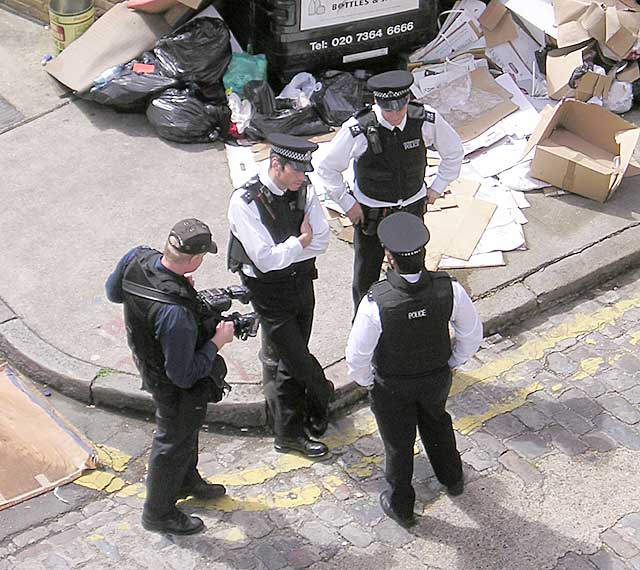 I wonder what they are discussing?

They hung around photographing people as they arrived and left, sometimes trying to engage them in conversation. They must get pretty bored, missing out on all the serious crime that is rife in London. Anyway, come lunchtime they had had enough and left.

A serious matter which we need to tackle

Making comments about the FIT team looking like overblown traffic wardens or throwing things out of windows at them is pure bravado. There is nothing wrong with taking the piss out of them, but do it to their faces. Doing it here undermines the serious efforts people are now making to oppose the FIT.

The FIT teams have had a serious effect on our movement, an effect we desperately need to tackle.
It is also offensive to those who have suffered harassment, intimidation, assaults and wrongful arrests at their hands. Not to mention the number of activists who have suffered psychological trauma as a result of their actions.


Whilst I have no problems with throwing things at cops, doing so from a social centre, would jepodise the future of the building, and as someone has mentioned, give them an ideal excuse to raid the place. Furthermore, do it yourself. Don't post comments and say "oh someone should have done that" when you're not prepared to take the risks and consequences which come with such an action. I