Crime of the Century - Article 3

Nicholas Sarkozy has responsed to our second article (which you can read here: 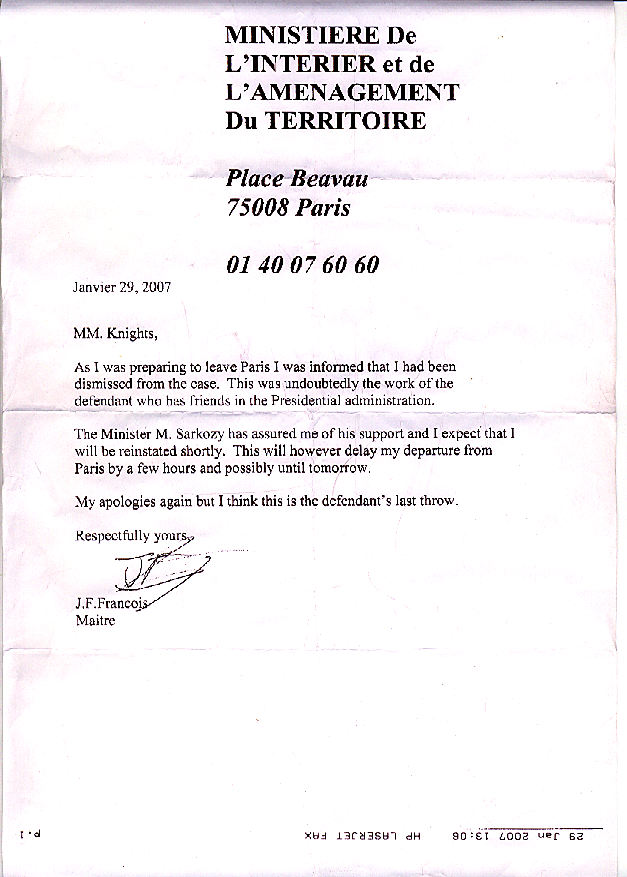 Letter in which Sarkozy is named 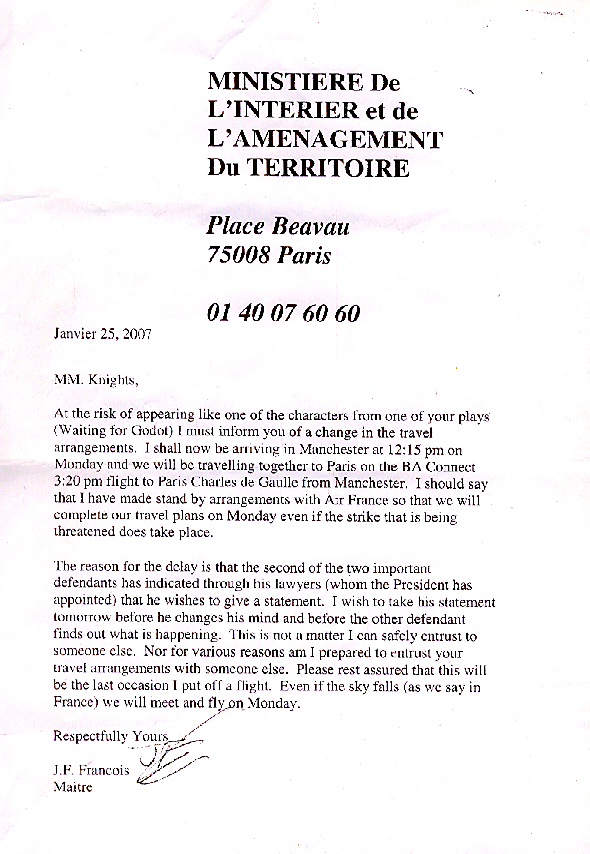 Referring to Sarkozy's influence and the involvement of other key defendants

Crime of the Century - Article 3

1.Nicholas Sarkozy, newly elected President of France has responded to our second press release dated 17th May 2007 released on IndyMedia (this was read out in the Brussels court yesterday) – Read here :

http://www.indymedia.org.uk/en/2007/05/370924.html
2.We are Allan And Julie Knight, we have been in a legal battle since 1999 to date – we are litigants in person. This case is about non-payment of our work invoices for vodaphone plc. This was a simple commercial case.
3.The information in Article 3 is further proof of the perversion of justice that Nicholas Sarkozy carried out in our case according to Lord Justice Clarkes evidence in the criminal trial in Brussels wherein Sarkozy was a co-defendent.
4.This is an attempt to 'break free' from the injustice we suffer and make the courts honour their judgement, which are totally in our favour and have been for eight years!
5.Please help us publicise these facts worldwide – copy them to your website, email them to your friends, etc, as Nicholas Sarkozy is trying to block publication.

6.In the court the President of France, Nicholas Sarkozy's, 17 Lawyers were once again trying to pervert the course of justice by pleading;
a) that publication of the sealed and circulated judgements should be prevented (due to our articles on Indymedia 14th and 17th of May 2007) because “Now, how would it look to the public?”
b) that the brussels court sealed and circulated judgement around Europe should be revoked (now we have exposed him through Lord Justice Clarkes evidence as a criminal and a fraud)
- Our comment: what Sarkozy really means is 'How would it look when he didn't defend himself against Lord Justice Clarkes evidence/testimony against him in the Brussels criminal trial? - Guilty as charged!
7.Also, President of France, Nicholas Sarkozy and his 17 lawyers made mulitple applications to try and have us arrested by the British police. Our advocate and barrister defended these applications successfully.
- Our comment: He cannot cope with the truth being told in public about HIS OWN crimes.

8.Due to the releases of Articles 1 & 2 of 'Crime of the Century' on Indymedia; The President of France's solicitors were running around 'like headless chickens' not knowing how to defend this doomed President in front of the judges.
9.Our barrister made the points to the panel of 15 judges that they are “TOTALLY RESPONSIBLE” for this fiasco, and then he went on to say, “all you had to do was release the judgement (publicly) and give the Knights safe passage to their legally awarded monies” (awarded by the Strasbourg court for the abuse of our human rights by the British government and Vodaphone Plc in 2006)
10.The look upon the faces of the panel of judges was a bemused one – 'mouths gaping'
11.The Brussels European court have, for the 7th time, agreed to release the publication of the judgement in the interests of justice, on the 18th May 2007
- Our comment: Nicholas Sarkozy has coerced the court into delaying the publication on the previous 6 occasions, whether the 7th will be any different, we are not holding our breath!
12.We have been informed that the President of France, Nicholas Sarkozy, is 'incandescent with rage' at our publication and exposure of his lack of defence against Lord Justice Clarkes testimony and evidence against him at the criminal trial in Brussels. :o) Ha!
- Our comment: Why Nicholas Sarkozy is attacking us and preventing the closure of our case when we did not give any evidence or testimony against him, we do not know, he should be attacking the source of the evidence, Lord Justice Clarke. He should have defended himself when he had the chance – in reality, he's angry at himself for a silly oversight that could cost him his Presidency. The court should understand this point and simply authorise the public release of the judgement and its findings, and bring the whole matter to a close.

13.Our French advocate has meanwhile been successful in front of the Council of State in blocking the President of France's powers to pardon and release Vodaphone Plc/British government personnel and all others involved whom are being held in cells in Paris.
14.Due to the ruling with the Council of State, the only option left for the President of France, Nicholas Sarkozy, is to get a 2/3 majority decision in the French Parliament to release his criminal friends. Note: No French President has ever been successful in achieving the 2/3 majority required regarding criminal issues such as these.

President of France's Efforts to Achieve His 2/3 Majority

15.Sarkozy has been in very close discussions with a far left candidate whom he was offering a high position within his government.
- Our comment: This is further proof of the perversion of justice that the President of France, Nicholas Sarkozy, will go to ANY lengths to undermine justice in our case, and possibly beyond.

16.We have attached to this article 2 further letters which show the corruptive influence (and the effects) the new President of France, Nicholas Sarkozy, has had on our case.
17.These letters are from the Criminal court in Paris.
18.The below notes are a key (in the same way a map has a key) to understanding the attached letters:
a) The letter dated the 25th January 2007 – Second Paragraph
“the second of the two important defendants” was a Mr Bernard Eder of 1 Essex Court, London.
b) The letter dated the 29th January 2007 – Second Paragraph
The Minister Sarkozy referred to is the newly elected President of France.
- Our comment: His duplicity is visible for all when he had Mr Francois, prosecuting judge in the criminal trial in France, reinstated and then tried to force him to 'throw the case' using a Ministerial order, when he didn't Mr Francois resigned - Read all about in Crime of the Century Article 2 points 17 to 20.
19.Due to Lord Justice Clarke's testimony/evidence it is clear that the maneouvres the defendants were employing to disrupt the criminal trial in Paris France (and travel arrangements as outline in the attached letters) were being orchestrated and controlled by Nicholas Sarkozy.

Release the Brussels Criminal Trial Judgements and give us safe passage to our awarded monies and protect us from all harrassment from the defendants and their duplicitous supporters in the interests of justice, and for your own credibility!

One Race, One Nation, One Love, One Truth