1. Day after eviction of Ungdomshuset - TIMELINE

The day after the eviction of Ungdomshuset and the following demonstrations, barricades and riots in Copenhagen, the police is expecting more troubles. Activists are meeting tonight and a few happenings are taking place around town. Things have been planned for tonight and the fight is obviously not over yet! A lot of people have now been detained for 14 days or more.
17:22
After the police stopped a parade moving toward the "West Prison" (main prison in Copenhagen) the demonstrators have left the parade. It had also become smaller since it started
Now people are instead gathering on Blågårds Plads. A source says that there are around a 100 persons

On the webpage for Ungdomshuset following activities are announced for friday:
#19.00: Public meeting for activists in Folkets Park
#22.00: Streetparty from Gammeltorv to Sankt Hans Torv with DJ's and live music
#24.00: Demonstration from Sankt Hans Torv. The concept is "Follow the green flag"

17:00
The little parade from Blågårdsgade is moving towards "West Prison".
The police has followed the demonstration and has now stopped it. Officers are checking identities of demonstrators

16:45
While yelling different sentence about peace, a little gathering of around 30 demonstrators followed by 3 policevans are moving down Blågårdsgade towards Åboulevarden

16:25
Around 50 demonstrators have gathered in front of Blegdamsvejens prison where several arrested from yesterday are located.
Everything is calm and the police has apparently stopped checking people on Sankt Hans Torv next to the prison

16:17
Ungdomshuset is resurrected - in Second Life on the internet. The new virtuel house is placed next to the virtuel TV2 News - because Ungdomshuset is the main source of the tv stations news anyway.

15:57
Solidary action where activists removed advertisements from busstops in Århus last night and replaced them with posters for Ungdomshuset can now be seen on youtube.

15:52
Even though much of every day life has returned to Norrebro, the police is still very present in the area. Sources inform us, that officers are checking people on Sankt Hans Torv

14:46
The social democrats have welcome the activists occupying their party office. They haven't asked the police to throw them out.
There is still around 10 activists in the house and 20 outside
Helle Thorning Schmidt, the national leader of the party, who was shortly by the office earlier, should apparently have expressed that she thought the activists should be thrown out

Nonetheless the activists are willing to negotiate.
- "We have offered that we will negotiate with both the social democrats and the city council regarding finding a new house, says the spokesperson

14:30
Masked constructionworkers are emptying Ungdomshuset, writes Politiken.dk The reason for the mask is that the workers don't want to be recognized.
At the same time several sms's are being send around with names of companies that is thought to be working in the house

The work is being surveilled by the police. Curious people are asked to leave the area
A big truck is parked in front of the house and there are several cars with cranes
The constructionworkers are throwing out boxes, paint, furnitures and barricades

The things that have been left in the house is also removed. Politiken.dk writes that the owners must demand them from the owner of the house, Faderhuset

– We have only taken the things having a value as evidence, says the spokesperson for the Copenhagen Police to Politiken.dk

14:03
the citizen group supporting Ungdomshuset is maintaining the plan of a demonstration on saturday (tomorrow). It is starting from two different locations, Christiania and Enghave Plads at 14.00, and meeting on the Townhall square at 15. It is a peaceful demonstration

12:41
»We aren't leaving the building before they come up with a solution« says the group that has occupied the Social Democrats main office in copenhagen and now demand a ungdomshuset in Copenhagen, according to DR

12:19
Per Larsen from Copenhagen Police says to the media that 75 of the so far 217 arrested yesterday will be presented for a judge during today. 34 persons who all were in Ungdomshuset when th police entered has been detained for 27 days

12:09
The office of the party The Social Democrats (second biggest in Denmark, biggest in Copenhagen) has been "squatted" by activists. The office is the party's main office in Copenhagen. A spokesperson for the activists says the reason for the occupation is that the politicians apparently havent understood that the problems with ungdomshuset are political.

– "The reason for this occupation is that the politician apparently haven't understood that this is a political problem. We are trying to focus on this by squatting a political party's office" an activist says to TV2 News

12:03
There were demonstrations and actions in 20 german cities yesterday in solidarity with Ungdomshusets. See more on indymedia.dk

11:02
The police in Copenhagen has asked for more officers from around the country. From nothern Jutland 2 busses full of policemen were sent to Copenhagen around 22 yesterday night. Also the south-eastern part of Jutland has send officers: "To help them now when they are in need" says inspector Jørgen Hoxer to local DR

More pictures of 2nd day of stand off in Copenhagen 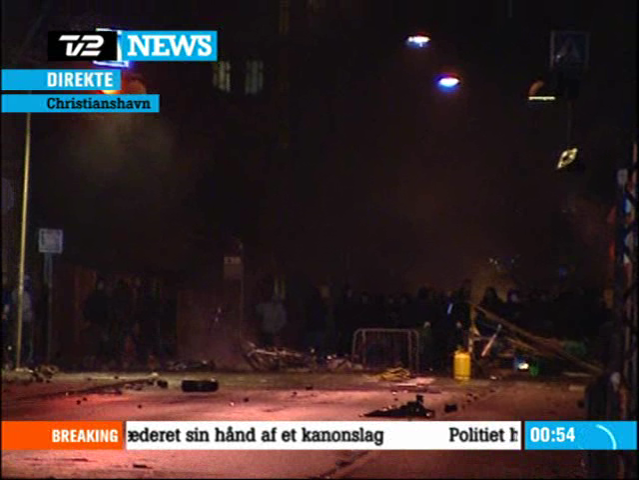 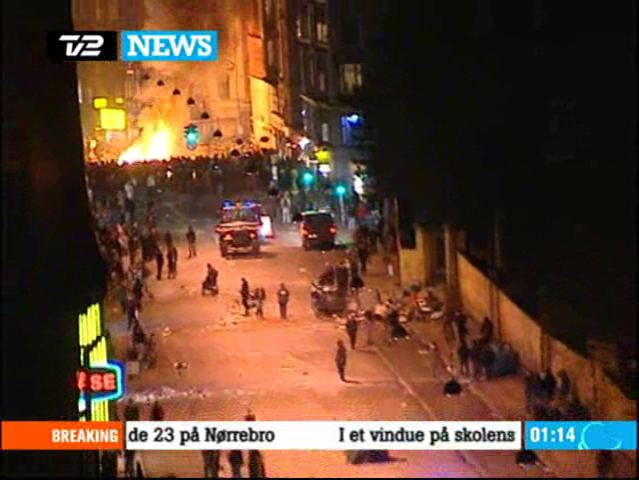 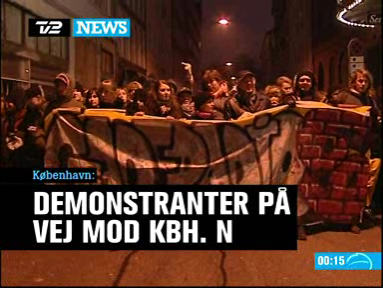 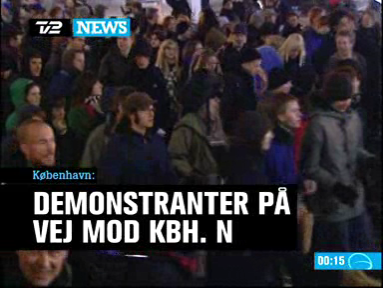 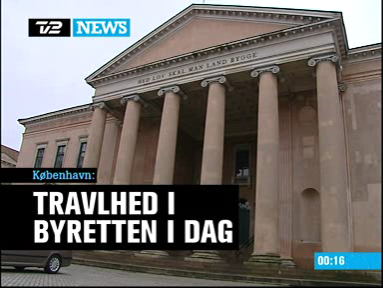 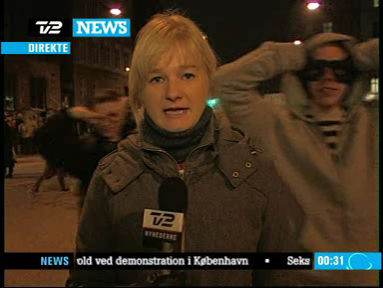 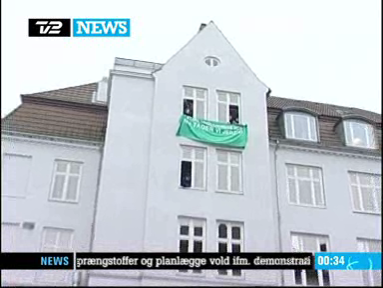 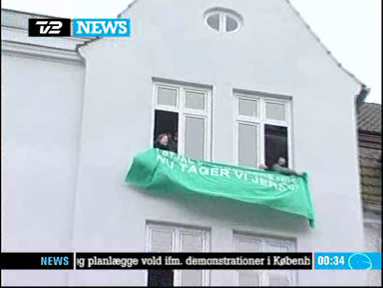 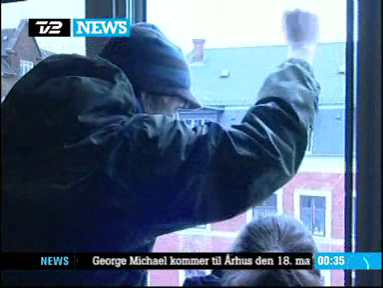 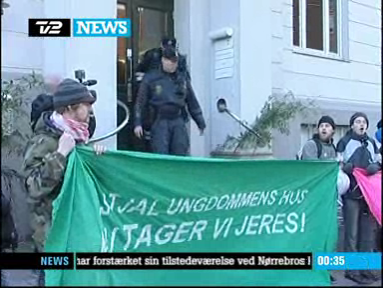 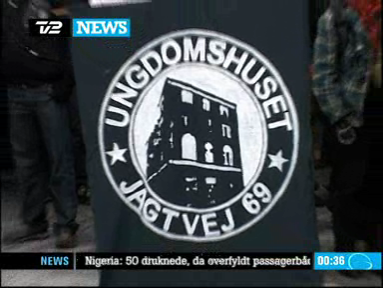 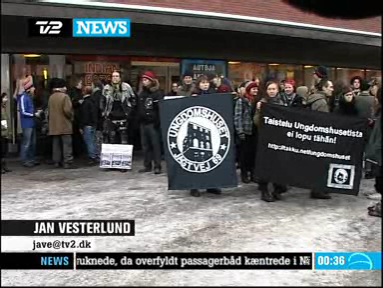 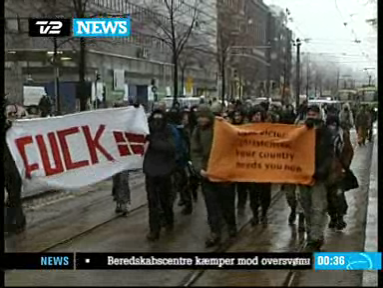 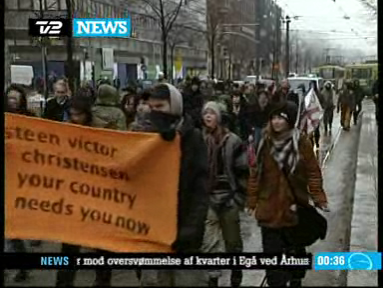 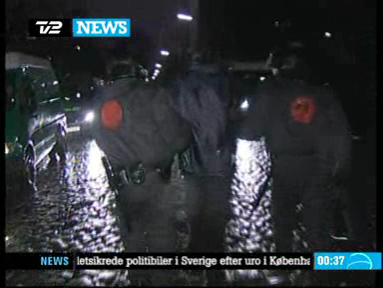 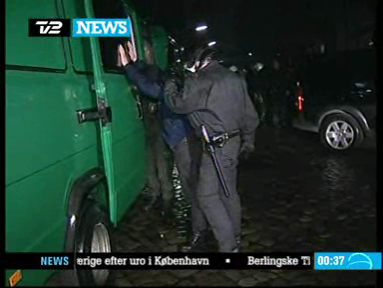 Here some screenshots of Danish TV of the day after the eviction of Ungdomshuset. These pics include the occupation of one of the party offices of the social democrats, the court were some of the arrested were brought in front of a judge today, some smaller demos and action, the streetparty/demo (2000+ people) and some arrests that were made during solidarity actions in Germany.ctrl+s 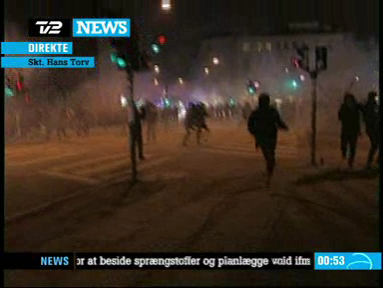 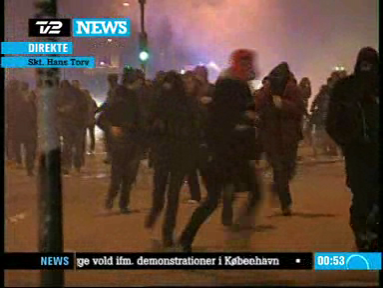 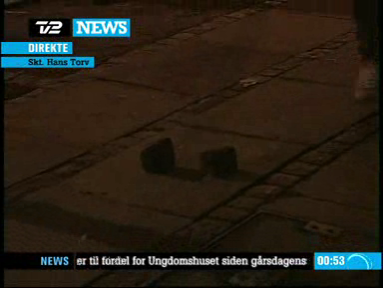 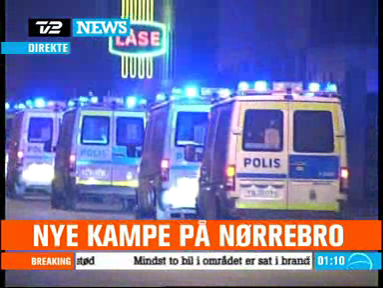 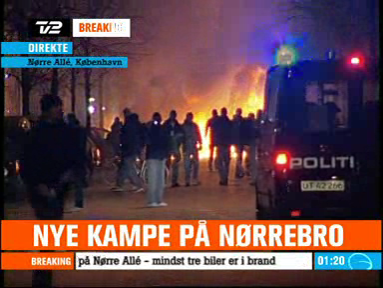 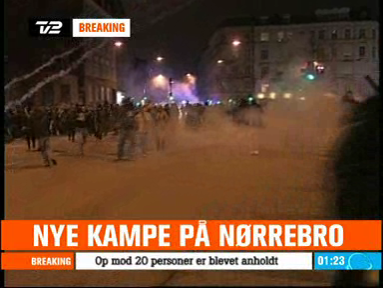 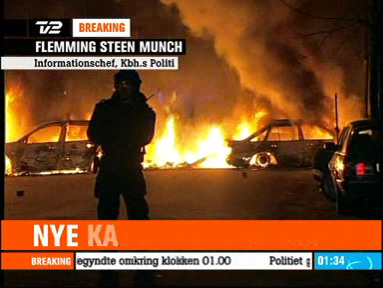 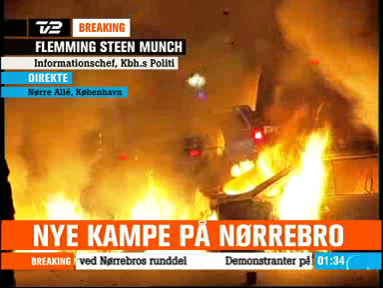 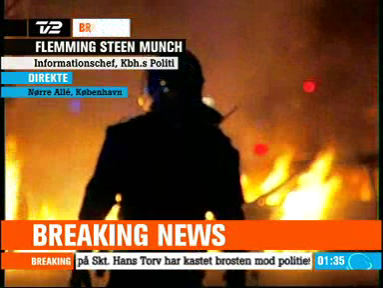 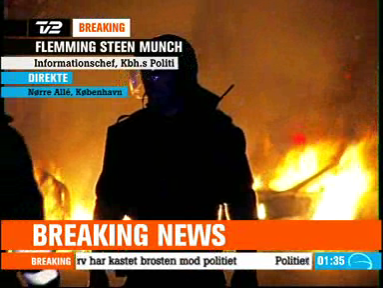 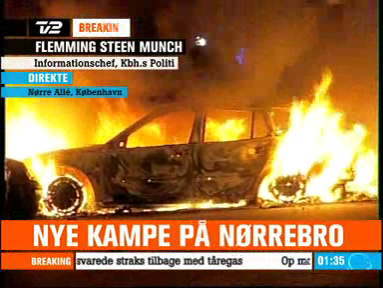 After the police despersed the streetparty tonight (Fri 2nd March) using teargas, riots started again with 5 cars on fire, one of them at least a policecar.