Weekend of Action Against Carmel Agrexco

The weekend of 10-11 February, 2007, saw two actions against Carmel-Agrexco, the largest exporter of flowers from illegal Israeli settlements in the West Bank. The lead up to Valentine's Day is one of their busiest times as their Middlesex depot delivers a large amount of Israeli flowers to UK supermarkets.

On Saturday, 120 Activists from the Boycott Israeli Goods Campaign blocked the gates of the depot for most of the afternoon. Then, in the early hours of Sunday morning, 13 activists shut the depot down again for several hours by locking themselves to the factory gates. 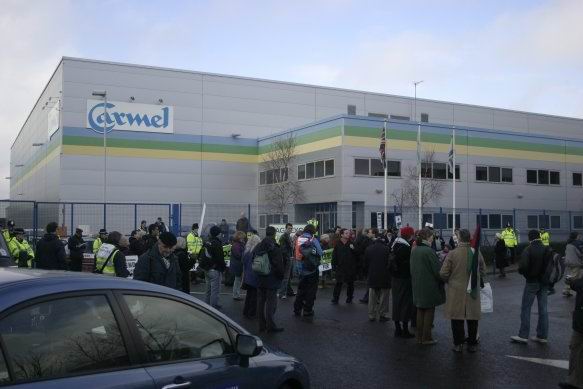 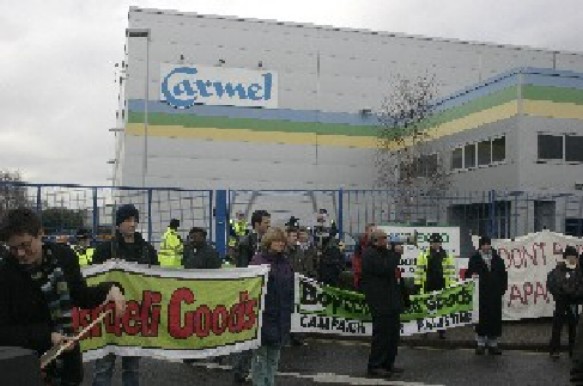 Agrexco is the largest exporter of settlement produce for sale overseas. In the UK, Agrexco is known under the Carmel, Coral and Jaffa brands. The UK is the most important foreign market for Israeli fresh produce. Agrexco exports a wide range of produce to the UK including peppers, tomatoes, strawberries, herbs, spices, flowers and avocadoes.

Previously there have been three blockades of this company stopping work at the factory. The company persistently refuses to press charges against the activists because they are scared of having to prove the legality of their business in open court.

This follows from actions of 11th November 2004, when Palestine-Solidarity protesters from London and Brighton were arrested after taking part in non-violent blockades outside the same company and 30 August 2006, when demonstrators blockaded the company for 11 hours and no arrests were made.

In September 2005, a Judge ruled that Agrexco (UK) must prove that their business is lawful. The acquittal of the seven activists before they were able to present their defence meant that the court did not have to rule on the legality of Agrexco-Carmel's involvement in the supply of produce from illegal settlements in the occupied West Bank and Gaza Strip.

In September 2006 protesters blockaded the company again, Carmel refused to have demonstrators arrested because this would have lead to another embarrassing court appearance where their business methods would have been investigated by a British court of law.