The public hanging of Saddam Hussein proves the point nicely. Bush intended to escalate violence so he could stay the course, splice and dice while stealing Iraq's resources. 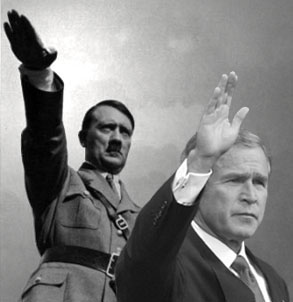 The International Community is supporting Americans against US War Criminal George Bush's war plan to increase militants in Iraq; warning America's credibility has been over for a long time......

US war criminal George W Bush has begun selling his bloody war plan to send more than 20,000 additional militants to Iraq. Most will go to Baghdad.

Their aim is to hold on to their occupation and their investment. The costs of the illegal and degrading war which include, crimes against humanity, resulting in the estimated deaths of 655,000 plus dead and over 3,000 US militants to secure oil in the region is a holocaust.

The International community have no confidence in the escalating violence and now by sending additional militants will only inflame violent tensions in the region even more.

The credibility of the United States was over in Iraq....along time ago!

The public hanging of Saddam Hussein proves the point nicely. Bush intended to escalate violence so he could stay the course, splice and dice while stealing Iraq's resources.

Allegedly the Democrat controlled US Congress is moving to scuttle the plan? We wait with baited breath...

Democrat Senator Carl Levin says the President does not have public support for the troop boost.

"It is a matter of he wants to plunge us deeper into this quagmire."

Even senior Republicans are opposing the plan.

The Association of Muslim Scholars is a Sunni group, allegedly linked to resistance groups.

It has warned the new American militants will face deadly resistance.

The group says the extra militants will fail to make a difference, just as the 40,000 militants they will be joining have failed.

It says that the militants will be killed, but will first kill twice as many innocent Iraqis.

Bobo, the British clown says the despotic approach by the US led Coalition of the Killing and Iraqi puppet government shows that they are determined to hold on to their investment in the oil rich region.

"Margaret Beckett, the British Foreign Minister's hopes that this joint effort will resolve the security situation, is a farce which is undermining efforts to end the occupation in Iraq, and will indeed fail to keep the peace," he said.

Bobo also says that UK militants are occupying British controlled Basra and they look like sending in more militants soon.

Meanwhile the Australian Community says there is an indication the US is planning to take action against Iran and Syria.

US militants stormed an Iranian consular office in the northern Iraqi Kurdish city of Arbil and arrested five people, including diplomats and staff, Iranian officials say.

While announcing his new holocaust to try to maintain power and the oil investments in Iraq, Bush accused the two countries of providing support for attacks on American occupiers within Iraq.

The Australian Community says the main focus is on peace and US hegemony in the oil rich region.

If that involves assisting - in particular - any Iranian, but also Syrian or Syrian-based support for resistance then me must stand by them.

That's to say the Americans appear to be preparing to take measures within Iran and within Syria, and I think that's undeniable.