THE EXPLOSION OF CORPORATE MERCENARIES 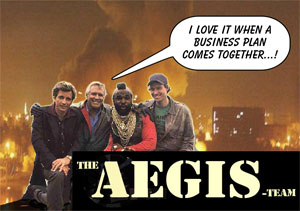 Who’s fielding the second biggest occupying force in Iraq, after the US? Nope; it’s not UK plc with its 7,000 troops. Not by a long way. It’s corporations! A recent report estimated that up to 50,000 private military and ‘security’ mercenaries are operating in Iraq, representing over 180 profit hungry corporations – the true ‘coalition of the willing’. As ever with the march of global capitalism, it’s a you-scratch-my-back, I’ll-lick-caviare-off-yours kind of deal and yet more evidence that ethics are a disposable irritant in the accumulation of hard cash.

The defeat in Vietnam, with a stream of all-american boys coming home in body bags forced the US elite into more covert ways of exerting imperial power. A switch to secret bombing campaigns and biological warfare against opponents didn’t prove too popular either. During the seventies and eighties the US mainly resorted to undercover ‘black ops’ or funding and training local militias to do their dirty work. Ronald Raygun used the secret £30million CIA ‘contingency fund’ to launch a war against the Sandinistas in Nicaragua and, like Papa Bush who followed him, bunged more than a few quid the way of the Bin Laden & Co of the Mujahadeen in Afghanistan. But big business could no longer rely on governments, struggling to deliver in the face of a disapproving democracy public, to secure control of resources and access to ‘markets’. With army recruitment at an all time low and a people used to easy living, conscription is politically impossible and the army just hasn’t seemed such a groovy or necessary lifestyle choice since slacking was invented in the sixties.

The suits had already persuaded their pals in government to hand over support functions like supplies, cooking, technology and transportation: so why not go the full hog? Pay us enough money, and we’ll take care of anything, no questions asked, no awkward media reports, no conscription or call-up of wide-eyed reservist farm boys: just chisel- jawed hardened ex-soldiers (often recruited from countries where life is cheaper), answerable to no-one but shareholders, willing to die if the reward for living is set high enough. It’s the ultimate outsourcing thrill.

Their arguments (and bribes) won out and corporations, now free to sell their violent capabilities to whomever they liked, expanded their customer base by getting stuck into Chechnya, Yugoslavia, Columbia and all over Africa. The real loot, though, was to be made by dealing with richest and most warlike countries, especially the US. As we know, the real rationale for war in Iraq wasn’t weapons, but business plans of mass destruction (see SchNEWS 462) - including those of the Private Military and Security Companies (PMSCs). In 2001 the top ten US private military firms spent more $32 million on lobbying, donating more than $12 million to political campaigns, three quarters of which lined the pockets of Bush’s Republicans. No wonder business is booming!

The donations were, of course, a good investment and companies were subsequently rewarded with massive contracts for the full scale Iraq’n’roll-out of privatised corporate warfare. Moving way beyond mere ‘ancillary’ support, they now carry out core tasks such as planning, intelligence, training, security in conflict zones, and actual combat (talk about making a killing!). Firms such as Blackwater, DynCorp International, and Vinelli Corporation have been raking in mega-millions while their employees (or their sub-sub contractors) are paid bounties far higher than regular soldiers wages, still subject to the budget-scrutinising, PR image-controlling discipline of a national army.

Empowered by the military might of the US State, but not part of it, they are free to run around Iraq, armed and dangerous, answerable to no one. Their deaths go largely uncounted and under-reported, but were estimated at over 480 by May 2006. Their many excesses, evident from examples of leaked videos showing them randomly shooting Iraqi civilians or abusing prisoners, go unpunished. (It was private privates having all the ‘fun’ at Abu Grahib.) In fact, not one of the many thousands of mercs who’ve done a tour of duty-free in Iraq has ever been convicted of a crime. Which is just, of course, how corporations always like to operate.

And where Yankees lead, naturally, plucky Brit wannabes soon follow. Part of the reason the UK government was so willing to ‘go all the way’ with the US on Iraq (well, it wasn’t exactly a first date!) was precisely to make sure its companies could secure their place at the frenzied feeding trough. In 2003, British PMSCs had a annual turnover of £320 million. Now that figure stands at £1.8 billion. In that same period, Aegis Defense Services - the UK’s largest ‘service provider’ - jumped from a revenue of just £500,000 to a trigger-happy £62 million – three quarters of which is comes from Iraq.

Aegis now coordinates the operations of all PMSCs working in Iraq, including handling security at prisons and oil fields. Aegis is led by Lt-Col Tim Spicer - better known as the former boss of Sandline International, Spicer involved himself in embargo breaking arms deals to Sierra Leone and attempted to suppress an uprising in Papua New Guinea on behalf of Rio Tinto Zinc.(see SchNEWS 481).

Given all the complaints that the government tie businesses up in red tape, you’d be forgiven for thinking that there’d be tight government regulation of PMSCs, attempting to reign in their lack of accountability. However if you want to run a private war, there’s less hoops to jump through than if you wanted to run a party in a nightclub (or have a demo, for that matter).

Laws covering mercenaries date back to 1870, and despite belatedly producing a green paper in 2002, following one media scandal too many, Tony Bliar and pals have done nothing to actually introduce any regulations. The US and UK appear to have been more than happy to take advantage of the unofficial soldiers, utilising them to run some illicit arms here, do a bit of torture there, perhaps destabilising a country or two along the way. The only downside seems to be not being able to recruit and maintain regular soldiers any more – the government was forced to announce extra bonuses for those serving in Iraq recently, in an attempt to stave off defections to the private sector.

As the political tide shifts and both the US and UK begin to make noises about withdrawing from Iraq, don’t expect their cash to stop flowing to the hired goons they leave behind to fight the next phase of their war.

** To read more, and the source of many of the factual snippits blatantly ‘liberated’ for this article, see the excellent Corporate Mercenaries report published by, and available at www.waronwant.org

For the rest of this weeks issue including articles on Faslane, Venezuela and more check out

This is the last SchNEWS of the year, SchNEWS Towers is moving to a cheaper premises in India. Back in '07 though, Honest!