SOCPA - brian haw arrested and some of his display removed overnight

a woman attacked brian haw's parliament square display at about 5.15 this morning. but brian himself was arrested under the public order act, in an organised police swoop, over the content of the display. it is unclear if the woman was arrested. one of brian's supporters was actively prevented from taking photographs of her. 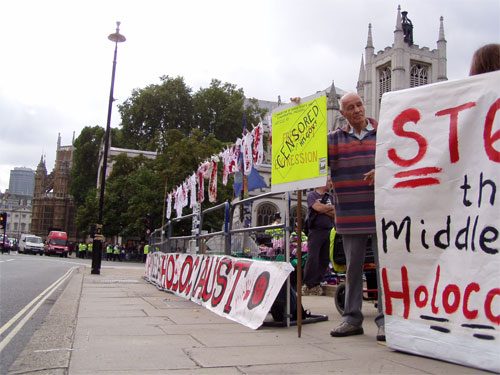 at around 5.15 this morning, a woman approached brian haw's protest display and attempted to destroy part of it. she grabbed one of the green collapsible chairs and was waving it around, trying to demolish the washing line of bloodied baby clothes that was erected a week ago in front of his small placard. within minutes of her attack, there was a surprisingly large and efficient police response, and although the woman was apprehended it is unclear whether she was arrested. what is clear though, is that police threatened one of brian's supporters with arrest for trying to take a photograph of the woman while police were blocking the sight-line. and brian himself was arrested under section 4b of the public order act for 'displaying writing, a sign or other visible representation which is threatening, abusive or insulting, thereby causing another person harassment, alarm, or distress'.

brian was taken to belgravia police station and police took the 'offending' display away too.


there are several suspicious elements to this story

within minutes of the early morning incident, police arrived in three vans and two cars. this large entourage was also accompanied by several community support officers on foot, as well as several sergeants and an inspector! was the rest of charing cross crime-free at that time on a friday night/saturday morning?

the woman had grabbed a collapsible green chair that brian uses, and was waving it around while trying to trash the display. officers have removed the washing line as 'evidence' but have not removed the green chair.

although it was police from belgravia that effected brian's arrest, they were in charing cross vehicles.

belgravia station is not responding to requests from supporters for information, claiming that they do not open until 7am.

in one phone-call to the station, brian was heard in the background shouting that they weren't letting him phone his solicitor - at this point the receptionist hung up.

since police have brian's details already, any arrest under 4(b) wouldn't normally require continued detention, and it has been shown in court previously that photographs (which the police took) are sufficient evidence in these sort of cases. the seizure of the 'offending' items appears legally unnecessary.

attached is audio of an exchange between barbara tucker and police recorded earlier - you can hear the policeman saying 'fuck off' about 52" into the clip.

brian is still held at belgravia - his supporters have been told that he has spoken to his lawyers, but the lawyers have not confirmed that yet, so there is some doubt.

police are playing down the woman's offence, but it has now emerged that she was attempting to tear down the picasso 'peace' sign and the amnesty international 'stop torture, protect humans' sign - are police going to claim that these are offensive too?

in another example of 'guilty until proven innocent' and a small rerun of the 23rd may, police have gone ahead and used force to confiscate part of brian's display, telling him to argue it out in court later - as the policeman puts it when asked why he is taking the baby clothes "discuss that with the courts".

brian is still held at belgravia. there are unconfirmed reports that the woman was released after being cautioned, but other reports suggest she may still be in custody. i'll try to clarify this later.

the duty officer at the police station stated that brian's release was imminent, but that was nearly an hour ago.

police say the reason brian was taken to belgravia was because they were the first officers on the scene, but they were in charing cross vehicles.

brian was finally released at 11.15. he has been told he is on bail for a public order offence.

meanwhile the custody sergeant has confirmed that the woman who attacked the display has been released after being cautioned.

Not the first agent provocateur of course. 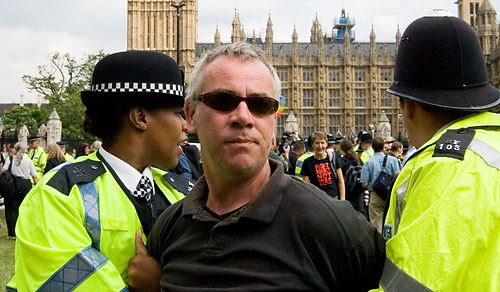 The mystery man remains a mystery.

Readers with a longish memory will remember a similar situation where police arrested six people in Parliament Square, yet only four came to court (one was excused due to terminal illness). The sixth is widely believed to have been an agent provocateur, for despite his picture and an appeal for information having appears on blogs ever since, he has never been identified.

This was on the first day that SOCPA came in to force and it was this mystery man's jostling that caused the police to come forward and start arrests. 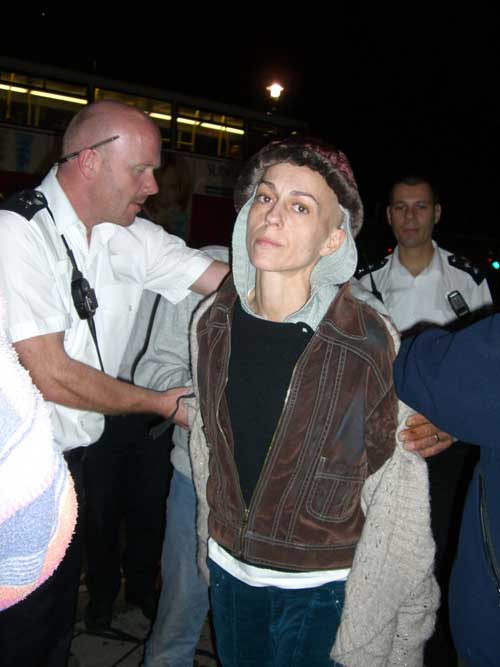 this is a picture of brian's attacker.

despite the fact that this woman was waving a chair around, committed criminal damage, and apparently was so distressed by brian's display that police felt it necessary to arrest him, she was let off with jsut a caution.

strangers in the night!