i have been covering the issues around the 'serious organised crime and police act' for some time. what i saw on sunday afternoon sickened me. 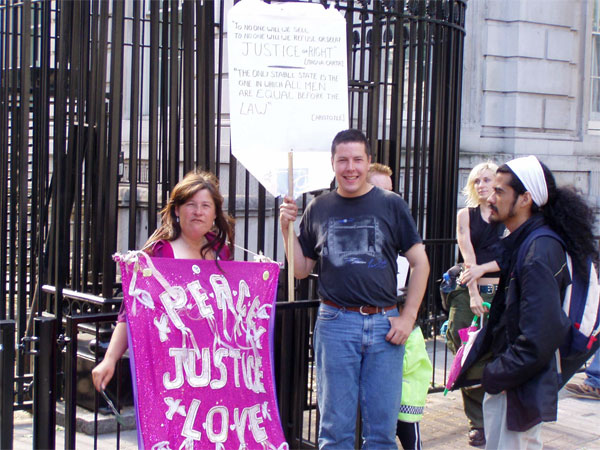 is this a demo? 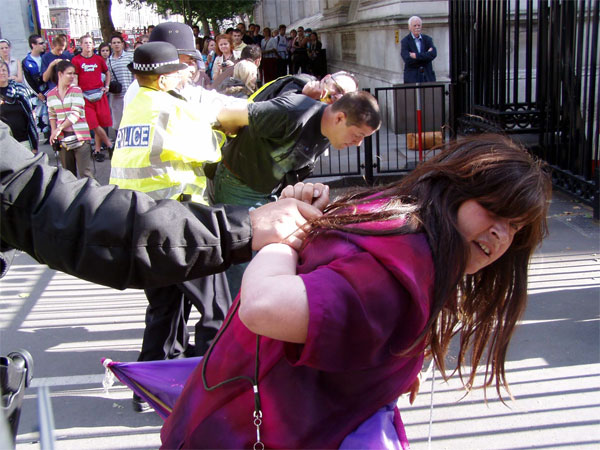 is this a legitimate response?

two peaceful activists challenged the serious organised crime and police act outside downing street on a quiet sunday afternoon at around 5pm. section 132 of the act, thought to have been drafted in order to rid parliament square of the five-year peace vigil by brian haw, bans demonstrations within 1 km of parliament unless given prior authorisation by the police. steve jago, a management accountant, and barbara tucker, a care worker and mother, stood outside the gates of downing street with banners. but it is unclear whether this was a demonstration as meant by the act.

barbara's banner simply stated "peace, justice, love for all", while steve's was a plain white banner containing a quote from the magna carta - "to no-one will we sell, to no-one will we refuse or delay justice or right", and aristotle's "the only stable state is the one in which all men are equal before the law".

it was enough for a policewoman to inquire what they were doing and although she accepted that barbara was not protesting, she decided that steve was. he refused to give his details when asked, as the officer had not adequately explained why she needed them. she also asked them to both move on without stating what law required them to do so.

as both barbara and steve had recently had a meeting at charing cross station with senior officers chief inspector robinson and superintendent terry, they referred her to them and suggested she contact her station to verify steve's details.

the policewoman then told steve that he would be arrested, and although he offered no resistance, she decided she was going to try to handcuff him. he was not happy about this - feeling that holding a banner with quotations on it is clearly not an arrestable offence, and certainly not one requiring handcuffs. while remaining calm and passive, steve tried to avoid being handcuffed. by now, two more police cars had arrived, and along with armed motorcycle police, the officers violently attacked both steve and barbara, and in front of a horrified crowd of passers-by, they struggled to handcuff steve, and pushed barbara against the hard metal railings of downing street with her arm twisted behind her back.

this journalist was obstructed from taking photographs and video by several officers despite loudly reminding them of their code of conduct towards journalists. i guess the only explanation is they were trying to hide what they were doing.

steve remained outside the station for some time with his hands handcuffed tightly behind him. after a while, he was transferred to another van, and was held in this state without processing or charge for more than an hour, during which time he heard screams of pain coming from barbara tucker in the police station.

near 7.30, he was finally taken into the custody suite for processing, but extraordinarily, after all this, the police refused to charge him for anything, instead, telling him that he would be 'reported' to the crown prosecution service for possible summons for an 'unauthorised protest' under section 132. he pointed out that the law refers to demonstration not protest, but they wouldn't even change their wording - it seems highly unlikely he will hear any more about this. barbara meanwhile was interviewed, after being charged with assaulting first one officer, and then later a second. there were no charges about any protest, and she was finally released near midnight on bail to return next saturday. she expects cctv footage to completely exonerate her.

both activists are expected to make the fullest possible complaints about the police action today. steve's treatment in the vans amounted to torture, and his release with no charge vindicates him completely.

they are both quite bruised, scratched and very shaken as well as being extremely angry at their treatment.

this is a ridiculous and repressive law and the police continually enforce it in an arbitrary and heavy-handed way.


(btw, in case you're too stupid to work it out for yourself, i'm an anti-capitalist - therefore, no capitals - simple really!)

remember to check the socpa feature in the central collumn

there's more news, with links to previous stories and features, on the socpa feature in the central collumn at 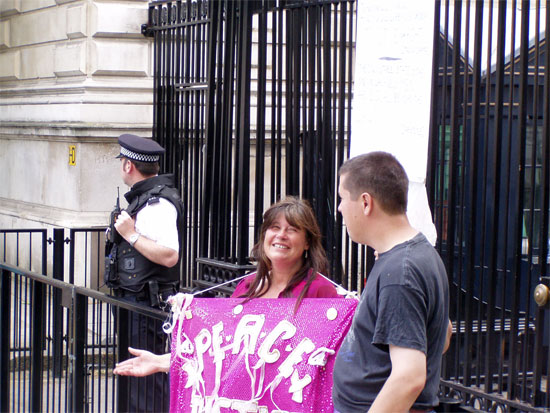 enjoying a chat in the sunshine 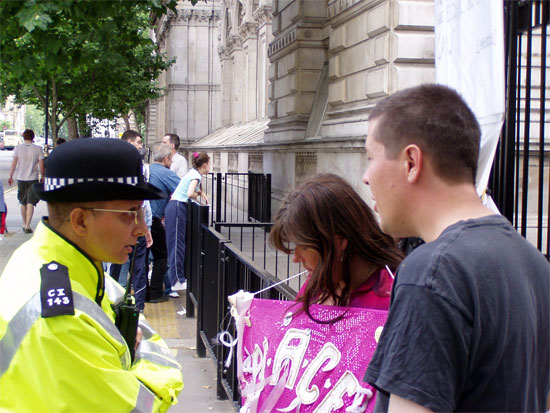 same police officer who let off the institute of director demonstrators 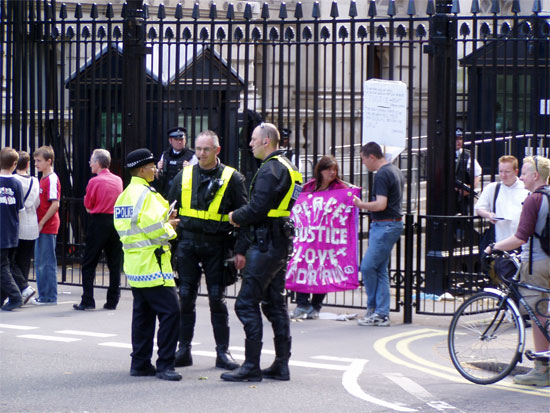 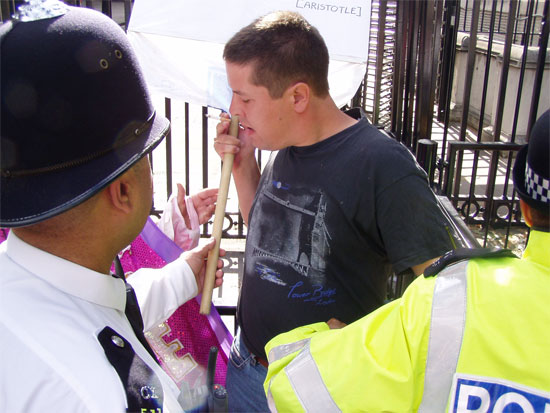 officers move in to arrest 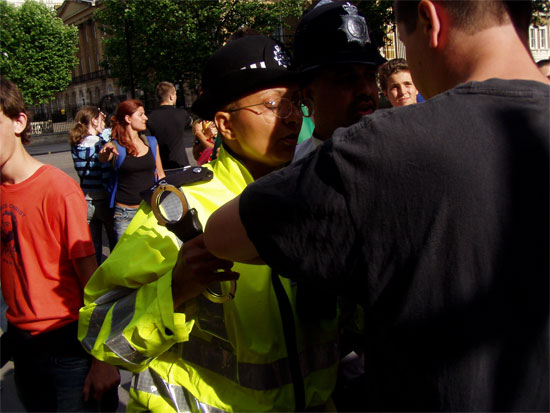 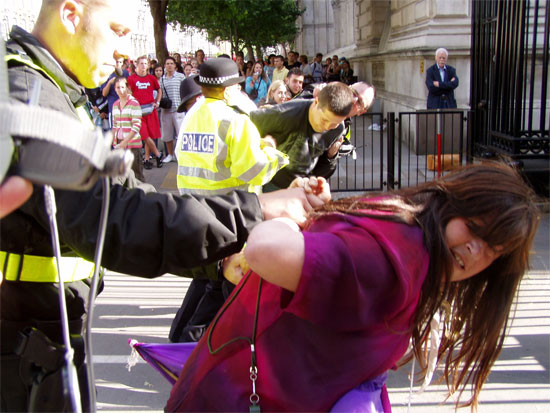 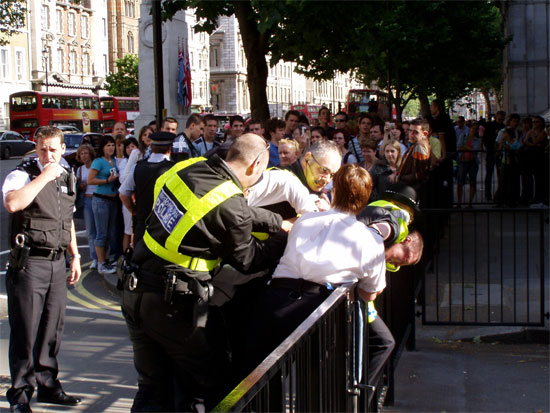 how many cops does it take? the guy was just holding a banner!! 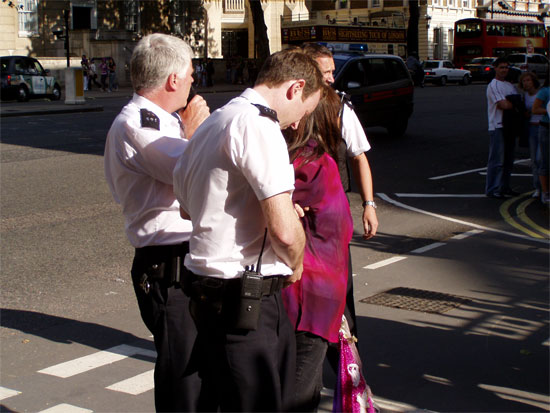 barbara being dragged away 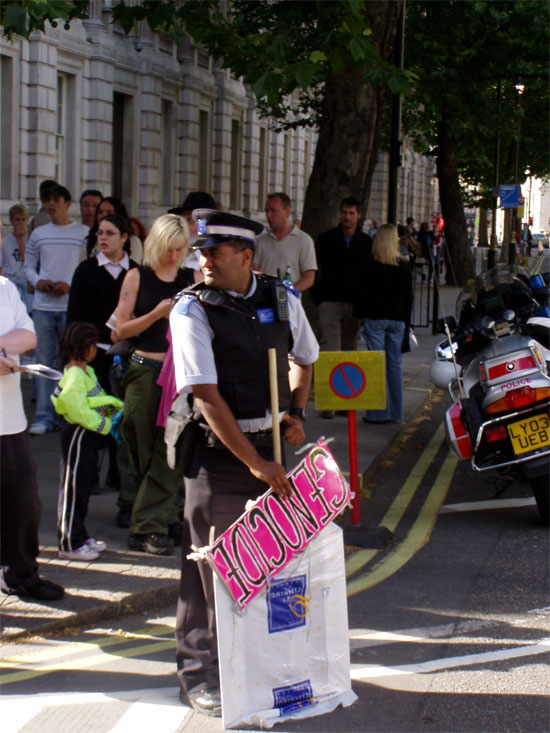 in reply to simon, i was shocked too. there were no other journalists there at the time, but i was up till 3.30am doing press releases to all the major newspapers, with the first two photos you saw, and not one of them have picked up on it. i can't understand that they think this is not important.

later on that same sunday evening, another farcical incident. a young woman, 'charity sweet' who can often be seen singing in parliament square, decided to take her voice to outside downing street. she was harassed at one point by five policemen, and she was issued with a stop and search form, which clearly stated the reason for the intervention as 'singing loudly'.

at least she wasn't beaten up!

New Labour changes to the law that appear to allow this!

These SOPCA additions are a fundamental change to the laws of this country and by taking away the long established concept of arrestable offences you can for example now be arrested to allow an investigation of your conduct ! i.e offence not required !
We are now firmly in Police state territory and what happened to Steve and Barbara is why these laws should never have been enacted
see below

For police officers, one or more of the following criteria now have to be fulfilled before an arrest can be made.

These changes were enacted on 1 January 2006.