inspector hart from charing cross threatened a mother today that she would be arrested and that her seven-year-old daughter would be taken to the police station and handed over to social services. her crime? singing outside downing street with a statement about bullying round her neck.

this week's stop and search notification 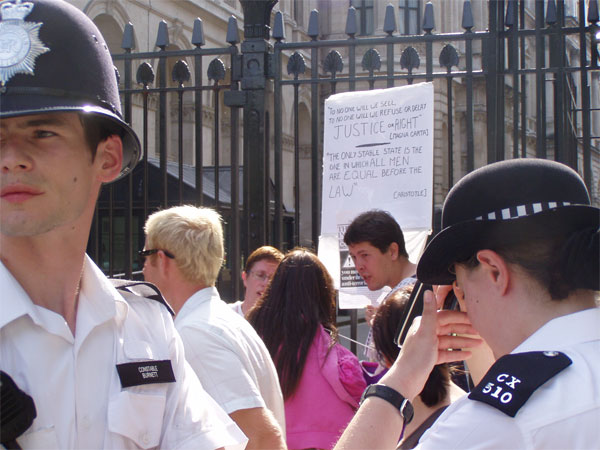 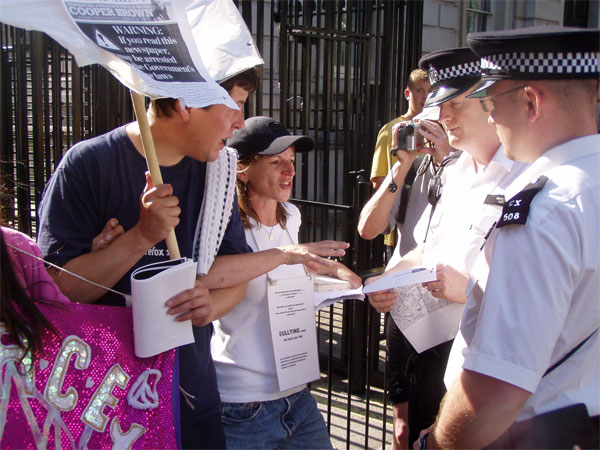 on a sunny sunday afternoon, eleven police attended the scene when 'barbara tucker' (who HAS notified police of her ongoing demonstration) stood outside downing street with 'stephen jago' (who was front page news in 'the independent' newspaper this week for being arrested with copies of henry porter's 'vanity fair' civil rights article on him), and mother 'charity sweet', (who was also in 'the independent' after being stopped and searched for reading said newspaper outside downing street).

they sang some songs and steve had a banner with appropriate quotes written on it: 'to no one will we sell, to no one will we refuse or delay, justice or right' - magna carta, and 'the only stable state is the one in which all men are equal before the law' - aristotle. his banner also had 'the independent' front page attached to it.

after being asked to move by the gate police, more and more police began to turn up, taking notes on the banner quotes, and discussing tactics for a long while. eventually, inspector hart arrived. and the by now eleven police had a final conflab before moving in. barbara tucker and steve jago were both told they were being 'reported' to the crown prosecution service for possible summons for holding an 'unauthorised' demo in the socpa designated area.

barbara began blowing a whistle and shouting that she HAD notified the police of her ongoing protest, and that by law they MUST authorise her demonstration. she claimed that since inspector hart personally knew this, he must be corrupt. he warned her not to make such allegations publicly, but she offered to defend them in court.

inspector hart also talked to 'charity sweet' and warned that she faced arrest, although it is not clear that she was 'reported'. she told him she had her seven year old daughter with her and asked what on earth would happen if she were arrested. he told her the child would be taken too, and handed over to the care of social services at the police station. fearing for her child under such intimidation, she gave up her protest, and the crowd that had gathered shouted out 'shame' at the now uncomfortable inspector.

the police then retreated for more discussion, inspector hart warned again that barbara and steve would be arrested if they didn't leave. his question 'are you going to stop?' was met with a 'no'. the police talked more, then rather lamely, he came over one last time to say that they might be arrested later if they continue.

all eleven police got in their car, their van, and on their bicycles, and they beat a retreat, leaving the demonstration to continue.

barbara tucker has now been 'reported' more than thirty times, and has only recived one summons. as she pointed out, the summons relates to the 17th may when she made a complaint of assault to the police, and was told that if she pursued the complaint, the police would issue a socpa summons against her in return.

although today was clearly a victory for the protestors, it is worrying that this level of intimidation goes on, and it may have only been the presence of several cameras that ensured the peaceful conclusion.

this law must go!