'Die-In' at Nottingham University to protest at un-ethical investments

Students of the Nottingham Student Peace Movement held a die-in on May 9 to protest at the University's lack of progress in switching its investments to funds that are ethically managed. 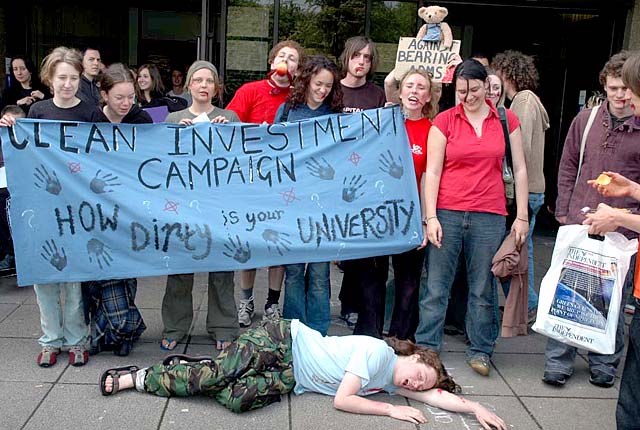 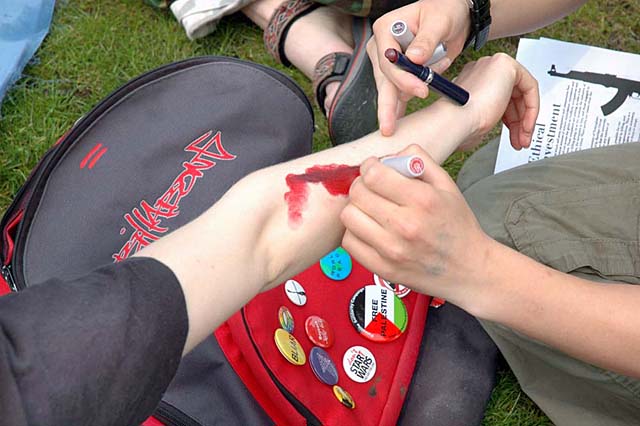 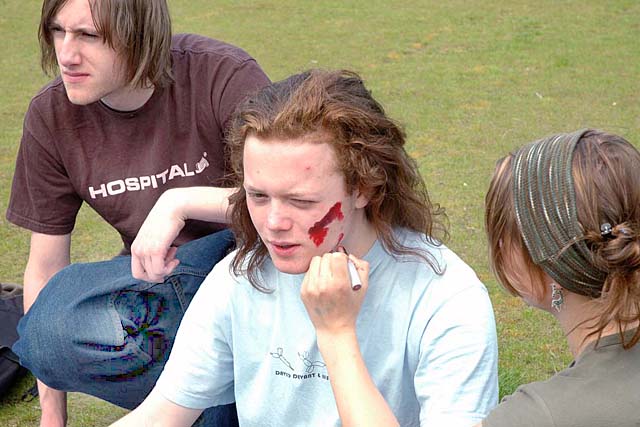 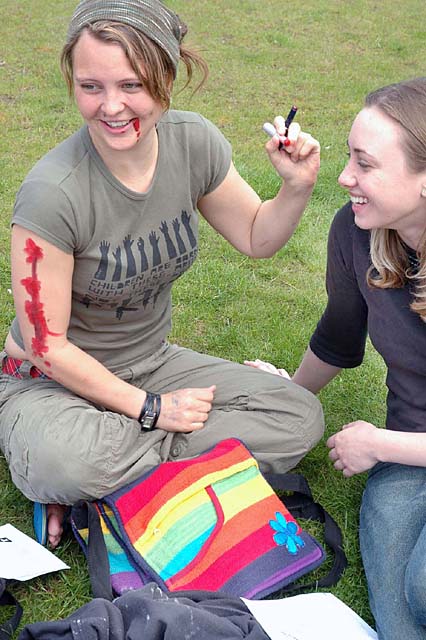 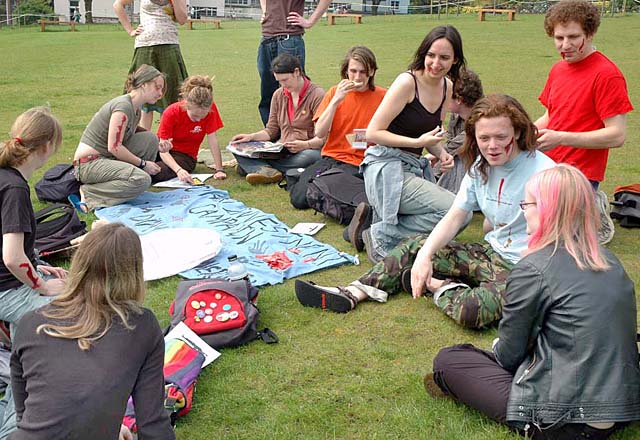 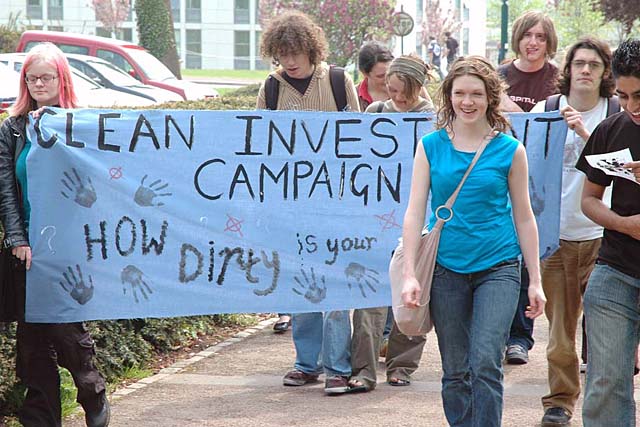 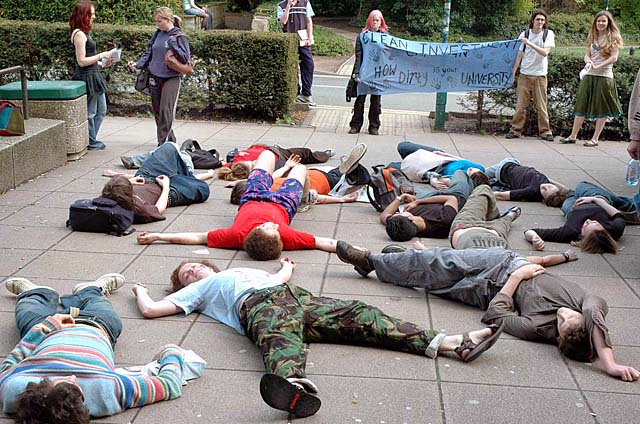 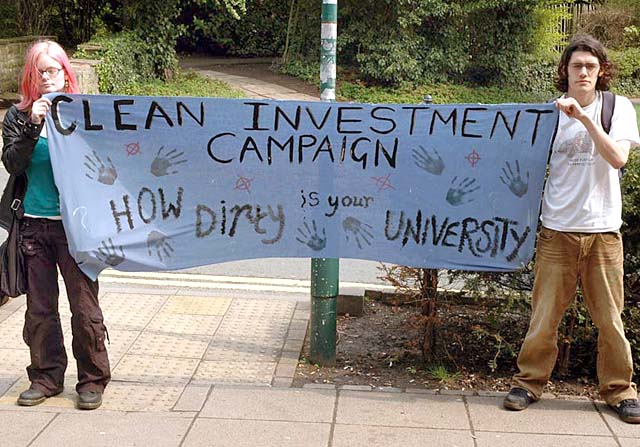 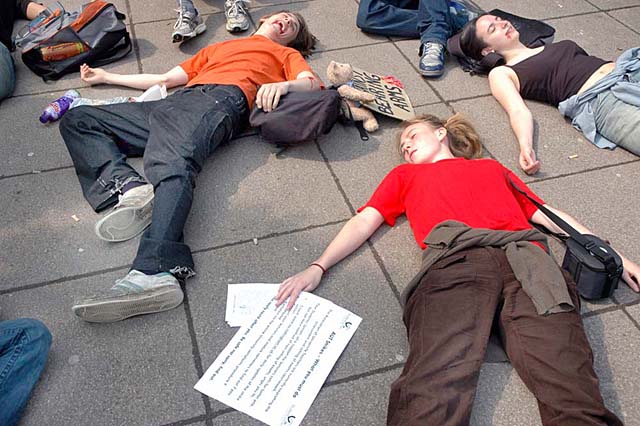 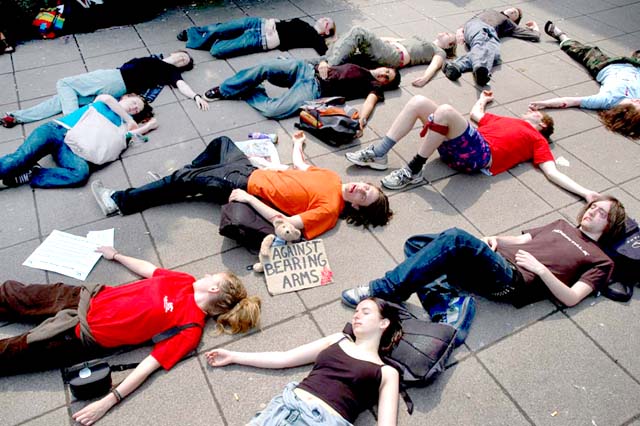 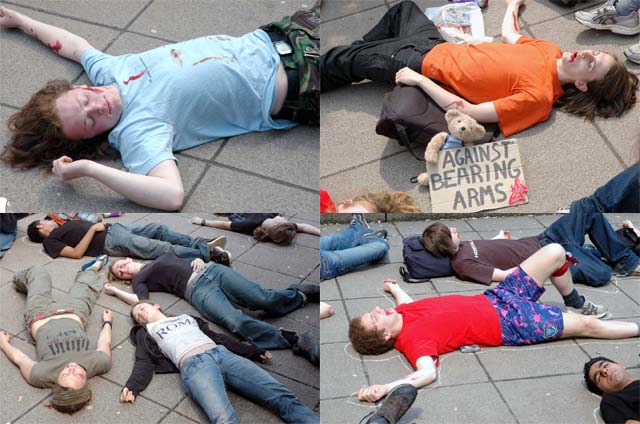 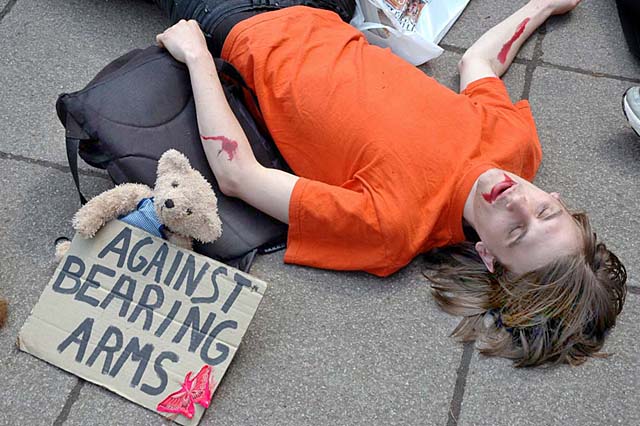 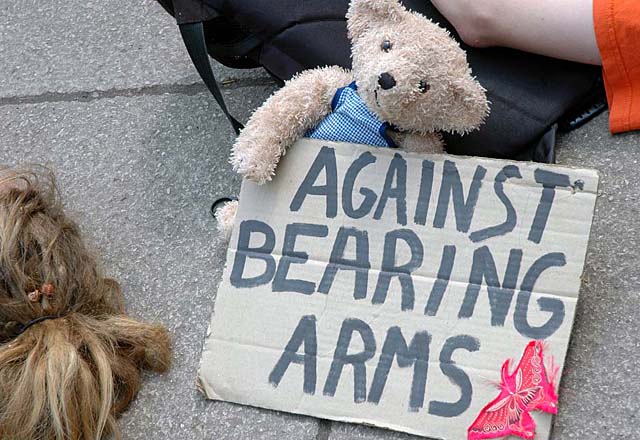 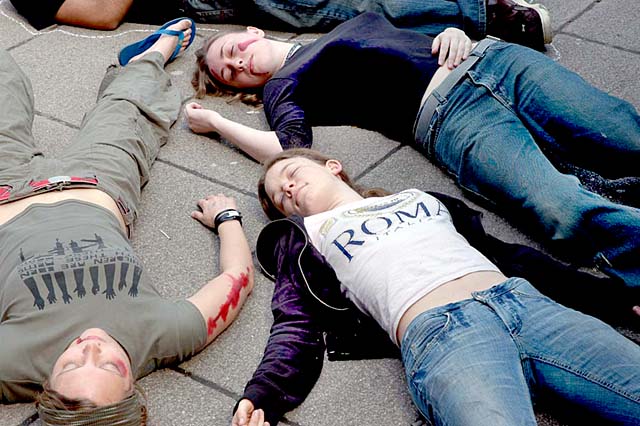 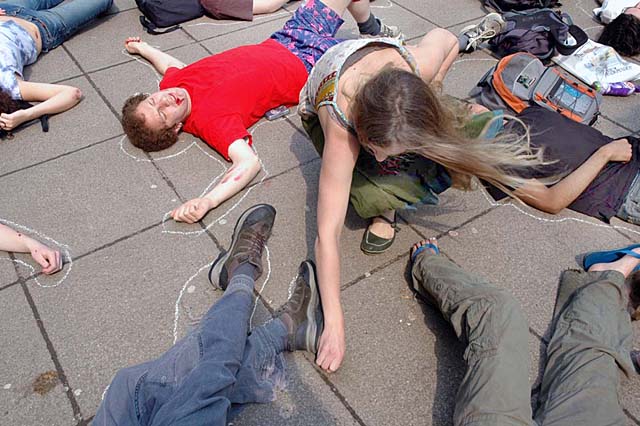 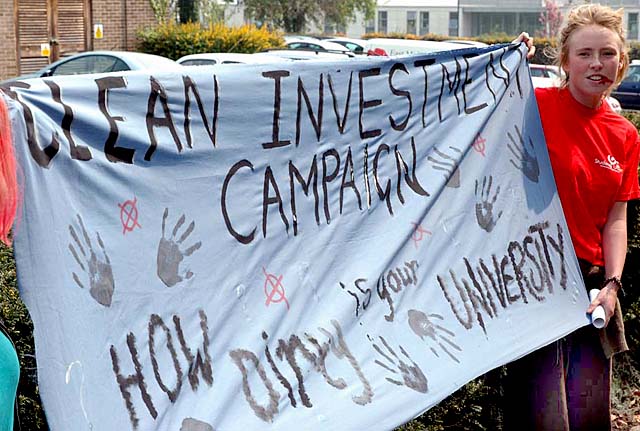 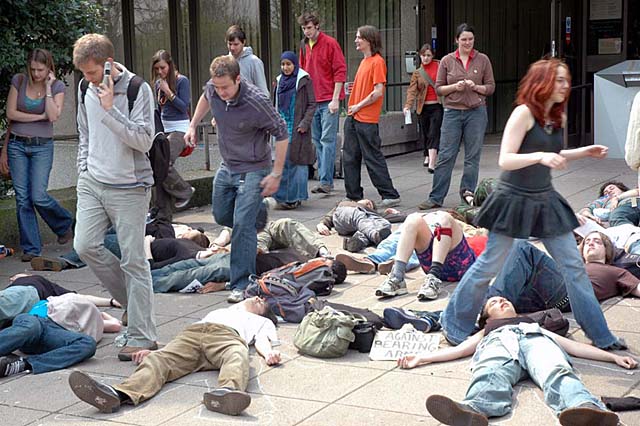 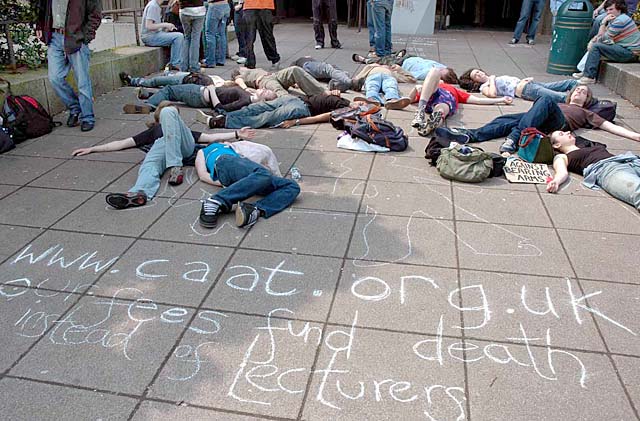 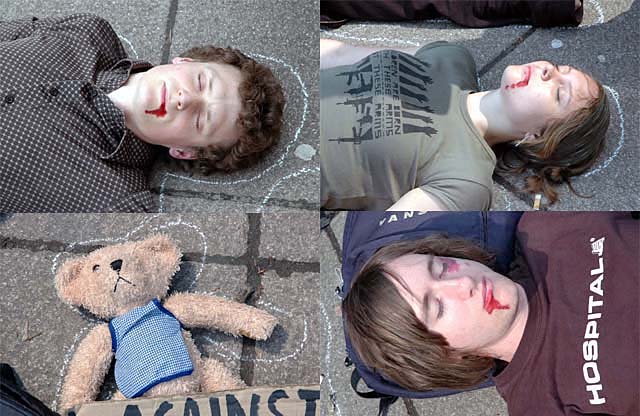 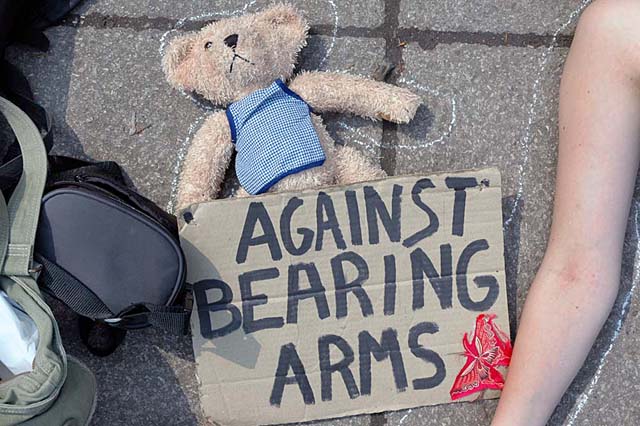 'Die-In' at Nottingham University to protest at un-ethical investments

Students of the Nottingham Student Peace Movement held a die-in on May 9 to protest at the University's lack of progress in switching its investments to funds that are ethically managed.

The event - outside Hallward Library, University Campus - twinned this issue to the ongoing campaigns against the commodification of education and in solidarity with the AUT.

It seems outrageous that the University is willing to invest in arms but not their staff. It is equally unpalatable that, whilst the University profits from the sale of arms, students must pay large sums of money to get an education.

They raised awareness and distributed information about the University's investments in the arms trade.

There wasn't as much blood as I would have liked! Tomato ketchup and lipstick. I think a better 'gore mix' would be nice, plase add recepies in the comments. 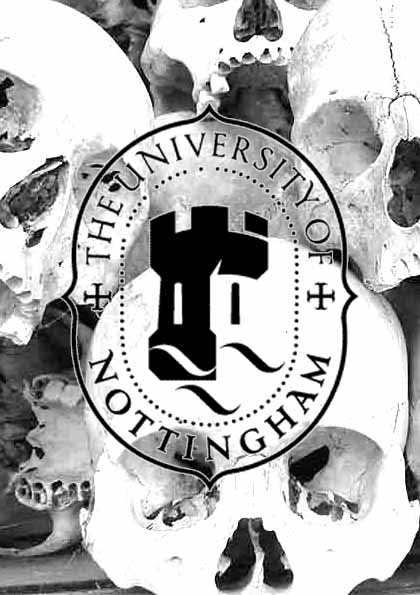 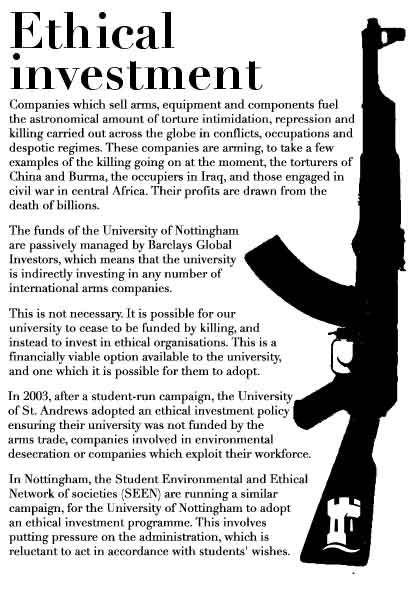 Included is the flyers we were handing out and further information about the campaign.

Students of the Nottingham Student Peace Movement have decided to hold a die-in on Tuesday 9th May, outside the Hallward Library, in protest against the University's lack of progress in switching its investments to funds that are ethically managed. We are hoping to tie this issue into the ongoing campaigns against the commodification of education and in solidarity with the AUT. It seems outrageous that the University is willing to invest in arms but not their staff. It is equally unpalatable that, whilst the University profits from the sale of arms, students must pay large sums of money to get an education.

For a Free Education

This is a time of radical change in education. With the introduction of fees and now top-up fees, access to higher education has become stratified, dividing potential students into those who can afford it and those whose financial insecurity excludes them. This is accompanied by a general trend in universities towards a business-oriented model of education, where students are reduced to passive consumers of training for their future roles as battery workers. There is an increasing involvement of private companies in the funding of research, in return for prime opportunities to recruit students. Meanwhile, markets in student services are being opened up so that we can be exploited wherever we go, by food vendors, increased advertising, privatisation of student accommodation, etc. With this approach to education any source of funding is fair game, regardless of the ethical and ecological consequences, hence Nottingham’s acceptance of millions of pounds from British American Tobacco to fund an MBA in corporate social responsibility, sponsorship of research by human rights abusers Rolls-Royce and Shell, and the ubiquity of Coca-Cola vending machines and Nestlé water in the water coolers.

“Top-up” fees and the AUT dispute
What is unknown to many students is that “top-up” fees go directly to the universities themselves. They are not a form of indirect taxation, but direct funding to the institutions who lobbied for them, under the auspices of increasing pay for staff. Since then the universities have reneged on this offer, despite the increasing workload and relative pay cuts endured by academic staff1. As a result, staff members are understandably aggrieved and want to take action against their exploitation, hence the strikes seen earlier this year. However, many AUT members, whilst wishing to take action against their employers, are not in favour of the tactics of boycotting student assessment, because they damage students rather than the university. Rather than judging the legitimacy of staff claims for better pay and conditions based upon the AUT’s questionable choice of tactics, students would do well to consider the past behaviour of university management, especially considering Nottingham’s scandalous behaviour leading to the University’s greylisting by the AUT in 20042. Then, the University imposed performance-related pay and refused to negotiate with the union. All of this continues whilst Nottingham’s Vice-Chancellor, Sir Colin Campbell, was revealed to have received a 23% pay rise in 2004-5, bringing his salary to a total of £221,0003. The parallels with corporate fat cats are hard to avoid. The University’s staff, as well as its students, are being damaged by the business model being ruthlessly imposed, and linking our two campaigns could strengthen them both.

What can you do?
Education could be a chance for students to learn to think critically and to question the inevitability of a career path. With government funding (perhaps diverted from the massive budgets for maintaining the occupations of Afghanistan and Iraq, subsidising the arms trade, and developing tactical nuclear weapons) this education could be made free, thus avoiding the reliance on big business for extra cash, and ending their stranglehold on our education.
However, appeals to the government or the University are unlikely to be listened to. The lack of progress of campaigns requesting the transfer of the University’s investments to ethically-managed portfolios4, and to banish Coca-Cola from campus, have failed to make an impact on University management. Likewise, we are unlikely to be supported by our NUS executive, which has failed to show collective solidarity with student and staff struggles. Indeed, many NUS exec members embody the unthinking careerism that we are struggling to avoid.
It seems that the most effective action will come from us, the students, directly. We need to challenge those who would support corporate involvement in our education, within our departments and at the level of University management. By increasing our fellow students’ awareness about the companies that exploit people and environment, we can build movements against their presence on campus. We could form unions of rent-payers, to ensure that landlords are requesting reasonable amounts, boycott corporate vending machines in favour of home-grown lunches, provide information on the few remaining free spaces in the city. Who knows, we could even occupy the Vice-Chancellor’s office, a library building, or our classrooms, and start providing our own education. The struggle for free education is about to begin…

http://www.free-education.org.uk – Education Not For Sale


Clean Investment - The Campaign so far
Since September 2005 NSPM has been making steps towards a campaign for ethical investment at the university, concentrating on investment in the arms exporting companies singled-out by Campaign Against the Arms Trade (CAAT). These companies make a profit through the sale of equipment and components used to kill, intimidate, destroy and torture. These profit then profit the companies' shareholders, essentially allowing them to make money out of war. We feel very strongly that the institution's (and, indirectly, its students') money should not be invested in such activities.

The university had not previously responded to CAAT's requests for emails regarding its investments, so a student member of NSPM contacted Director of Finance Martin Wynne-Jones, to ask for the information. Even when the Freedom of Information Act 2000 was mentioned in the request, no reply came. We decided to widen the issue and involved members of the Student Environmental & Ethics Network (SEEN), resulting in a large number of emails and letters being sent to Mr Wynne-Jones. This had the desired effect of persuading him to release the information. You can see the email that he sent in reply here.

It appears from the email that the university has passively managed accounts with Barclays Global Investors, which according to CAAT means that there is likely to be no control over which companies are invested in. This could mean that the university is indirectly investing in any number of international arms companies. CAAT's very useful email can be read here.

Our next step will be to ascertain whether the university's investments are of the nature described above, and if so, whether we can campaign for an ethical investment policy to be adopted by the university, to reflect the concerns of students. We will also attempt to take the information that we now have and use it to raise the awareness of students about our university's investments and the need for positive change. We have already begun this step with our "speech bubble" campaign (see photos). We also intend to collaborate with other societies campaigning for different aspects of ethical investment (e.g. environmental, human rights). To sign the petition asking for ethical investment go here.

Also, have a look at the Environment & Social Justice site to find out more about ethical investment at the university in general.

For an excellent site on a similar campaign, see St. Andrews' Ethical Investment Campaign. For an example of a draft motion on ethical investment, see York People & Planet's.

Recent news
University of Nottingham profits from the "reconstruction" of Iraq. See the Corporate Watch page for more info.