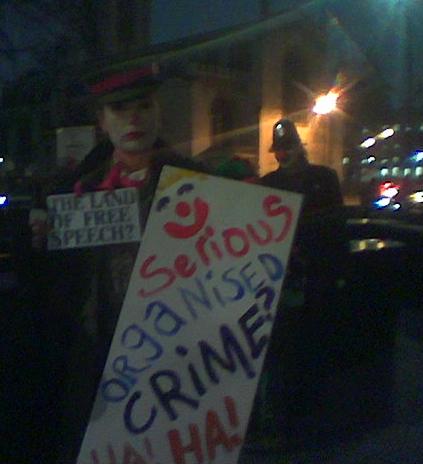 The rebel clowns[1] and many others had spent the day at Bow Street Magistrates court expressing solidarity with five defendants who had been charged under the Serious Organised Crime and Police Act 132 (SOCPA 2005). The bill, for those who don't know, outlaws all "demonstration without authorisation" within 1Km of parliament. These five defendants had had the audacity to hold signs reading “We have the Right To Protest.” The magistrate must have thought they were very clearly Serious Organised Criminals indeed - because she found them all GUILTY.

We Rebel Clowns grew up on a diet of gangster movies and had always thought that in order to be considered a Serious Organised Criminal we’d have to get into the UK Government - a prospect that was way too scary, even for us! But then after witnessing the court hearing, it dawned on us that it was actually a lot easier (and a lot more fun) to become a Serious Organised Criminal than we had previously realised.

Our first port of call was to visit our MPs in the House Of Commons. Just through the security gate and whoa – the duty sergeant stopped us from going in. Alas, we were deemed ‘not dignified enough’ by a copper calling himself the ‘chief arbiter of style’. Apparently fashion is no joke in the house of parliament and despite Poppins being in her best dress uniform and all, we were all refused entry. ‘Not dignified enough?’ Well I never! Do we think that the police, who are going to be lobbying their MPs today, no doubt in dress uniform, will meet with the same sartorial discrimination???!

Armed with a delicious cake baked and iced by the wondrous Mary Poppins and a banner reading “Serious Organised Crime? Ha Ha Ha!” we hapless Rebel Clowns made our way across the road to Parliament Square where they quickly aroused the attention of the ever-alert /cluster in flouro/. All eyes were on us!

When the coppers turned up, they thrust sheets of paper at us, which initiated this dialogue:

Cop: Read this. It is in your best interest to read this.

Caesar Buttocks: It’s in your best interest to read this! (points to
“Serious Organised Crime? Ha Ha Ha!” placard being held by him and Commodore Koogie)

Cop: It is illegal to demonstrate here. Are you demonstrating?

Marshall Darkness: Does it look like we are demonstrating?

(cops don’t respond. Unsure of what to do, they talk to each other for 2 minutes before speeding off, leaving us there with placard in hand.)

It seems police are becoming much more reluctant to be used as the pet pawns of the politicians who legislated SOCPA 132. The day before our visit, cops had refused to arrest[2] Gary who was holding a banner reading “Parliament Square belongs to the people". Gary was told by the copper who came to speak with him that his banner was “not a protest, it's a statement of fact".

The empty SOCPA 132 actually makes it illegal to hold a “demonstration” in the zone without “police approval.” A large number of concerned people had recently tested the dubious wording of the legislation by holding many demonstrations[vid @ 3]. Whilst some folk “demonstrated” how to swing poi, others used a banner to demonstrate how to lie down, how to do a roly poly, how to ice a cake and how to peel a banana. All of these brave demonstrators on the 22nd luckily escaped arrest and the
actual definition of “demonstration” remains untested in a court of law.

The legislation itself is unwieldy, vague, irrelevant, devoid of all
substance, embarrassing, in contradiction to the European Convention of Human Rights and is also a touch rude. It was written with the intent of banishing Brian Haw - a man who has been holding a continuous demonstration against British terror attacks on Iraq for Four and a Half Years. But the politicians and legislators forgot that they weren't allowed to make new laws work backwards and therefore couldn't keep Brian Haw out of sight and out of guilty mind by putting him in prison. Brian remains to this day.

With the original intention of the law prematurely ejaculating through their grey fingers, and to avoid everyone laughing at them, the politicians tried to cover the law's very small, flaccid bill with a big suit of anti-terrorist, protective armour and attempted to turn it on to the rest of us! But their attempts to stop us from protesting, just like their attempts to take over our democracy are doomed from the start - their legislation will not stand tall as more and more people (including the coppers) see that SOCPA is already very limp indeed. At the end of the day, we know what these politicians are really afraid of - free speech in the commons!