For 64 days Naqshah Bib lay in the ruins of her kitchen. The earthquake flattened her house and the rest of the refugee town of Kamsar. She survived by drinking stream water that had trickled through the ruins, scraps of rotten food were found around her. She was discovered barely alive by her cousins and pulled from the rubble. Before being found she was just another of the many missing people from the town.

The nurses caring for her at Rawalpindi hospital are unsure of her chances. Her body has wasted and she is unable to communicate, barely aware of her surroundings. We don’t stay long, wishing her well and leaving some flowers. Her father who also survived has lost both his legs. 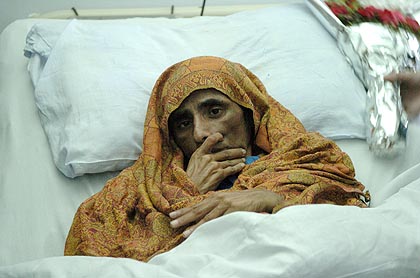 Naqshah Bib in hospital in Rawalpindi. 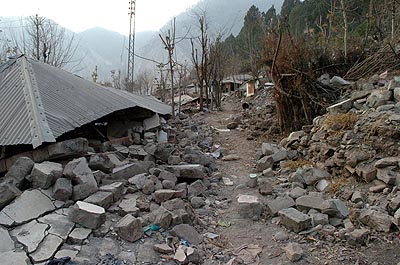 If nothing else, this miraculous story of survival exposes the total apathy of the mainstream media towards the earthquake crisis. There isn’t really any plausible reason why this story has made little news outside of Kashmir. The story was broken by a credible source: a BBC radio journo whom we met in Muzaffrabad. There was footage. There were plenty of witnesses.

Imagine if someone had been pulled alive from the wreckage of 9/11 after 14 days let alone 64? There would be round the clock updates, interviews with family, doctors and everyone involved. It would be a story that the networks would regularly return to on different anniversaries. Unfortunately Naqshah Bib is not a palatable icon for the western media. She is an impoverished Muslim refugee without any papers or identity in a Muslim country that the west calls an ally but would rather forget about. Her people will be freezing in crap cotton tents in sub zero temperatures this winter while the ‘Coalition’ looks the other way.

It is unfair to say this whole issue has been ignored by the corporate media. Ch4 news have kept it on their regular agenda and other news channels have periodically returned to it. But the sheer scale of the disaster suggests that the coverage it has received is well below what it should be. The money pledged in relief for this disaster so far is around 20% of what had been promised 1 month after the Tsunami. Of that less than 25% has actually been delivered. The facts of the earthquake speak for themselves: 87,000 dead 9,000 missing. 50,000 children disabled. 3,000,000 homeless. 2,200,000 at risk of malnutrition. 300,000 facing starvation. Worst of all is the looming winter. Hundreds of thousands of people are living under canvass and the NGOs are saying that 80% of the tents are not designed for winter use. Most of the places we have been to are expecting at least two feet of snow and sub zero temperatures in the near future.

The world has had three months to prepare for a second avoidable disaster which now seems inevitable.