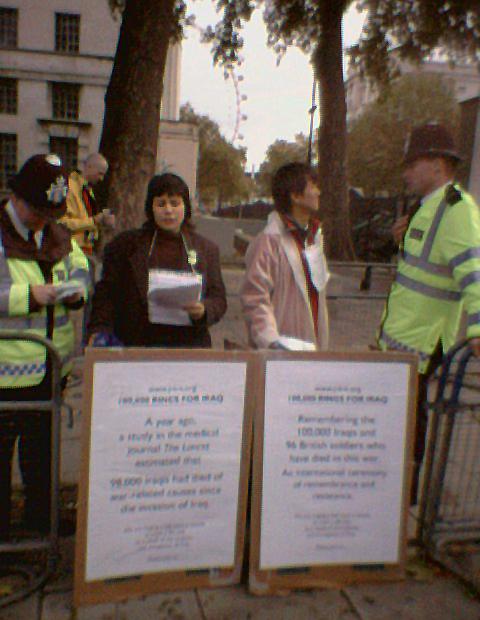 Today, Tuesday 25 October, two peace activists were arrested in Whitehall shortly after 9am for organising an unauthorised ‘bell-ringing’ remembrance ceremony marking the anniversary this week of the Lancet estimate that 100,000 people have died in Iraq of war-related causes.

Milan Rai, coordinator of Justice Not Vengeance, became the first person to be arrested as an organiser of an unauthorised demonstration under new legislation governing protests in the vicinity of Parliament.

The maximum penalty for being an ‘organiser’ of such a demonstration is a prison term of nearly a year, compared to a maximum fine of £1,000 for being a ‘participant’ in an unauthorised demonstration. All previous arrests connected with the new legislation have been of ‘participants’ rather than organisers.

The remembrance ceremony was to have consisted of four hours of bell-ringing to mark the deaths of 250 Iraqis and 97 British soldiers in the Iraq war, as part of an international project known as ‘100,000 Rings For Iraq’ www.iraqmortality.org. Rai and his colleague Maya Evans were to have read out the names of Iraqis and British soldiers while ringing a bell once every minute.

The 100,000 death toll estimate was published in the Lancet on 29 October 2004. Rai said: ‘Over a hundred thousand Iraqis have died. It’s time to replace British and US troops with a UN force.’