An action-packed documentary that glimpses into the shocking showdown between the monthly Critical Mass bike ride and the New York City Police Department in the months after August 2004.

Introduction and discussion with two of the film's directors, Andrew Lynn and Elizabeth Press.

Screened with shorts from the International Bicycle Film festival (45mins). 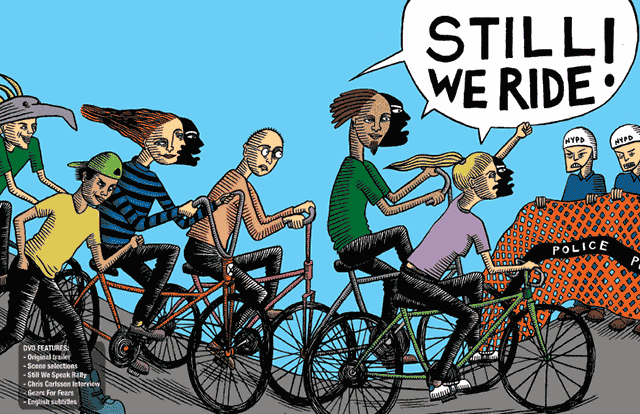 A documentary by In Tandem Productions - May 2005

On Friday 27 August 2004, just days before the start of the Republican National Convention, a massive police operation was underway. By the end of the night 264 people were arrested. It marked one of the largest mass arrests in New York City's history - and the arrested had done nothing illegal. For many New Yorkers, August was the first time they heard of what has become a monthly ritual for New York City's bike community - a free-forming ride called Critical Mass.

Still We Ride is a documentary that captures the joyous atmosphere of this August ride before the arrests began and the chaos that followed. It recounts how this ride first started in San Francisco over 10 years ago and chronicles the police crackdown and resulting court battles in New York over the last seven months. The movie takes on issues of civil liberties, surveillance, the power of mainstream media, and the benefits of alternative means of transportation.

Still We Ride The Movie