Yesterday the three day noborder camp in Klutsch, Bulgaria, finished with a collective border crossing to Greece.
Thereby long delays happened because of the Bulgarian border police, who searched 2 cars for hours.
Today the greek part of the “Noborder Action Days” started with an antirascist demonstration in Xanthi. 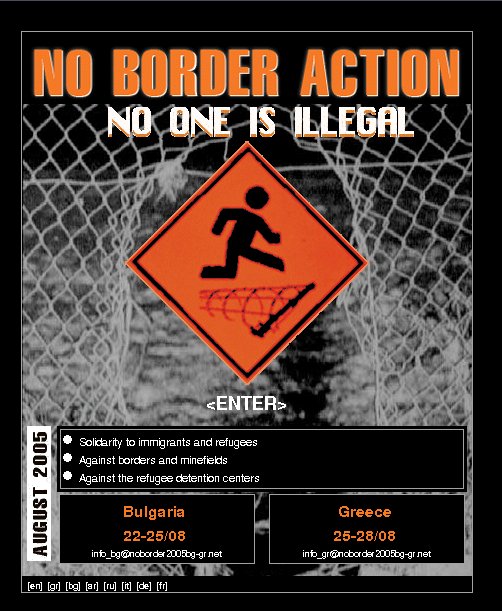 According to the topic: "lager bez granica" (camp without borders) circa 30 international and bulgarian anarchists gathered in the small village of Klutsch near the borders of Bulgaria to Macedonia and Greece.
It is the first time that a camp such like this one happened in Bulgaria and therefore the authorities tried to put obstacles in our way.
The local police demanded a list of all participants, because of a law, that international camps would have to deliver such lists and non-Bulgarians have to register with the local authorities within 24 hours.

The camping area was formerly military area and is now run-down but this is quite usefull for us. We could squat two unused buildings to cook and meet inside, the locals were happy about our presence and that we cleaned up and used the location, the kids were playing football and the atmosphere was quite friendly.

Unfortunately a planned hillwalking tour could not take place, because the location was too close to the border and we could have watched the main border crossing from there.
The border police stated we should and wait for a long time, because otherwise they would shoot in the border zone and it would not be allowed that people just go there.
There were a few small workshops, but not much happened.
The locals wanted to watch films with us, talked about the second world war and drunk Rakija with us,

Yesterday whilst crossing the border several smaller incidents occurred, after 2 cars were searched for a long time and we stressed out the greek side of the border with banners and our presence, a brutal non-uniformed cop beat, hit and kicked the people with the banner, whileas his collegues felt uneasy and demanded he should calm him down.
Nobody was arrested and after 6 hours we all arrived at the greek side.
The usual bullying and harassment for Bulgarians and other Non-EU-citizen were omitted this time, as the border police wanted to get rid of us quickly.
Such an action was taking place on the borders for the first time, critically seen it was a success, that we were able to assert ourselves.

The demonstration in Xanthi today focussed thematically on the muslim minority in Xanthi, there were about 100 -150 participants with anarchis flags, banners in bulgarian, greek and turkish and it was a loud demonstration, the policing was low-key.
Near a police station riot cops were present, but otherwise we were just accompanied with few uniformed cops without any weapons.

Tomorrow it is planned to go to a deportation camp to show solidarity with the prisoners there.
More reports and pictures are to follow...