Update (03/03/05): The authorities were left looking rather silly when the protest camp disappeared under cover of darkness, the night before a massive eviction was staged. A demo is planned for 9:15am this Saturday (5th March) at Wing Hill Roundabout, near Linslade.

Local residents near Linslade in Bedfordshire have been disrupting work on the Stoke Hammond to Linslade Bypass, a new £50m road which is the first part of John Prescott's "development" plans for the region, including a massive expansion of Luton airport. The 5 mile planned route cuts across some beautiful open countryside and includes the destruction of several groups of trees. 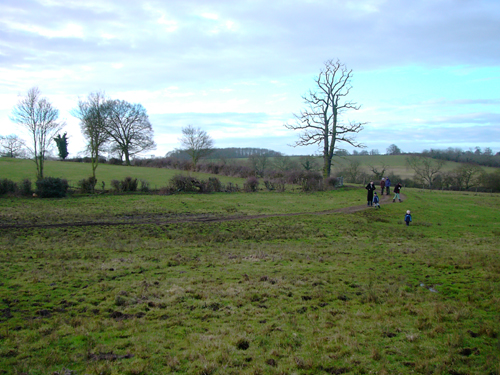 Work was expected to start on Monday 17th, but a large turnout by protesters apparently put off the contractors, and the day was spent talking to reporters and trying to determine if any work was taking place on other bits of the route. Contractors were seen hanging around in some areas but then left.

On Tuesday contractors were again seen hanging around but then left, surveyors were out working and there was what seemed like a general attempt by police to intimidate protesters.

On Wednesday morning there was intense police activity and bulldozers being turned away by protesters. Despite a concerted effort by contractors and police to bring chainsaw vehicles and a digger onto the land during the day, work was completely blocked by local residents linking arms in front of the vehicles and two others chaining themselves to the digger.

The two who were locked-on to the digger were arrested for aggrevated trepass and have been bailed away from the bypass route. They plan to use their court case to challenge the legality of the road scheme.

On Thursday morning the digger left Valley Farm, and heavy machinery work was suspended for the rest of the week on police advice. Surveying continued in preparation for a planned fence along the bypass route.

In Oxford on Saturday evening at 6pm there was a meeting at 109 Hurst Street for people interested in supporting the protests.

Update (27/01/05): A camp has been set up and needs support [pics], but work is continuing as protesters are outnumbered by police and hired security.

Note for Oxford IMC readers: This feature is included on Oxford Indymedia because of the (relative) proximity of Linslade to Oxford and the involvement of some people from Oxford in the protests.