Things have recently got much worse for CIPO-RFM. When we met them before Christmas there was a lull in the repression. Right now (December 29th 2004) a brief look at their website suggests that the Oaxaca government have started a new campaign against them using the Police and the media. There has never been a more urgent time to support them in whatever way you can…… 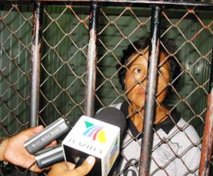 The repression is getting worse!!

There is a new media campaign slander against the organisation its aims and objectives. An attempt was made to arrest an organizer of CIPO-RFM during a workshop in front of Oaxaca cathedral. The attempted arrest was only thwarted by the immediate intervention of those present who were supporting the event. Three foreign observers were detained by the INM (Special Forces).
After these events the assemblies met and following a night of discussions which went on until the early hours decided to invite the governor of Oaxaca to a public dialogue.
The meeting was to take place on Monday 27th of December at 5.00pm at the offices of a human rights commission responsible for monitoring Oaxaca. As arranged a delegation from CIPO-RFM arrived for the meeting. Despite the short notice delegates from six indigenous communities were present to prove their willingness for a dialogue. No governmental representatives showed up and the staff at the building claimed that they only knew about the meeting from the media. CIPO-RFM delegates were refused access to the building. The delegation were only allowed in after 45 minutes when they insisted (as is their right) on making a formal complaint about the governor Ulises Ruíz for not responding to their petition. While making their complaint the ‘human rights’ worker made a call to their president to say what was occurring. 20 minutes later Mrs Rosario Villalobos (wife of local MP and coordinator of the human rights commission for Oaxaca) appeared and immediately claimed that she was there by coincidence. She also claimed that she only heard about the offer of talks from the media. She offered to take their petition and give them a reply within 10 days. This was widely felt by all to be a total insult. It was clear that the authorities were not interested in dialogue.
The following morning the Secretary General for the Oaxaca government announced in a newspaper interview his intention to evict CIPO-RFM from their headquarters in the Oaxaca suburbs where they have been since 2000.
There is little doubt that the government intend to enforce this threat with violence. CIPO-RFM activists will resist any eviction attempt no matter what the consequences.

On December 17th an attempt was made to evict a communal house being used by CIPO_RFM activists.
December 18th a media slander campaign was launched against the organisation.
December 22nd the protest camp was yet again violently evicted from the town centre. All their possessions were again confiscated.
December 24th local and regional cops violently evicted a licensed street vendor selling indigenous crafts on a Oaxaca beach.
December 27th Juan Diaz a regional CIPO-RFM organiser was attacked by Jose Ruiz regional PRI* leader. (*PRI are Mexico’s rightwing party)

There is clearly a present escalation of attacks against CIPO-RFM and its activists. The Oaxaca government will only be able to get away with this for as long as they think that no one else cares. CIPO-RFM desperately needs money and support. It is vital that the Mexican government (who have always been image conscious) know that people are monitoring their behaviour.
Donating money can be done through the website (see below) as far as letting the governor of Oaxaca and his superiors know that we are watching……well use your imagination……