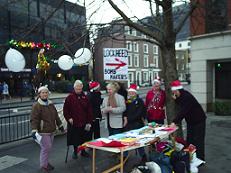 This event was planned by the Muriel Lester Affinity Group. Previously they had D-locked the doors of the building shut for several hours but this being the season of good will they changed tack and eight of us, with an average age of around 65, dressed up in Reindeer Horns and red hats for a Christmas celebration. We handed out information leaflets and got people to sign cards for the Lockheed employees. These were handed in with a large card from Trident Ploughshares the anti nuclear campaign. So many people were keen to know more and supported us in asking to get rid of WDMs. Locals were surprised to know what was going on in this building and some were worried they could be a target of terrorism. The PSC Union brought us hot drinks which added to the cheer.

We were pleased to be allowed into the building to deliver the cards. Two women went in but were not allowed to reach the Lockheed offices and had to make do with giving the cards to a PR woman in the front lobby. Others sang an alternative version of Rudolph: Lockheed the big bomb maker / Does some very nasty work / Building new nuclear weapons / Carlisle Place is where they lurk. Chrous: Lockheed breaks the law at will / With bombs of awful might / We must get them out of here / and make them do what's legal and right

Even though this was a small action we shocked people by revealing Lockheed Maritin’s VISION "As an increasing number of nations of all sizes around the world indicate the desire and capacity to develop nuclear, chemical and biological weapons of mass destruction it is necessary to expand our field of vision" They AIM " to sustain capability to design a warhead to succeed Trident by facilitating production of British nuclear warheads". And describe their FUTURE " We can now look forward to a long-term stable future for AWE and for the UK nuclear weapons programme". Lockheed Martin have a £5.3 Billion UK government contract to design and build a new generation of nuclear weapons to succeed Trident at Aldermaston AWE. International Law experts consider that this violates the Nuclear Non-proliferation Treaty signed in 2000 by 188 countries including the UK who are therefore also damaging this vital treaty.