This is a short report of some of the events at the ESF with a look at the lack of mainstream media coverage of the forum. 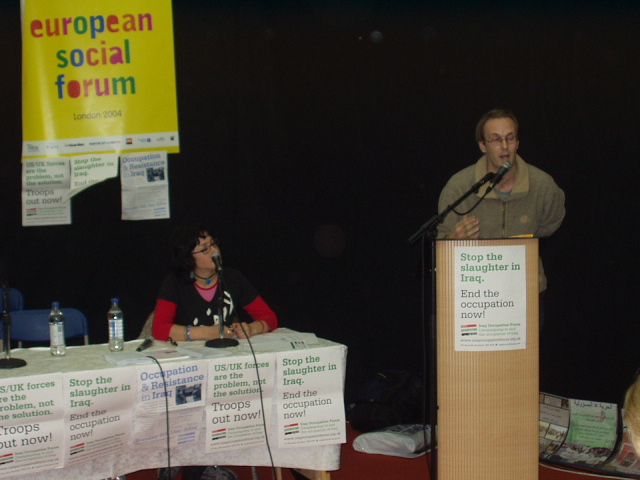 `Making another world possible` was one of the slogans of the third European Social Forum held at London’s Alexandra Palace from Friday 15th to Sunday 17th October. Tens of thousand of people flocked to North London from all over Europe with the first 20,000 receiving free London travel passes. Free accommodation was available with many sleeping in the Millennium Dome at a charge of 10 pounds for 3 nights.
On Friday 15th in Great Hall 9 there was a seminar on plan Colombia when Colombian Jahel Quiroga spoke through a translator. She said that Globalization was destroying lives in Colombia and around the world. People who challenge the policies of privatisation receive death threats.
In Great Hall 6 there was a seminar entitled `Ending the occupation and liberating Iraq` which was chaired by Ewa Jasiewicz of Voices in the Wilderness. The seminar was proposed by Iraq Occupation Focus (UK), Voices in the Wilderness (UK), CADTM (Belgium) and focus on Global South (Asia). Speakers included Gabriel Carlyle of Voices in the Wilderness, Eric Toussaint of CADTM, Nahla Chahal (of CCCP, France) and Iraqi-born novelist Haifa Zangana. It was revealed that there are over 5,000 prisoners in the American controlled sector while the British around Basra have over 3,000 prisoners in their custody.
In West Hall I there was a plenary on `End the occupation of Iraq`, which was chaired by Lindsay German of Stop the War coalition UK. The meeting, which started at 7pm, was due to be addressed by Subhi Al Mashadani who is the general secretary of the Iraqi Federation of Trade Unions. He was appointed by former Iraq administrator Paul Bremer and is disliked by many in Iraq especially the Kurds who were present at the plenary in large numbers. He had been due to speak but the Iraqis present kept heckling and booing him and there many chants of “Off, Off, Off!” A number of them tried to rush forward to the stage where he was standing but were kept back by security. The consensus had been that he would be allowed to speak briefly and then there would be a mass walkout to show the disgust at the occupation and those associated with it. Eventually the plenary was abandoned at 7.40pm amid ugly scenes.
The mainstream media largely ignored the ESF with there being no coverage in the anti-war Daily Mirror for example and there was nothing in the evening ITN news of Friday 15th or the BBC evening news of Saturday 16th. The Guardian of Friday 15th had an article on page 27 by Susan George in the Comment and Analysis section. Headlined `This is the way to win` She lamented the fact that “Not many Britons are aware that tens of thousands of thinkers and activists from across Europe and beyond gather this week in London for the third European Social Forum (ESF)” The Independent had a piece on page 18 on Saturday 15th but searches of the Daily Express, Sun and Daily Telegraph websites showed no results for the ESF. There were a couple of small pieces in the Daily Mail while disappointingly there was nothing on the Channel Four website. Sunday morning’s `Breakfast with Frost` on BBC1 did mention the forum briefly and showed scenes of the crowds gathering for the anti-war demo near the London Eye (a giant Ferris wheel).
One labelled photo is attached.