Unoffial industrial action at Opel car plant in Bochum, Germany will bring production in all General Motors car production in Europe to a standstill. GM threatens to sack 4000 of 10.000 car workers. Factory gates are being occupied since last thursday night shift. Families flock to gates to support strikers. On thursday 19th a European day of action is called for in all European GM plants. Last news: 1 pm ECT: ESF meeting sends solidarity greetings signed by 400. 5 pm ECT: GM is preparing for lockout, police sighted, millitants ask Bochum citizens for a "all out" to gather at gates. 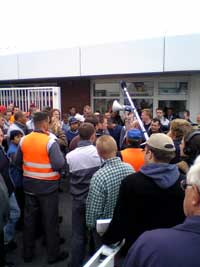 By Monday or Tuesday car production in General Motors plants in a plant in Poland, Antwerp and Elsemere will come to a standstill. Angry workers at Opel car plant in Bochum, inside Germany´s industrial heartland - the Ruhr, brought production to a standstill.
5000 Workers have downed tools since Thursday afternoon - or are rallying around the car plant in Bochum. Industrial action started in protest at plans by parent company General Motors to slash some 4,000 jobs at the plant. Work continued without disruption so far at Opel's Ruesselsheim plant which is also earmarked by the US auto giant for the reduction of 4,000 jobs.
Militants in Russelsheim, Southern Germany, had been disciplined by their union earlier this summer, after a walk out which resulted in a motorway blocking. But the grip of the union on the work force seems to loosen. Union bureaucrats try to hold staff down. But tv crews described the mood of a whole region largely dependent on Opel car industries as sombre and angry.

This unauthorised wild cat action looks rock solid. Families and even children rush to the car plant and set up food stores, the money bucket is passed round. Even if industrial action should not spread beyond Bochum, this unofficial strike will bring production in GM car plants to a standstill from Poland right across Europe to Britain. Bochum produces essential parts for cars. The workers in the Ruhr have GM by their throat.

Management secretely began loading essential parts on lorries as soon as industrial action begann and hid them on the ground of one of Europe´s largest car plants. But the transports were spotted by the strikers just in time. "Nothing is getting out" - a militant was reported stating to a Bochum support group.
Already, production in Antwerp GM plant is said to have slowed down. Rumour has it that Antwerp workers plan solidarity action.

Nevertheless, acts of solidarity, particularly in Britain - now that the ESF is taking part - would be more than welcome. Unthinkable if - for many years since - car workers in Britain were to take action in solidarity for their German mates. Send solidarity adresses to: