The kurdish politician Nuriye Kesbir decided to go on hungerstrike on the 7th of may against the threat of her deportation. A dutch court has approved her deportation, the final decision lies with the dutch ministery of justice. A campaign or protest has been started, as Kesbir is endangered with torture if returned to Turkey. 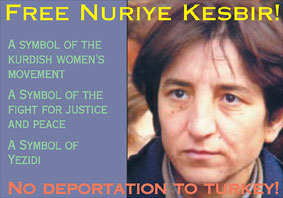 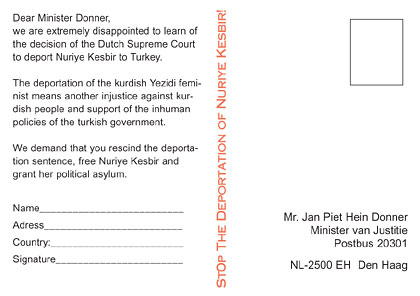 This postcard can be ordered -

Since 5th of march 2004 Nuriye Kesbir, member of the executive council of Kongra-Gel is again in a dutch prison.
On the way to another court hearing she has been arrested in front of the court building - the turkish state wishes Nuriye Kesbirs extradition - and is since then located in prison in Breda.

At another court hearing on the 7th of may in front of the Dutch High Court in Den Haag the court decided that it is allowed to turn Ms Kesbir over to Turkey.
The last decision on handing over Nuriye Kesbir the to the turkish torturers lies in the hands of the dutch minister for justice Piet Hein Donner.
An extradiction to Turkey means another erosion to the right for asylum.
Lifelong imprisonment and torture awaits Nuriye Kesbir in Turkey.