Soon at the world theatre 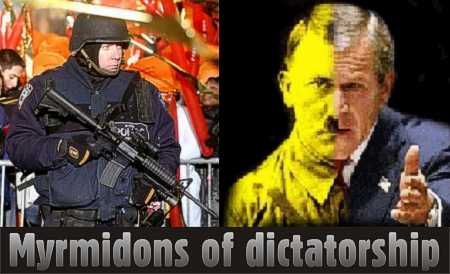 After France was blamed as a enemy of United States representative for the reluctant Europe, after the U.S. policemen have quietly changed their uniforms, helmets and machineguns to military equipment only distinguishable from military forces by blue colouration, the think tank of this regime has begun to create a new dangerous threat in a nazi propaganda manner to blind again the scared american sheeps for a strong argument of overturn the USA to a dictatorship. The test stage is now completed with the largest blackout in U.S.history (simply a test how to handle panic stuations and reestablishment of order) and now with the fake orange alert (testing the centralized control of crowd by police, military troops, snipers and agents in a simulated state of emergency).

The former U.S. backed Nazis lost their war against the 'red hordes' because they failed to get arbitrary access betimes on oil resources in Kaukasus and Middle East. The Bush regime has learned and they used fake threats to get the main resources under control, existential for all industrial nations, with simple raids called 'war on terror'so they are now able to direct arbitrarily Europe & China to a economic disaster. They have learned opposite to Nazi myrmidons to embed religious fanatics to telecontrol the God-fearing crowd by their belief.

"The Lord has just blessed him," the religious fanatic broadcaster Pat Robertson said of Bush. "I mean, he could make terrible mistakes and comes out of it. It doesn't make any difference what he does, good or bad, God picks him up because he's a man of prayer and God's blessing him.", "I really believe I'm hearing from the Lord it's going to be like a blowout election in 2004. It's shaping up that way."

At the latest in the year 2005 all broadcasting stations will start to perforate the american brains with this 'deadly cognition' officially detected in good time by American's glorious god blessed leader. It has now begun. Read the first trial balloon published by the right wing magazine newsmax.com

And if Americans will not see the signs they can remember this words when they are in jail as political prisoner like 10,000 Iraqi people fighting against an illegal raid or 650 so called illegal afghan fighters protecting their homeland against an agressor, or when the army pick them up for the holy war against the 'anti christ' (original issued to 'red hordes', copyright by Josef Goebbles the precursor of Propaganda Battle) This administration shit on democracy in USA, in Afghanistan depraved to a mega drug store, Iraq and any country in the world. These bloodhounds are only interested in timing the master plan, the number of dead is irrelevant. This dealdy regime has no formular for the impending economic disaster, they only know that not later than 20 years the U.S. economy will play a viewless underpart in comparison with China & Europe and they have only one answer - using the world as freebie self-service store endless war of economy and at least the absolute war to protect their sole world supremacy. With an democratic nation you can not wage a total war of agression, the lessons of Rumsfeld on Vietnam war yield fruits. The only sense of an totalitarian nation is the surety for frictionless wars. You can figure it out, you only have to play a PC -Simulation like Sid Meiers Civilization

Act now 'cause the time frame is closing rapidly


As incredible as it may be to believe, three years before the Sept. 11 bombing of the World Trade Center a Chinese military manual titled Unrestricted Warfare touted such an attack – suggesting it would be difficult for the U.S. military to cope with.

Here is an excerpt from Unrestricted Warfare:

“Whether it be the intrusions of hackers, a major explosion at the World Trade Center, or a bombing attack by bin Laden, all of these greatly exceed the frequency bandwidths understood by the American military...”

Surprisingly, Osama bin Laden is mentioned frequently in this book.

Now NewsMax.com is making the CIA translation of this shocking book available to all Americans.

On Sept. 11, 2001, Americans and the world witnessed one of the most horrific acts ever to take place on American soil.

Our media and government were quick to declare the acts of that day as simply terrorism by a nationless group known as al-Qaeda.

In reading China’s military manual Unrestricted Warfare, you will learn that the events of Sept. 11 were not a random act perpetrated by independent agents.

Instead, Chinese military planners believe that terrorism is just one of the many tools at the hands of nations and their terrorist allies to wage total war against the United States.

You will be surprised to learn:

The two PLA colonels who authored Unrestricted Warfare have been hailed as heroes in China since Sept. 11 The Chinese state-run propaganda machine is cashing in on the terror attacks ... producing books, films and video games glorifying the strikes as a humbling blow against an arrogant nation.
Chinese Communist Party officials are saying that President Jiang Zemin has obsessively and gleefully watched and re-watched pictures of the aircraft crashing into the World Trade Center.
The CIA’s own translation agency reported that this book identifies the U.S. as China’s main enemy, and details how a weak nation can destroy America using unorthodox attacks – like the 9-11 attacks.
China is preparing itself and encouraging others to engage the U.S. in total war. The book is chock full of plans and strategies, from using computers, to smuggling illegal immigrants, to manipulating the stock markets, to influencing the U.S. media, to using weapons of mass destruction – all to destroy America.
Recent press reports indicate that China has assisted and continues to assist militarily and economically the Taliban and al-Qaeda – even after Sept. 11.

The doctrine of total war outlined in Unrestricted Warfare clearly demonstrates that the People’s Republic of China is preparing to confront the United States and our allies by conducting “asymmetrical” or multidimensional attacks on almost every aspect of our social, economic and political life.

The media and Congress are keeping a lid on this book because of the implications of U.S.-China economic and trade relations.

But now you can bypass them by getting a copy yourself!

Here’s what others say about Unrestricted Warfare:

“You need to read Unrestricted Warfare because it reveals China’s game plan in its coming war with America.. ... China thinks it can destroy America by using these tactics.”

“The 9-11 attacks may just be the beginning. Many terrorist nations and groups will try to imitate this operation … and China’s war book nrestricted Warfare will be their text.”

“Unrestricted Warfare is evidence linking China to 9-11. It is also their plan for global operations against America.”