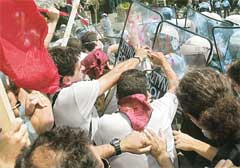 
The Sruggle Inititative bloc was formed to fight against the Greek European presidency in the EU for the last six months by several Anticapitalist left organisations and parties and also by trade unions and a lot of independent left-wing people. Its indisputable political platform was against EU-Government-Capitalism-Imperialism.

Leaving behind the 2 other poles/parts (as we call them) of politically bankrupt and reformist tendencies of Left in Greece.
1) the Communist Party (which is a pro-USSR party whose political platform consists of a front against Imperialism and Monopolies resulting to coalitions of workers with a so-called progressive patriotic part of the bourgeoisie for the establishment of Peoples Power and Economy (as they call it) via a peaceful road to Socialism, not recognizing the only way to overthrow capitalism which is by a revolution.) The C.P. of Greece has about 5% of the votes and few members in the parliament.
2) Greek Social Forum which consists mainly of a party called Coalition of Left and Progress (Synaspismos) which is a pro-EU party with a political platform ranging from (in the best case) anti-neoliberalism to (in the worst case) pro-governmental coalitions and political leanings. It too has 5%.
The Social Forum has also several Trotskist parties and a antirevisionist-Maoist party all adopting the reformist platform of the Social Forum.


About 3000 people present in the Anticapitalist Radical Left bloc of Struggle Initiative attempted to break the red zone outside of the hotel.(Another bloc of members of an activist group called Virus and the libertarian-AntiAuthoritarian bloc called AKSalonica of more or less the same amount of people attempted to break the red zone via another road).

The majority of the block was supplied with appropriate masks or bandanas and wooden red flags. Human chains were formed from top to bottom of the bloc. A double human chain was formed at the left side of the road (towards the field) to block a side attack by two groups of cops. The head of the block was confronted with cement-stones which on top of them barbed wire was tied. After carefully removing the metallic strings that held the barbed wire comrades with the help of thick stakes threw it away towards the beach. Then the head of the bloc jumped over the stones and started a clash with the cops. They answered with gases in front and to the side of the bloc. The side human-shields waited for the comrades in front to subside while other comrades threw stones to prevent a sudden attempt of the cops to come even nearer to the bloc. The bloc reformed meters back while comrades still threw away stones to delay the police's marching.

The bloc shouted (this is a rough translation from Greek)
-People ahead,Down with the EU,
-With the Left of overthrow, for the revolutions of the new era
-Fascist Semite(that’s the prime minister’s name) you won’t stop us the future belongs to the working class
-In these streets ,in this society one day revolution won’t be a utopia
-Our future isn’t capitalism it’s revolution and communism

All the slogans were characterized by anti-EU and anti-governmental sentiment.