Culminating a week of events called by the Campaign Against the Europe of Capital,up to 500,000 people marched through the streets of Barcelona on March 16 to protest the summit of European leaders. Protesters faced widespread police violence, including the use of rubber bullets and tear gas, despite the fact that the majority of protesters were peaceful.
SEE IMC UK Breaking News Sat 16th.
Photos: 1 | 2 | 3 | 4 | 5 - Videos: 1 | 2 | 3

The previous day up to 20,000 people took part in decentralised actions all over the city. Many were attacked by riot police with what one Reuters correspondent called "the considerable force that is a trademark of the Spanish riot police". The legal team confirmed a total of 109 arrests over the two days.
SEE IMC UK Breaking News Fri 15th.
Photos: 1 | 2 | 3 | 4 | 5 | 6

The week of protests started with 3000 people holding a reclaim the streets party on Sat 9th (report | video), and included a 100,000 trade unions demonstration on the 14th. 400,000 people also protested on the 10th against further privatisation of the water supply (report), and the National Hydrological Plan, which would re-route the biggest river in the Spanish State.

While much of the planning for the week of events had sought to minimise confrontation, the denial of basic rights that is now becoming commonplace in Europe was widespread - although not wholly unexpected - in Spain. Statewatch had previously reported on the Spanish State's latest criminalisation strategies to quell dissent.
See evidence of police agent provocateurs in Barcelona: Video . Photos 1 | 2 | 3 | 4

Also on March 16th, a 20,000-strong Street Party took place in Rome to support Radio Onda Rossa and Italy IMC for free and independent information.
The street party was called after four Italian social centres, allegedly housing Indymedia centres, were raided by the police on Feb 20th. During this operation the police seized audio and video material referring to the anti-G8 actions in Genova last summer, and confiscated computers, archives, and equipment needed by hundreds of Italian activists for daily cultural and political activities.
In Italy the attack on independent information has also concerned Radio Onda Rossa - an independent radio station in Rome. On January 22nd, the ministry of communications officially notified that its broadcasting license will be revoked. 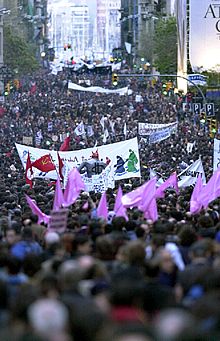