Edinburgh Chiapas Solidarity Group denounces the escalation of oppression that the Mexican government is inflicting on its own citizens.

On the 4th May 2006 3,000+ state and federal police violently attacked the town of San Salvador Atenco in the State of Mexico. During the raid the police violently and abritarily arrested more than 270 civilians including women, elderly people and children. Most of the detainees suffered serious injuries as a result of severe beatings prior to arrest and once in police custody. Most of the female detainees were sexually abused and at least seven were raped by police officers. An unarmed fourteen year old boy, Javier Cortes, was shot dead at point blank range and a twenty year old student, Alexis Benhumea has since died as a result of injuries inflicted by tear gas canister fired at his head. Three foreign nationals, one Chilean and two Spanish women, were arrested, beaten and sexually abused before being expelled from the country. Once in prison, detainees were denied access to doctors despite some having suffered serious internal injuiries as a result of police beatings. Twenty eight people remain in prison awaiting trial on serious charges that we fear are politcally motivated as many belong to grass roots political organisations that are in opposition to the corrupt government. 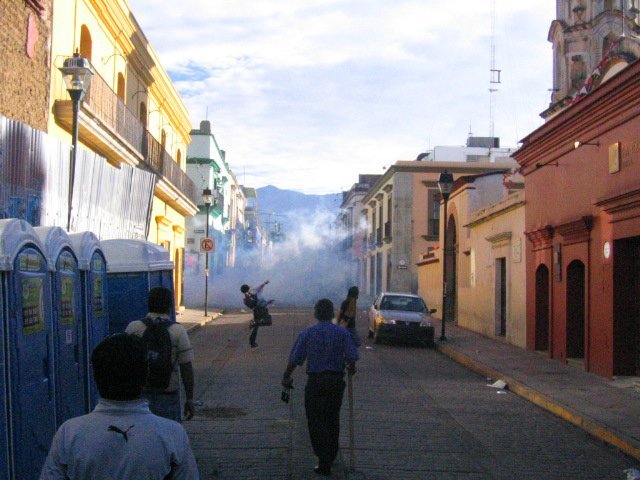 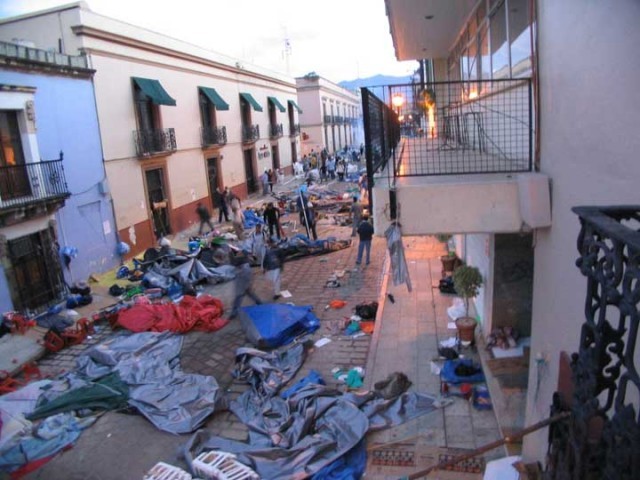 destruction of the camp

Also on the 4th May the treasurer of the Autonomous Council of San Blas Atempa in the state of Oaxaca, Faustino Acevedo Bailon, was assasinated by unidentified persons. He had been involved in a popular struggle against the local government and was on his way to the 4th National Indigenous Congress when he was murdered.

Now, more human rights abuses are taking place in Oaxaca City. A huge occupation of the city centre by striking teachers and other local people was violently attacked by police on Wednesday 14th June. Police fired large amounts of tear gas indiscriminately into the crowd, including from police helicopters. Reports state that 92 people were injured by the police assault. A pregnant woman suffered a miscarriage as a result of the police violence. Although the local citizens have re-occupied the city's central square there have been reports of people being killed by the police, with many others injured, arrested or 'disappeared'. We are extremely concerned for the safety of those still involved in the protests and those who have been detained or are missing.


We are extremely concerned for the safety of those still involved in the protests and those who have been detained or are missing. All this is taking place ahead of the forthcoming Mexican elections in July and all three main political parties (the PRI/PAN/PRD) have been involved in carrying out the abuses.

Edinburgh Chiapas Solidarity Group calls on the Mexican Government to:

- Drop all remaining charges against those arrested in Atenco

- Release without charge all those arrested in Oaxaca

- Put an end to all acts of repression against the people of Mexico
We call on the British press to not ignore what is going on in Mexico but to investigate these terrible human rights abuses and report them so that people in this country can see the reality of what is happening.
We call on human rights organisation to investigate the abuses and act to stop the Mexican Government perpetrating violence against its people.
We call on the British Government to persue whatever avenues of diplomacy it has at its disposal to protect the victims of this oppression.
And finally we call on all UK citizens, political parties and organisations, trade unions, NGOs, charities and autonomous groups to protest the repression and echo the above demands by spreading information, making public statements, writing letters to the Mexican Government and Ambassador to Britain and taking part in any demonstrations that are organised here in the UK.

Please write to the following denouncing the ongoing repression in Mexico:

Permanent Mission of Mexico to the United Nations in Geneva.
E-mail:

Attorney General of the Republic,
E-mail:

General Judiciary Council of the State of Mexico. E-mail: